Manny Pacquiao: ‘Too much democracy is bad for the Philippines’ 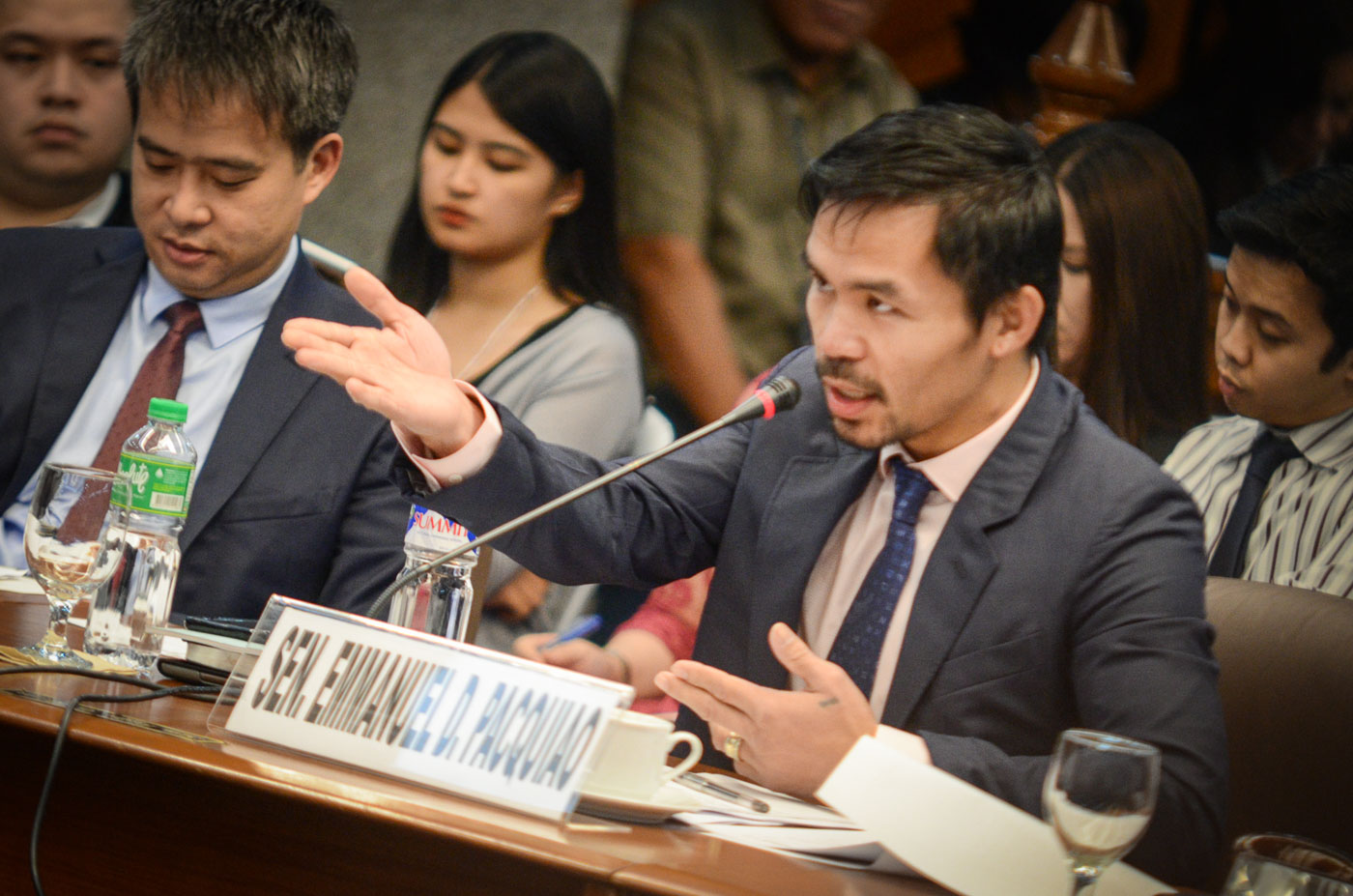 In a Rappler Talk interview aired Friday, March 1, the world boxing champion turned lawmaker was asked to comment on the state of democracy under his ally President Rodrigo Duterte.

“Alam mo nandyan pa rin yung democracy, under 1987 Constitution pa rin tayo. And naniniwala ako because of too much democracy kaya nagkaganito ganito. Lalong dumami yung corruption, tumigas yung mga tao, walang disiplina (Democracy is still there. We are still under the 1987 Constitution. I believe there is rampant corruption and lack of discipline because of too much democracy), ” Pacquiao said.

“’Yun ang problema natin (That is our problem). Although we want democracy, too much democracy is bad for our country…. Kailangan may disiplina ang tao kasi kung ano gusto ng tao, gusto nila insist nila na ‘yon masusunod, eh may government tayo na dapat ang tao sumunod sa government (The people should have disipline because some insist that they should be followed. The people should follow the government),” he said.

Citing the need for peace and order, Pacquiao said the President had to “discipline” Filipinos, just as a parent disciplines his or her children. (READ: 4 out of 5 Filipinos worry over extrajudicial killings – SWS)

(Has the president been convicted for the killings. None. The people are just judgemental that’s why we think this way. In fact, if we look at it, hundreds of cops have lost their jobs.)

While Pacquiao lamented the supposedly excessive democracy in the Philippines, he cited the freedoms enshrined in the Constitution to defend his stand against laws banning political dynasties and turncoatism.

“Yung [batas laban sa] political dynasty makakaapekto yan sa ano mo eh, yung free will mo, kasi demokrasya nga tayo kasi pipili mga tao. ‘Di naman ilalagay, iboboto ng mga tao. Meaning tao ang pipili, hindi yung sarili mo o someone put them there (The law against political dynasty will affect people’s free will because we are in a democracy, where people will choose their leaders. The leaders will not be appointed, they will be elected by the people),” he said.

Article 2 Section 26 of the 1987 Constitution mandates “equal access to opportunities for public service and prohibit political dynasties as may be defined by law.”

Pacquiao, however, was noncommittal when asked if he would vote in favor of such legislation in the 18th Congress.

“Maganda naman performance nila, pagtulong sa tao. Ang tao naman pipili. Ngayon, kung may bahid ng corruption, may bahid ng nagnanakaw kami, ako pa mismo magsabi sa tao na ‘wag n’yo iboto (They have good performance and track record of helping people. The people are the ones choosing them. If we have corruption issues, I would be the first to tell the people not to vote for my relatives),” he added.

In 2010, Pacquiao won as a representative of Sarangani Province. He was reelected in 2013 while his wife, Jinkee, was elected as vice governor. He then won as senator in 2016.

Two of his brothers are also in politics. Rogelio “Ruel” Pacquiao is the incumbent Sarangani Representative while Alberto “Bobby” Pacquiao, who won as General Santos City councilor in 2016, is now running for OFW Family Club party list representative.

As for a law against political turncoatism or politicians’ shifting of political parties come election time, Pacquiao said:

“Studyhan natin mabuti baka makaapekto na naman sa kalayaan mong lumipat o pumili…. parang pinipigilan siya lumipat kung ayaw nya don (Let’s study it furhter because it might affect people’s freedom to transfer or choose…. It’s like preventing someone to transfer when he or she no longer wants it there),” he said.

Pacquiao was a member of former president Gloria Arroyo’s political party, Kabalikat ng Malayang Pilipino (Kampi), from 2007 to 2009. He left in 2009 to run for congressman under the Nacionalista Party.

After the 2010 elections, he joined then president Benigno Aquino III’s Liberal Party (LP) and stayed there until 2012 when he moved to PDP-Laban.

In the May 2016 polls, however, he ran under former vice president Jejomar Binay’s United Nationalist Alliance. In 2016, he again took oath as PDP-Laban member.

Pacquiao also has a local party, People’s Champ Movement, which he intends to become a national political party in 2022. (READ: President Pacquiao in 2022? ‘No plan’ but wants own national party) – Rappler.com