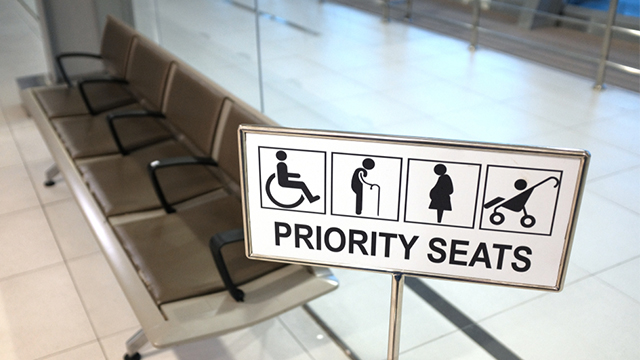 “Despite the existence of national laws and other ordinances establishing special lanes and other privileges for the said sectors, there is still a need to extend additional reasonable accommodation in all private and public establishments in keeping up with their special needs and concerns,” the Quezon City local government said in a statement Tuesday, March 5.

The local ordinance, introduced by councilors Donato Matias and Franz Pumaren, requires all establishments in Quezon City to provide a courtesy seat signage in the designated seats. Other persons occupying the courtesy seats must give way to PWDs, pregnant women, and senior citizens.

Private establishments that fail to implement the new policy will face the following:

All government institutions in Quezon City, meanwhile, will receive a warning from the Office for Senior Citizens Affairs, the Persons with Disability Affairs Office, and the Social Services Development Department on the first offense, and corresponding penalties for subsequent offenses. – Rappler.com