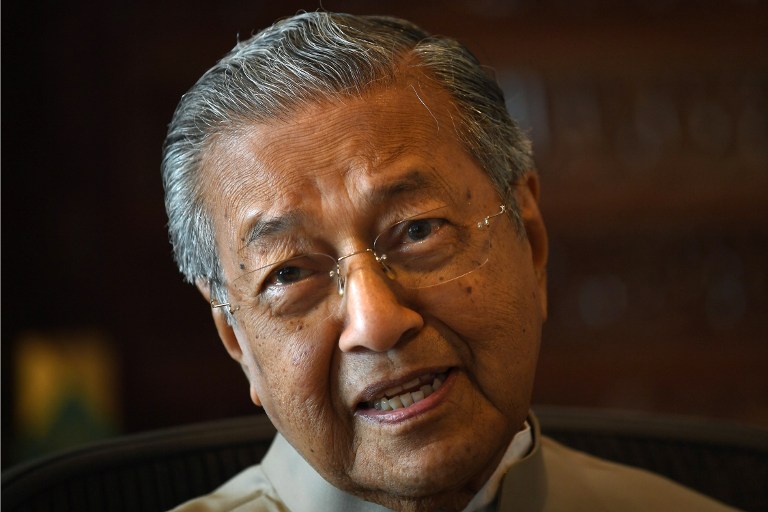 MANILA, Philippines – Malaysian Prime Minister Mahathir Mohamad arrived in Manila for his two-day visit, a trip that will include a meeting with Philippine President Rodrigo Duterte.

Mahathir’s plane landed at the Villamor Air Base in Pasay City at around 7:45 pm on Wednesday, March 6.

After stepping out of his plane to military honors, Mahathir was welcomed to Manila by Acting Information and Communications Technology Secretary Eliseo Rio and Betty Medialdea, wife of Executive Secretary Salvador Medialdea. Also part of the welcoming party was former Department of Foreign Affairs spokesman and now Ambassador of the Philippines to Malaysia, Charles Jose.

He will then meet with Senate President Vicente Sotto III and House Speaker Gloria Macapagal Arroyo.

As with all visiting heads of state, Mahathir will offer a wreath at the monument of national hero Jose Rizal at Luneta in Manila.

He will then head straight to Malacañang for the official welcome ceremony and meeting with Duterte and members of the President’s Cabinet.

There will be two meetings at the Palace. The first is a “restricted meeting” between the two leaders. This will be followed by an expanded bilateral meeting, which means the two leaders will be joined by their Cabinet members and ministers.

After the two meetings, Duterte and Mahathir will give their joint statements to the press. According to Malacañang, media will not be allowed to ask questions.

The Malaysian prime minister will cap his visit with a state banquet in Malacañang, hosted in his honor by Duterte.

This won’t be the first time Mahathir is meeting Duterte.

In July 2018, he and Duterte sat beside each other during Senator Manny Pacquiao’s fight against Lucas Matthysse in Kuala Lumpur.

At 93 years old, Mahathir is the oldest statesman in the world.

His 22-year rule as prime minister before he came out of retirement in 2018 to challenge corruption-tainted Najib Razak has lent him a gravitas among Southeast Asian leaders.

Though criticized for his authoritarian tendencies, which include jailing political dissidents, Mahathir’s first stint as prime minister from 1981 to 2003 had largely been perceived as a time of prosperity for the Asian country.

His shock victory in 2018 toppled Najib and ended the 6-decade rule of the Barisan Nasional coalition. But Mahathir now faces the mammoth challenge of paying off Malaysia’s $250-billion national debt and dealing with China despite his decision to cancel several costly Beijing-backed mega-projects.

In contrast, Duterte has embraced China assistance, including loans and grants, for major infrastructure projects.

Malacañang has said Duterte and Mahathir will discuss issues of mutual concern.

Among concerns the two leaders share are security challenges. Both Malaysia and the Philippines regularly deal with terrorism and sea piracy in Southeast Asian waters.

In their last meeting in July, Mahathir and Duterte discussed these security threats. Even before then, the Philippines entered into a security initiative with Malaysia and Indonesia to launch joint patrols in Southeast Asian waters plagued by pirates.

Southeast Asia has become a hotspot for attacks at sea, with the Philippine terror group Abu Sayyaf being behind many of them. (READ: Where Duterte, Mahathir stand on pressing ASEAN issues)