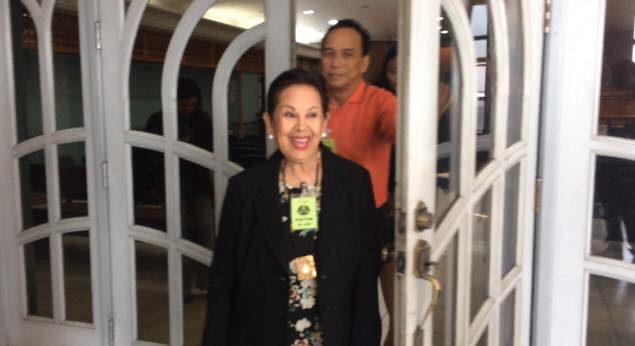 Facebook Twitter Copy URL
Copied
‘There are doubts as to the sufficiency of evidence with respect to accused Binay’s criminal culpability,’ says the anti-graft court Sandiganbayan

The Sandiganbayan 5th Division granted Binay’s Motion for Leave to File a Demurrer To Evidence in a resolution dated March 12, copies of which were seen by media only on Thursday, March 21.

In October 2018, the 5th Division ruled to exclude the key witness, former Makati councilor Ernesto Aspillaga, from the sets of evidence.

“Since Aspillaga’s testimony as state witness was denied admission, there are doubts as to the sufficiency of evidence with respect to accused Binay’s criminal culpability,” said the 5th Division in a resolution signed by Associate Justices Rafael Lagos, Maria Theresa Mendoza-Arcega, and Maryann Corpus-Mañalac.

The wording of this resolution is much stronger in Binay’s favor than the same leave given by the same division to Jinggoy Estrada and Janet Lim-Napoles in their pork barrel scam plunder cases.

In the Estrada and Napoles cases, the 5th Division merely said it was allowing the defendants to file their demurrers.

A demurrer is a pleading you file to tell the court that you do not need to present your own evidence, as the weakness of the prosecution’s evidence is enough for an acquittal. It is a pleading so serious it ideally needs the leave or permission of the court to file.

If the leave is denied and the defendant still chooses to file a demurrer, he or she will be waiving their right to present their own evidence. That’s why filing a demurrer without permission is considered risky.

Aspillaga, the supposed witness, pre-selected a contractor for the purchase of office fixtures for Makati City Hall  in 1999. This  was allegedly overpriced by P21.54 million.

Aspillaga’s proof was a supposed handwritten note from Binay where she scribbled “Office Gallery” as the chosen supplier, referring to Office Gallery International. This violates bidding and procurement rules.

The handwritten note, however, no longer exists.

The Sandiganbayan excluded his testimony because the court said it could not admit it without corroborative proof.

Binay has scored previous victories in her corruption cases.

The Court of Appeals also recently handed the Binay family another legal victory as it upheld its decision clearing former mayor Junjun Binay of administrative charges in connection with the alleged overpriced Makati City Hall Parking Building. Junjun is running for Makati mayor this May. – Rappler.com