Arroyo: ‘World should look at China’s rise as an opportunity, not a threat’ 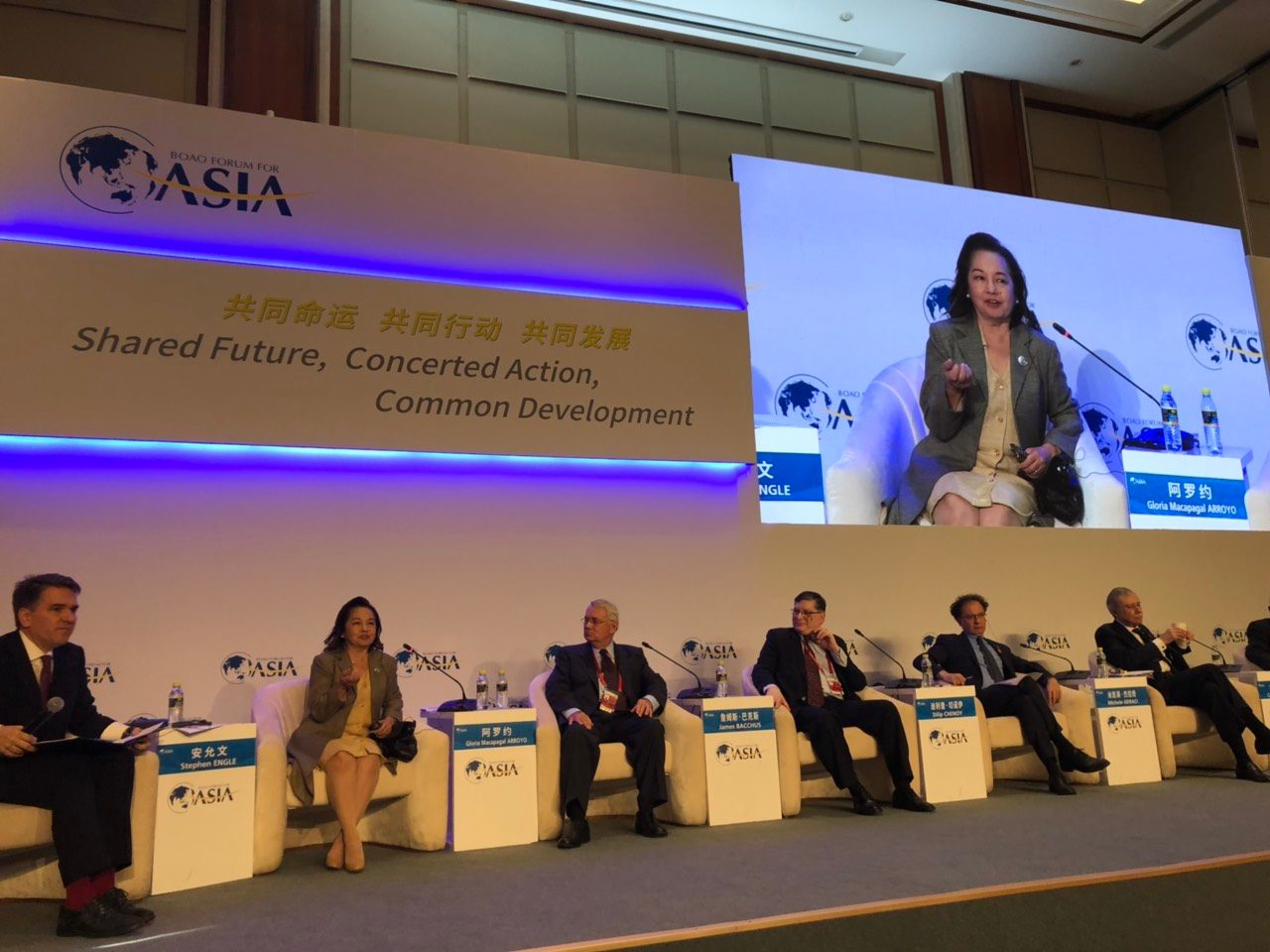 Facebook Twitter Copy URL
Copied
(UPDATED) 'China’s effort in opening up has really been a boost for the economies of the world,' says Speaker Gloria Macapagal Arroyo, whose presidency was marked by closer ties to China

MANILA, Philippines (UPDATED) – Speaker Gloria Macapagal Arroyo said on Friday, March 29, that the world should not be threatened by the rapid rise of of China’s power.

On the sidelines of the Boao Forum for Asia (BFA) Annual Conference in Hainan, China, the former Philippine president  said the international community should consider the Asian economic giant as a strategic partner of developing countries like the Philippines.

“The Philippines actually has been investing in China for quite some time now because we have a very big Filipino-Chinese community, so I’m sure they can invest further in China. At the same time, China is also now investing more and more in the Philippines. So this must be a win-win solution for the developing world,” Arroyo told reporters on Friday.

“So what I can say is that China’s effort in opening up has really been a boost for the economies of the world, especially the developing economies. The world should look at China’s rise as an opportunity rather than a threat,” she added.

The Pampanga 2nd District congresswoman is a member of the board of directors of the BFA, a non-profit organization based in Hainan that gathers leaders from government, business, and the academia in Asia and other countries to discuss the pressing issues in the region.

On Sunday, March 31, Arroyo’s office said she joined a meeting with Chinese Premier Li Keqiang along with other Boao Forum officers.

Arroyo said: “China has given us the lesson that there is just not one path for development because prior to China’s experience, it was thought that the only way to development is the Western style model of Jeffersonian democracy and coupled with a free market.”

“But China has shown the world that you can have your own model of development using your own historical experience, especially China in the last 40 years,” she said. “China is on the verge of becoming the largest economy in the world.”

Pivoting towards China is an international policy decision shared by Arroyo and current Philippine President Duterte, who are known political allies. (READ: Arroyo: Philippines can be ‘friends’ with both China, U.S.)

Arroyo’s close ties to China dates back to her 9-year presidency, when she frequently visited the foreign country. She considers Chinese President Xi Jinping a key political ally, and heaped praises for China when Xi’s visited the Philippines in November 2018.

Arroyo also previously said China should consider itself a “Big Uncle” to smaller countries in the Association of Southeast Asian Nations.

Compared to her predecessor Benigno Aquino III, Arroyo was “considerably more receptive” to Beijing’s commercial incentives and was “apparently willing to compromise” the country’s claims, according to an International Crisis Group report. (READ: Why China prefers Arroyo over Aquino)

It was also during Arroyo’s term when the Philippines entered into a Joint Marine Seismic Undertaking (JMSU) with China and Vietnam, where the 3 countries agreed to conduct joint exploration in the West Philippine Sea covering both disputed and undisputed territories starting 2005.

Critics of the JMSU alleged that Arroyo had committed “treason” by allowing it. While the JMSU expired in 2008, a petition was filed before the Supreme Court that year, seeking to declare the JMSU void to prevent a similar undertaking from being made. The petition is still pending before the High Court.  – Rappler.com