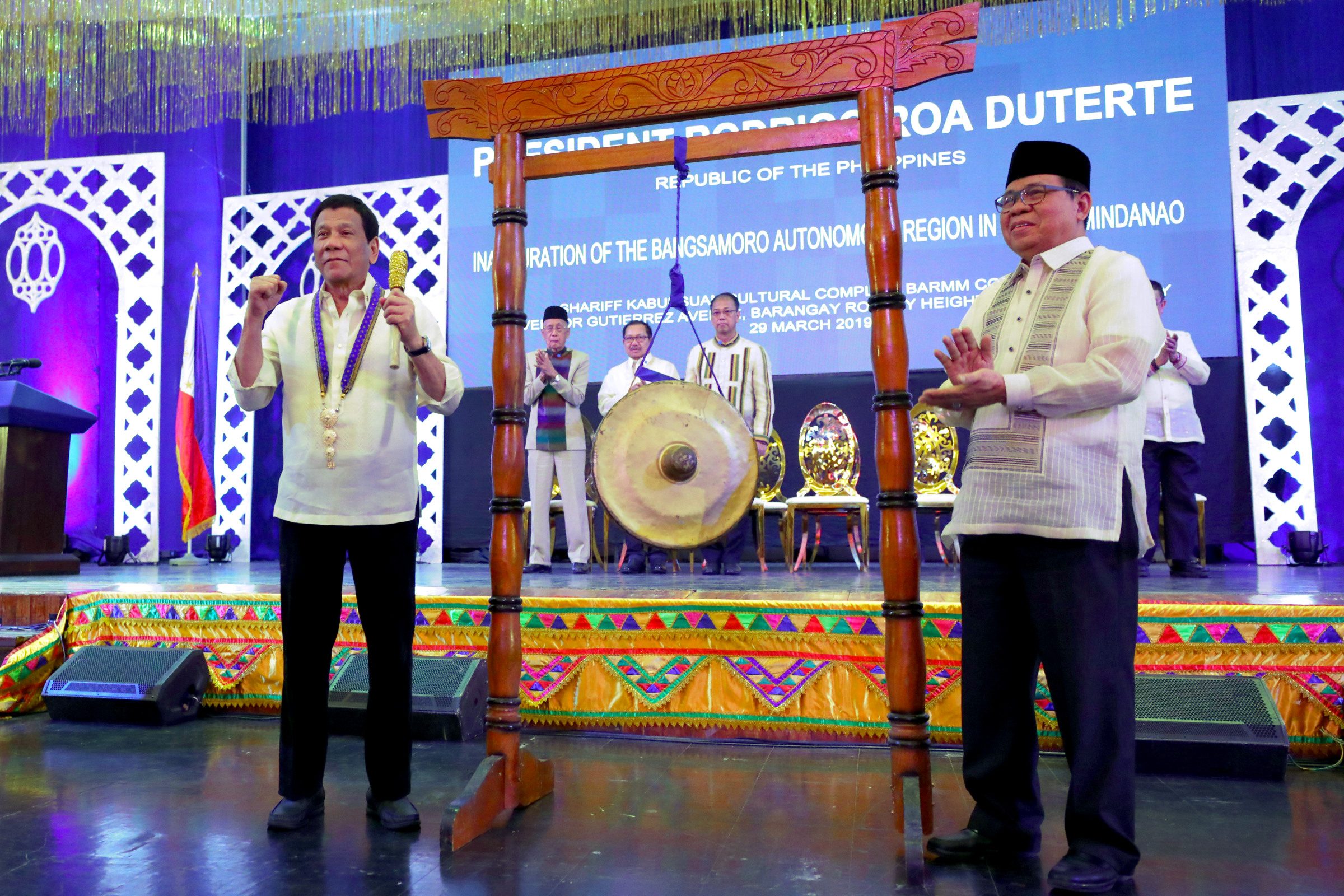 MANILA, Philippines – The newly-created Bangsamoro Autonomous Region in Muslim Mindanao (BARMM) was formally inaugurated on Friday, March 29, with its first set of ministers taking their oaths.

The inauguration took place at the Shariff Kabunsuan Cultural Complex in Cotabato City in the presence of President Rodrigo Duterte.

The ceremony began at around 6 pm, when Duterte arrived. He had been scheduled to arrive 2 hours earlier, at 4 pm.

Many members of the Bangsamoro Transition Authority (BTA), the region’s interim government, had fought for decades to see a genuinely autonomous region rise in Mindanao.

“There were ups and down in the past 22 years but here we are today together with the President of our country inaugurating the product of what we have been working on long before the peace talks started 22 years ago,” said Interim Chief Minister Murad Ebrahim in his speech.

The banging of the gong at the start of ceremony marked “a new beginning for the Bangsamoro,” he said.

President Duterte was similarly elated at inaugurating the BARMM.

Outside of his prepared remarks, he had to convey his “extreme happiness.” (READ: Halfway into term, Duterte delivers on Bangsamoro promise)

“May I just express in front of you my extreme happiness. It gives me the high that we were able to realize at least a part, maybe not all, a part of what the entire country would have wished for the Moro people of Mindanao,” he said to cheers.

“I cannot express my sense of gratitude to you for understanding, for giving us the time to craft the law to make it legal and promise a new dawn for the Moro, the Bangsamoro area,” continued the President.

But he turned sober, reminding BTA members of their huge responsibility. He called on them to promote transparency, accountability, good governance, and “inclusive political empowerment.”

“To my dear Bangsamoro sisters and brothers in the Bangsamoro Transition Authority, the power to chart the course of your region’s future is now in your hands. I trust that you wield this power with utmost care,” he said.

Chief Minister Murad led BTA members in taking an “oath of moral governance” in front of the Koran.

Together, they swore before Allah to reject corruption and graft.

“I shall protect the legitimate rights and interests of all people in the area, strongly fight the proliferation and use of illegal drugs and other evils of society and endeavor to promote and sustain peace and security at all times in the BARMM territory and in the entire country, so help me Allah,” said Murad.

Clarifying the BTA’s role alongside those of the national government will be among the challenges the new Bangsamoro government will face, said Ben Bacani of the Institute of Autonomy and Governance.

This includes consultations with the national government when crafting its administrative, legislative, and electoral code, among others, to make sure it remains consistent with what is lawful.

Bacani said while the national government and BTA coordinate with other another when setting up agencies in the new region “hand holding [must be] towards the right direction.”

“If the hand-holding is still patronage system, autonomy will not grow and the vision of the BOL will not be fulfilled,” he said.

Along with consultations with the national government, the BTA, Bacani said, needs to ensure adequate participation of ethnic groups when drafting plans for the new region. He added this would give residents a sense of ownership to the Bangsamoro region. (READ: Powerbrokers in the Bangsamoro region)

“The challenge is to bring in different ethnic groups not only to support but to participate in this process of transition. If not, the BTA will be ‘isolated,’ and may lose support…. That’s a very strong identity issue for the Bangsamoro,” he said.

The BTA will also need to make clear its relationship with local government units which are often run by powerful clans, Bacani said. He recalled the experience of ARMM, which planned for a regional local government but was not implemented fully.

He called on the BTA to keep the Bangsamoro people regularly updated on its programs and plans. Transparency and accountability will help foster trust between the BTA and its constituents, many of whom feel ignored by the national government. – With reports from Sofia Tomacruz/Rappler.com