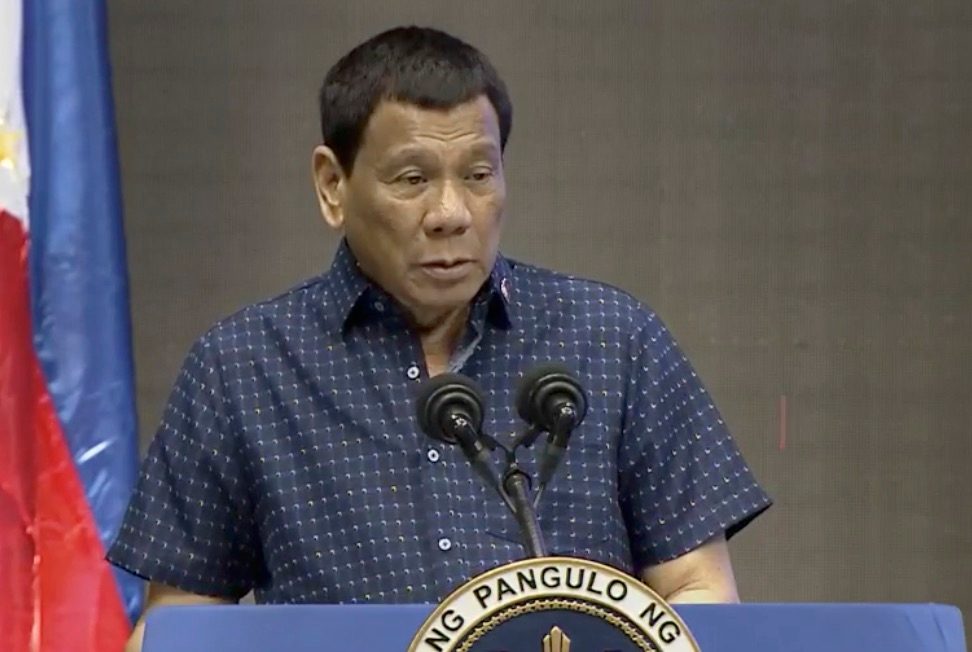 (The yellows have made another black propaganda, saying Pulong and I are drug lords. I’ve been slaughtering you already you sons of bitches, why would I be involved in drugs? Black propaganda.)

Duterte hinted that his staunch critic, opposition Senator Antonio Trillanes IV, was behind the black propaganda against them. In return, the President called the senator “gay.”

(You know who’s behind it? A man who appears all macho but but is [gay]. The man talks and acts as if he’s brave, acts as if he’s someone…. Who among Duterte’s critics talk tough but are [gay]?)

“Yung nanay niya dealer dun sa PMA…. Kaya ngayon naintindihan ko na bakit inaarbor siya ng tatay niya pag mahirap na y’ung trabaho (His mother is a dealer in the PMA…. Now I understand why he was assisted by his father when the work got difficult then),” claimed  Duterte, who had accused Trillanes’ ailing mother of anomalous deals in the military.

The video, titled “Totoong Narco List,” features “Bikoy,” an anonymous person who claimed to have worked for a drug syndicate operating in Southern Luzon and the Visayas. The man says he was involved in recording the syndicate’s transactions.

A document called “tara” is shown in the video. It was supposedly an internal document that lists down how much money is given to the “principals” or leaders of the drug syndicate.

A page shows 4 batches of P25 million or P20 million were allotted to a principal going by the code names “Polo Delta G01” and “Alpha Tierra-0029.”

Another document shows these bank account numbers are under the names “Carpio Reyes Waldo” and “Carpio Waldo.” The video alleges that the person referred was Waldo Carpio, brother of Manases Carpio. Manases is the husband of Davao City Mayor Sara Duterte, who is Paolo’s sister.

President Duterte stood as principal sponsor at Waldo’s wedding. Duterte also appointed Waldo as agriculture assistant secretary and then promoted him to undersecretary.

A supposed 2018 account summary of one of the accounts showed P170 million and P210 million were withdrawn in May and December, respectively. The video then showed another document, this time supposedly from an “international bank.” The video claimed the same amounts were deposited to an account under the name “Duterte Paolo” on the same dates those amounts were withdrawn from Carpio’s alleged account.

Towards the end of the video, “Bikoy” is again shown. He claimed Paolo had a dragon tattoo on his back and that under the eye of this dragon is the code “Alpha Tierra 0029,” the same code name in the supposed “tara.”

Trillanes had made the same dragon tattoo allegation during a Senate hearing on the P6.4-billion smuggling of 604 kilos of methamphetamine or shabu into the Philippines last year.

Paolo, for his part, said the claims in the video were an “invention” and blamed a certain “J.S.” for it.

He said J.S. was mad at Waldo because the latter “had blocked all your sugar and rice smuggling.” Waldo was allegedly instrumental in the seizure of 100 sacks of Thailand rice at the Manila International Container Terminal in June last year.

Paolo said “J.S.” was also angry at him because he had ignored him on a flight once “because you are boastful.”

The viral video was not the first time Paolo has been linked to illegal drugs. Back in 2017, a customs broker claimed corrupt customs officials were name-dropping Paolo.

Self-confessed hitman and former Davao City policeman Arthur Lascañas also linked the President’s son to a shabu shipment from China. In May 2018, Paolo Duterte and Manases Carpio were cleared of involvement in the P6.4-billion shabu smuggling controversy by an Ombudsman panel. – Rappler.com