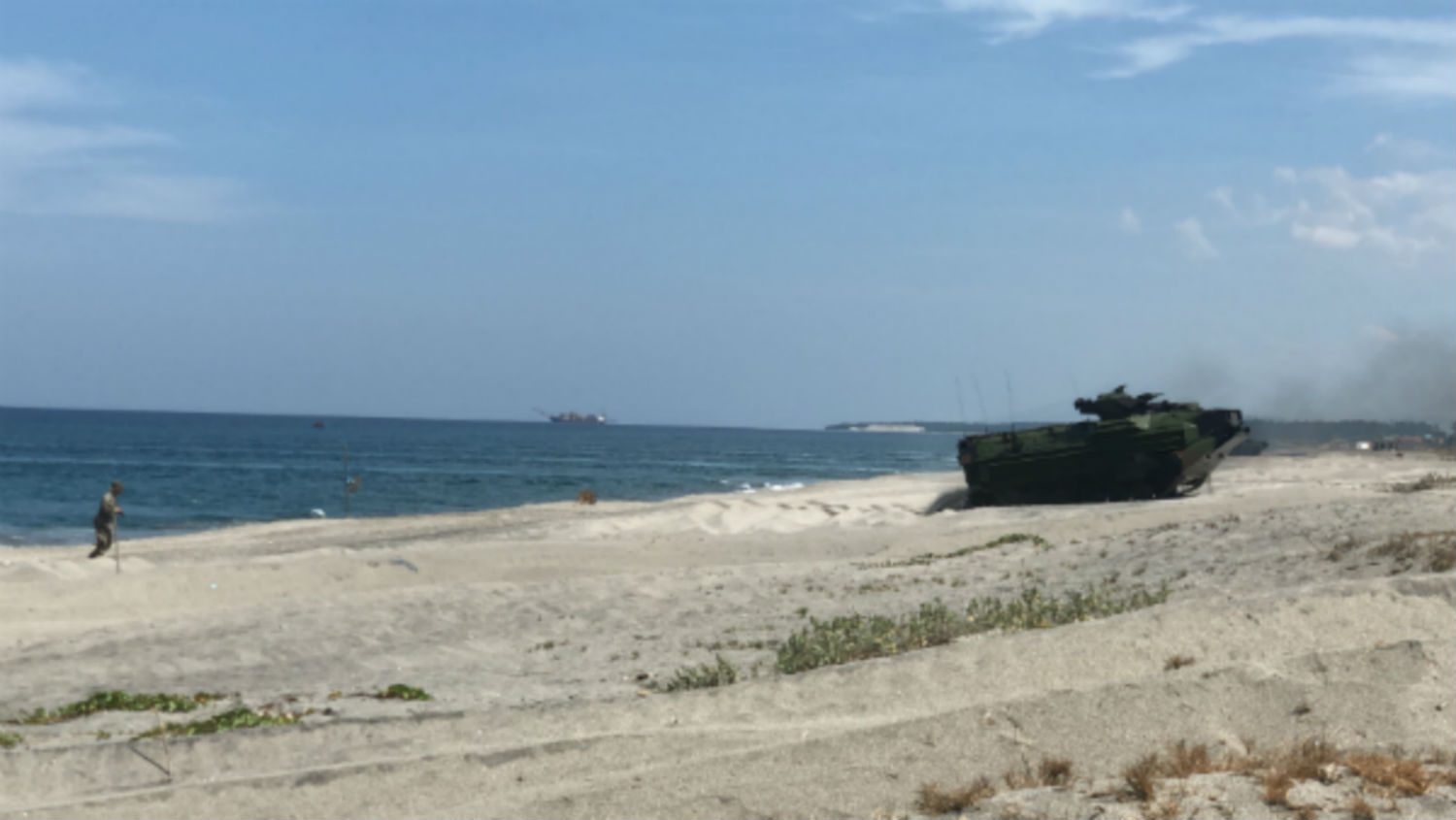 ZAMBALES, Philippines – In a naval base facing the West Philippine Sea, Philippine and US troops on Thursday, April 11, descended full force in a mission to take control of the shores from a common enemy.

Aircraft flew overhead, ordnance were dropped on the land below, and over 200 Marine corps from the countries’ combined forces arrived in amphibious assault vehicles to lay claim on the North Beach of the Naval Education Training Center in San Antonio, Zambales.

The mission was elaborate. It was also scripted.

The amphibious exercises on Thursday were the last in Balikatan 2019, a nearly two-week long event where troops from the Philippines, United States, and Australia undergo training that would better prepare them for real battle.

The annual Balikatan 2019, now in its 35th iteration, also aims to strengthen interoperability and reinforce ties between the Philippines and its oldest treaty ally, the US.

What took place: True to its name, the amphibious landing exercise saw Philippine and US marine corps carry out the mission shoulder to shoulder or “balikatan” in Filipino.

The drills, composed of several waves, started at about 9:15 am, with the Philippines’ OV 10 and US’ MV-22 Ospreys aircraft performing simulated close air support. Dropping ordnance, the aircraft set the scene for US and Filipino marines to set foot on shore. 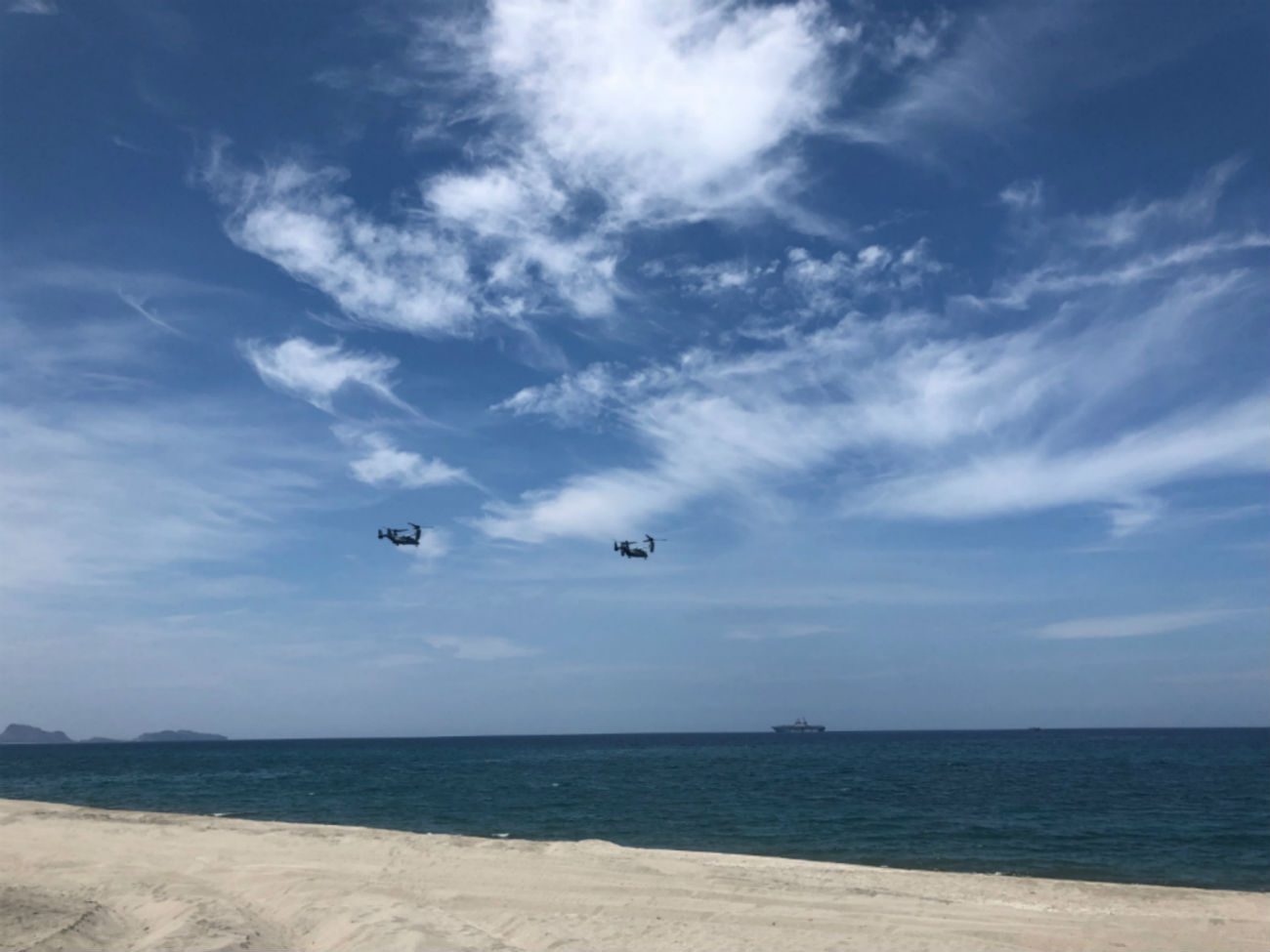 About 160 US marines then made their way towards land on 7 amphibious assault vehicles (AAVs). The vehicles departed from the US Navy’s USS Wasp, sailed their way to shore, and continued to run on dry land.

From there, some 50 Filipino troops followed on 4 AAVs, which departed from the Philippine Navy’s BRP Tarlac. After this, they carried out combat operations as the main effort to clear out the enemy.

Once this was done, the forces declared victory.

What are the exercises for? One of the biggest takeaway for both countries’ armed forces was preparation for possible future conflict.

The exercises focused on improving interoperability between US and Philippine troopers so both forces grow familiar with the way each one moves and communicates on the battle field.

For the Philippines, the use of AAVs in the exercise also served as training for when its own armed forces receive them for the first time. Four AAVs are expected to arrive from South Korea later this year.

“AAVs [are] used to project combat power from the sea and shore…. The tactics, techniques, and procedures that they [Filipino marine corps] can get from this exercise from the US counterpart will be very beneficial for us,” said Balikatan Public Affairs Director Lieutenant Commander Liezl Vidallon.

As for the US, the highlight was the F-35B Lightning II Joint Strike Force (JSF) – the world’s most advanced multi-role stealth aircraft – aboard the USS Wasp. It was the first time the aircraft was featured in the Balikatan exercises.

Though the stealth jets were not deployed and remained onboard the USS Wasp, US Balikatan Exercise Media Officer 2nd Lieutenant Tori Sharpe said the F-35s were brought to the joint exercises for the first time to understand how to “best employ their capabilities” in the Indo-Pacific region. ([ANALYSIS] Balikatan: U.S. shifts gears from counterterrorism to great power competition)

Despite rising tensions brought about by China’s expansive claims in the West Philippines Sea, both the US and Philippines repeated the exercises were not aimed at anyone. Its main purpose, they said, was to strengthen cooperation between the two forces. – Rappler.com