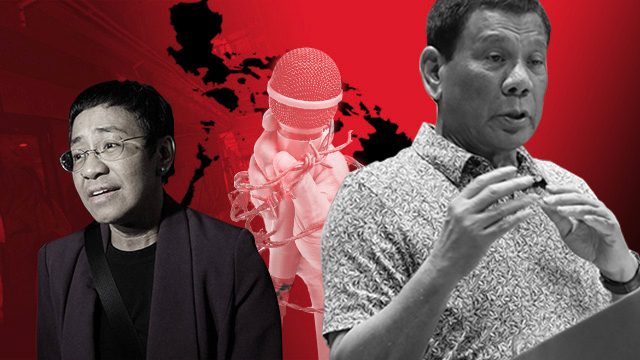 Facebook Twitter Copy URL
Copied
Reporters Without Borders says harassment against Rappler and Maria Ressa is the 'most emblematic case' of the threats against Filipino journalists. Turkey is also listed as among the world's worst countries for press freedom.

From 133rd place last year, the Philippines is now ranked 134th out of 180 countries in 2019, according to the index released by media watchdog Reporters Without Borders (RSF) on Thursday, April 18. The country scored 43.91 points.

RSF attributed the Philippines’ lower ranking to the Duterte government’s continued threats against journalists, which are “accompanied by coordinated cyber-attacks.”

According to the media watchdog, the “most emblematic case” is the attacks against social news network Rappler, Rappler Holdings Corporation, its CEO Maria Ressa, the members of the board of directors of Rappler Inc, and one of its reporters.

“The most emblematic case is undoubtedly that of the news website Rappler and its editor, Maria Ressa, who is the target of both recurring online harassment campaigns and a series of prosecutions orchestrated by different government agencies,” said RSF in a statement.

Ressa was arrested on February 13 on a cyber libel charge. In March, she was arrested for alleged violation of the anti-dummy law. She posted bail in both cases. (READ: LIST: Cases vs Maria Ressa, Rappler directors, staff since 2018)

As of April 3, 2019, there are a total of 11 probes, complaints, and cases filed against Rappler, its executives, and former researcher. The mother case revoking Rappler’s license to operate has been remanded to the Securities and Exchange Commission for review.

“If the political debate slides surreptitiously or openly towards a civil war-style atmosphere, in which journalists are treated as scapegoats, then democracy is in great danger,” said RSF secretary-general Christophe Deloire said.

“Halting this fear transmission mechanism is a matter of the utmost urgency for anyone who values the freedoms acquired in the course of history,” he added.

Amid the ongoing attacks against Rappler, Ressa has been recognized as a beacon of press freedom around the world, and has a received a number of prestigious awards.

Ressa was named among Time magazine’s most influential people of 2019. Time recognized her as an “icon” for her work at Rappler, citing Ressa’s commitment to “exposing corruption, documenting abuse and combatting misinformation.”

It comes after the magazine also named Ressa as “Time Person of the Year” in 2018, alongside several other journalists under siege in their countries.

RSF warned hatred of journalists whipped up by populist and authoritarian leaders is degenerating into violence across the world, with the number of countries where journalists can work safely plummeting.

Political leaders’ hostility toward the media “has incited increasingly frequent acts of violence that have fuelled an unprecedented level of fear and danger for journalists,” the report added.

The Paris-based watchdog also fears that the rising tide of strongman leaders “no longer seems to know any limits,” citing the gruesome murder of Saudi columnist Jamal Khashoggi in Istanbul.

Six reporters were murdered there last year, and RSF said critics of the Hindu nationalism espoused by its ruling party “are branded as ‘anti-Indian’ in online harassment campaigns.”

Turkey, the world’s biggest jailer of journalists, was among the worst countries.

RSF said “repression continued to tighten on the few critical outlets that remain,” with its biggest media group taken over by a pro-government conglomerate.

It has also the dubious honor of being the only country to prosecute a journalist for reporting the Panama Papers offshore investment leaks.

Russia, which the report branded as another “pioneer of repression,” continued to slide down the table to 149th place. – with reports from Agence France-Presse/Rappler.com