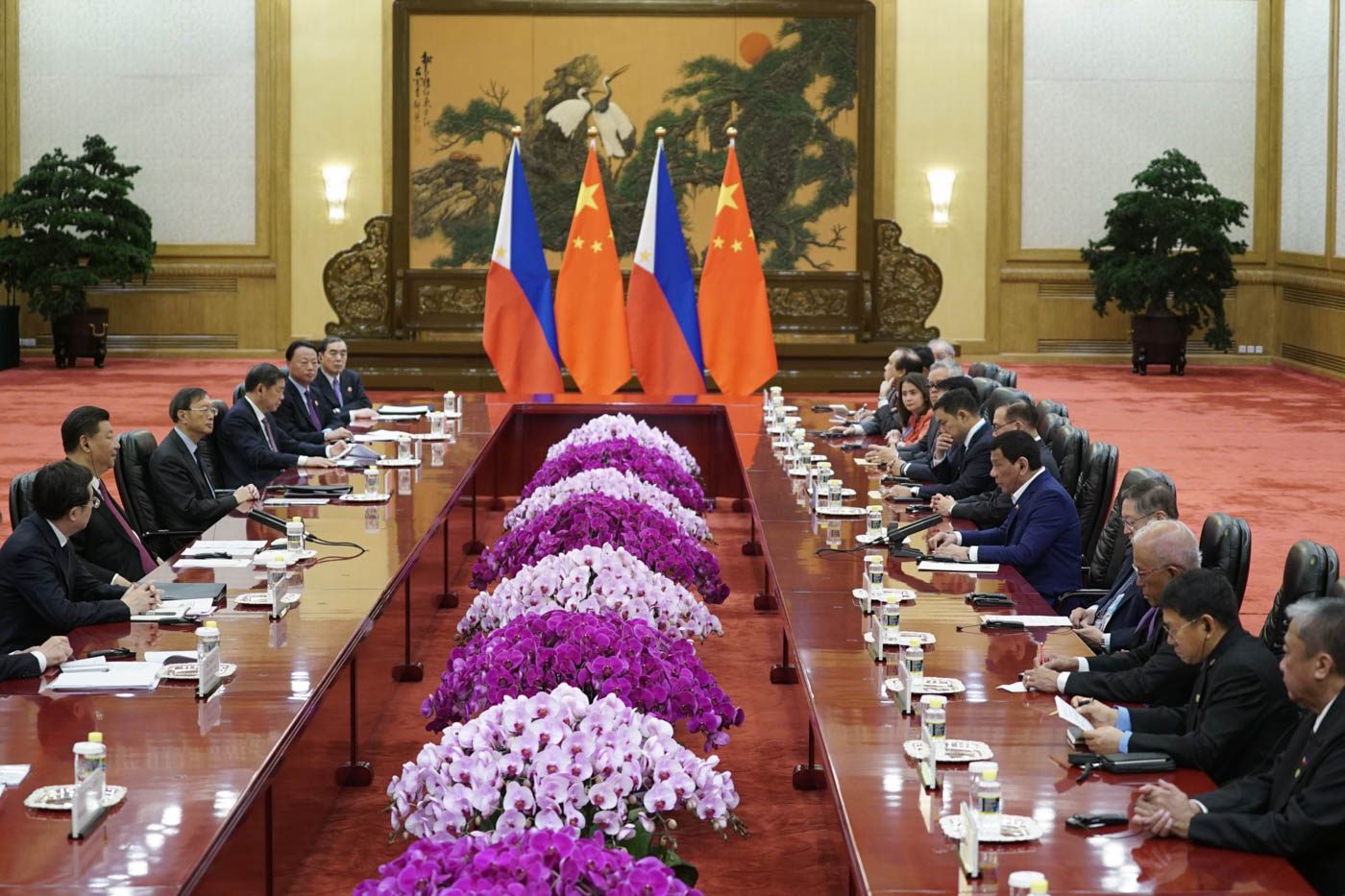 “Both agree that the situation can be managed by the mechanism of bilateral negotiations,” said Presidential Spokesperson Salvador Panelo on Thursday, April 25.

It was Duterte who raised “the issue of the West Philippine Sea, particularly the situation in Pag-asa Island,” said Panelo.

But Xi made no promise to order Chinese ships to increase their distance from Pag-asa Island, Panelo said on Monday, April 29, during a Palace news briefing.

“Wala siyang binanggit na ganoon (He made no mention of that),” said the Duterte spokesman.

Xi even repeated his country’s stance that the 2016 Hague ruling won by the Philippines against Beijing’s claim to the West Philippine Sea is not a valid ruling.

The meeting between the two leaders took place in the Great Hall of the People in Beijing, a day before the Belt and Road Forum that Xi is hosting for around 35 heads of state.

According to Panelo, Xi expounded on the “importance of good neighborliness” and “proper handling” of issues in the West Philippine Sea.

Duterte, meanwhile, highlighted that the Philippines and China are allies who “strengthen – and do not destroy – each other,” said Panelo.

Xi made special mention of the Memorandum of Understanding on Cooperation in Oil and Gas Development, signed between the two countries during his state visit in Manila in November 2018.

He said it was an “example where both the Philippines and China suspended their differences for a joint exploration that would mutually benefit both countries and their peoples,” relayed Panelo.

Duterte too, in his remarks at the meeting, mentioned the need to implement agreements signed during Xi’s visit so that Filipinos can benefit from them “sooner.” (READ: ‘A friend in need’: China’s promises to PH)

Duterte’s China visit, the 4th in his presidency, takes place under the shadow of the Philippine military’s report that hundreds of Chinese vessels have been spotted near Pag-asa Island, home to around a hundred Filipino civilians and soldiers.

Duterte vowed he would not let China occupy the island, one of 9 Philippine-held islands in the Spratlys, an archipelagic cluster in the West Philippine Sea. (READ: Philippines considering making Pag-asa Island protected area)

China, however, is adamant in its belief that Pag-asa Island is part of its domain. (READ: China deploys militia as Philippines builds on Pag-asa Island)

The two countries have engaged in bilateral talks since May 2017, a fruit of Duterte’s state visit to China in 2016. – Rappler.com