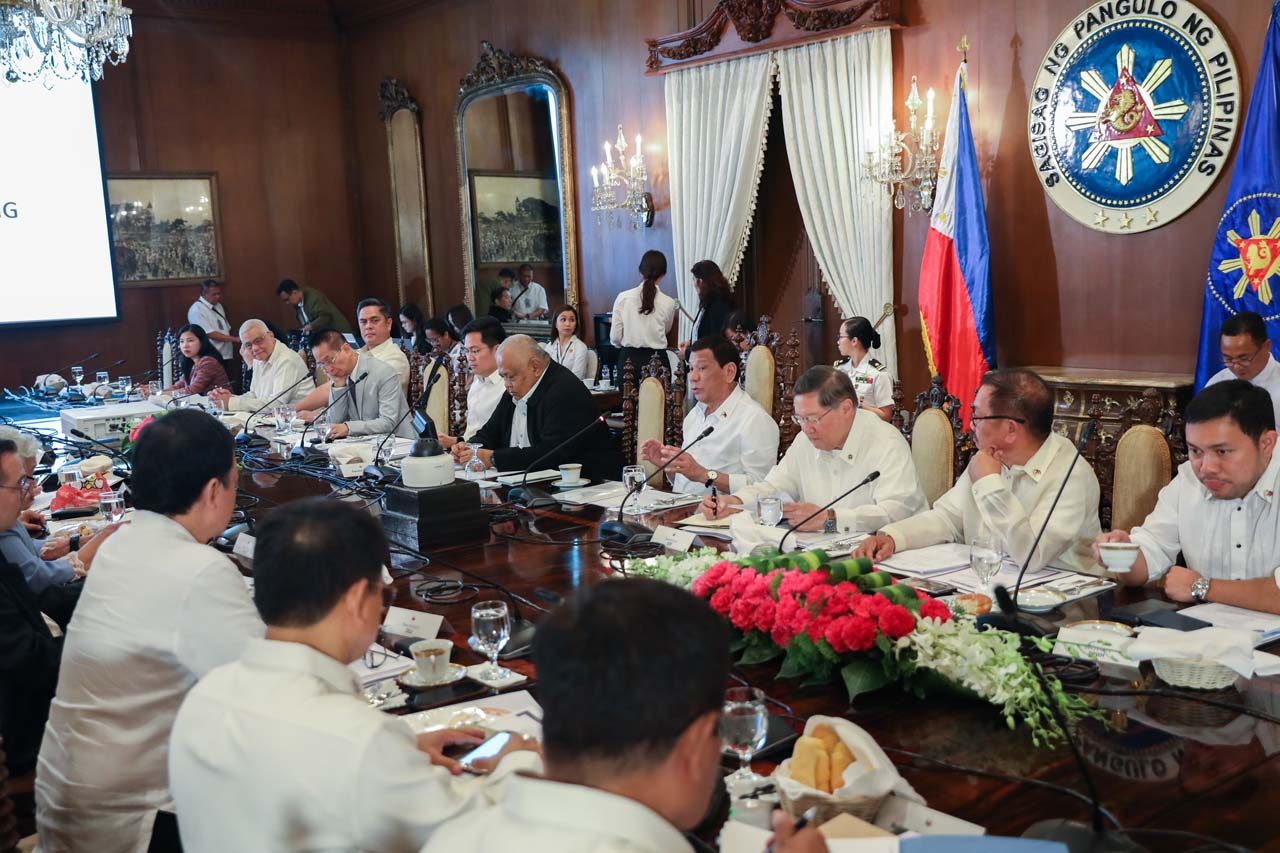 MANILA, Philippines (UPDATED) – The administration of President Rodrigo Duterte scored a record-high +72 net satisfaction rating in the first quarter of the year, according to the results of a Social Weather Stations (SWS) survey released on Friday, May 3.

The First Quarter 2019 Social Weather Survey held from March 28 to 31 found 81% of adult Filipinos satisfied, 10% neither satisfied nor dissatisfied, and 9% dissatisfied with the general performance of the national government, for an “excellent” net rating of +72, SWS said in a statement.

This is 6 points higher than the government’s net rating in December 2018, which SWS attributed to increased ratings in all geographic areas.

Among geographic areas, the Duterte government obtained the biggest jump in its net satisfaction rating in the Visayas, where it scored an  “excellent” +74 in March from a “good” +63 in December 2018.

The respondents gave the Duterte government the following scores on specific issues, ranked from highest to lowest:

While the government scored the lowest in its fight against inflation, the March net rating is 8 points higher than in December 2018. Inflation started easing in February, and continued in March.

There was also improved public satisfaction in its performance on ensuring that no family will ever be hungry, up by 9 points  to +37 in March from +28 in December 2018.

The government’s net satisfaction rating in work on reconciling with communist rebels improved by 6 points – which the SWS noted was a “record high” – even after President Rodrigo Duterte dissolved the government peace panel negotiating with the National Democratic Front in March, the arrest of an NDF consultant, and killings of Negros Oriental farmers suspected to be communist rebels, in police operations.

The President officially terminated negotiations with communist rebels through Proclamation No. 360 in November 2017.

Net satisfaction in government work on reconstructing Marawi  fell by 2 points, as the city that had been completely destroyed during months of fighting between local terrorists and government troops in 2017, remained in ruins.

Amid continuing questions about the Duterte government’s foreign policy in relation to China, its net satisfaction rating on foreign relations improved by 3 points from +38 to +41, while its rating on defending Philippine sovereignty in the West Philippine Sea remained unchanged.

During the survey period, it was reported that Chinese miliitia vessels were seen near Pag-Asa Island. It was also during this time when Supreme Court Associate Justice Antonio Carpio sounded the alarm on the Duterte government’s loan agreements with China.

The survey was held before it was reported that a Chinese dredging vessel was discovered off the coast of Batangas, and that Chinese fishermen illegally harvested endangered giant clams in Panatag Shoal (Scarborough Shoal) off the coast of Zambales in the West Philippine Sea. 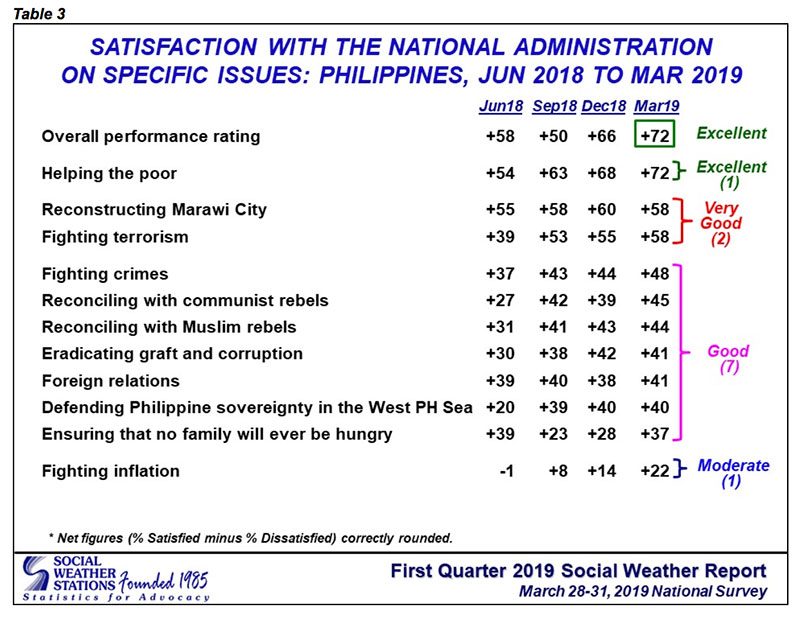 Among socioeconomic classes, satisfaction in the government’s performance was highest among the well-off class ABC at +73, 1 point higher than in March; followed by class D at +72, a 7-point increase from the last survey period; and +68 among the poorest class E – down by 2 points, even if the government scored the highest in helping this group.

In between the December and March surveys, the historic Bangsamoro Organic Law was ratified and the Bangsamoro Transition Authority formed. The creation of a genuinely autonomous Bangsamoro region was among Duterte’s major promises to Mindanaoans.

SWS said that the area estimates were weighted by the Philippine Statistics Authority medium-population projections for 2019 to obtain the national estimates.

“The quarterly Social Weather Survey items on public satisfaction with the general performance of the National Administration, and its performance on specific subjects, are non-commissioned. These items are included on SWS’s own initiative and released as a public service,” SWS said. – Rappler.com