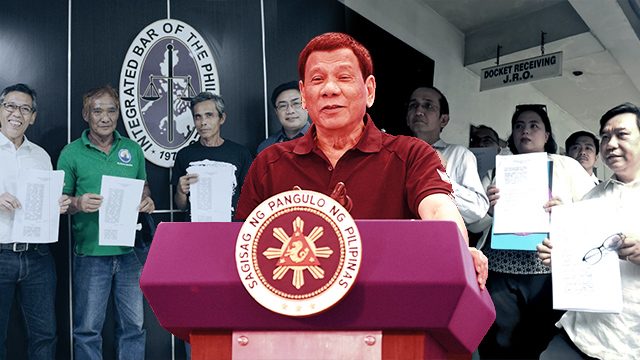 Facebook Twitter Copy URL
Copied
In the case of the writ of amparo for human rights lawyers, it's President Rodrigo Duterte himself who must submit a response to the Supreme Court

MANILA, Philippines – President Rodrigo Duterte’s government must explain to the Supreme Court (SC) the government’s harassment of human rights lawyers, and the supposed failure to enforce environmental laws in 3 areas in the West Philippine Sea.

This follows the SC’s issuance of writs of amparo and kalikasan in two separate petitions.

In the writ of amparo for human rights group National Union of Peoples’ Lawyers (NUPL), it’s Duterte himself who must submit a response to the High Court. The NUPL has accused the military of harassing its members by linking them to communist rebels, and Malacañang by tagging the lawyers’ group in a publicized ouster plot matrix.

“The Court also ordered respondents President Rodrigo Duterte, who was impleaded in his capacity as the Commander-in-Chief of the Armed Forces of the Philippines, National Security Adviser (Ret.) Gen. Hermogenes C. Esperon, Jr., et al. to make a verified return of the writ of amparo and habeas data on or before May 8, 2019, and to comment on NUPL, et al.’s petition before the said date,” the SC said.

On top of that, the SC also issued a writ of habeas data, which now compels both Duterte and his military top brass to turn over to the Court all the information they have on the human rights lawyers.

This could put to test the veracity of the “ouster plot matrix,” which, just recently, Presidential Spokesperson Salvador Panelo said was sent by an unknown number.

A writ of amparo is a legal remedy seeking a protection order, while a writ of habeas data asks the Court to compel the respondent to delete or destroy damaging information.

While there is no protection order for NUPL yet, the military will be forced to come to court in a Court of Appeals hearing scheduled on May 14.

The writ does not entail anything concrete at this point, but NUPL president Edre Olalia said the SC issuance is significant because “its subtext is unequivocal.”

In the writ of kalikasan issued to fishermen of Palawan and Zambales, the SC also ordered the respondents – members of the Duterte Cabinet – to make a return of the writ, or to explain.

A writ of kalikasan is a legal remedy that upholds a citizen’s right to a healthy environment. The fishermen, aided by human rights lawyer Chel Diokno and the Integrated Bar of the Philippines, want to compel the Duterte administration to protect the maritime environment in Panatag Shoal, Ayungin Shoal, and Panganiban Reef.

The petition notes China’s construction and other aggressive activities that have “caused severe, irreparable harm to the coral reef ecosystem.”

“While Secretary Salvador Panelo claims that the government has done its duty of protecting our fisherfolk and protecting our marine life and resources in the West Philippine Sea, it is now time for the government to prove this in court by means of evidence. The time for talk is over,” said Diokno in a statement on Sunday, May 5.

Diokno added: “The issues have now been joined. The court battle has begun.” – Rappler.com