Duterte bugged by cockroach during speech

May 9, 2019 2:22 PM PHT
Agence France-Presse
Facebook Twitter Copy URL
Copied
An aide tries and fails to scrape the critter away with some papers, but Duterte brushes the cockroach aside 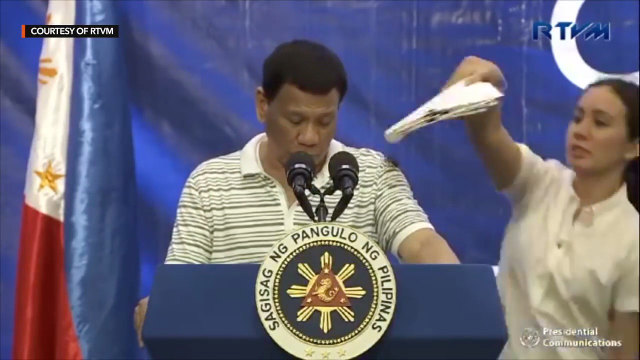 MANILA, Philippines – Philippine President Rodrigo Duterte’s unpredictable speeches frequently contain bombshell pronouncements, but the surprise this time came in the form of a cockroach ambling along the leader’s shoulder.

The bug popped up on Duterte as he was extolling the virtues of the candidates he has endorsed in next week’s midterm polls at a campaign rally late Wednesday, May 8.

An aide tried and failed to scrape the critter away with some papers, but Duterte brushed it aside as the government broadcast cut to a smiling but bemused audience in the central city of Bohol.

Duterte, who was nearing the end of his roughly 90-minute address, joked that the insect belongs to the opposition party.

The leader’s critics quickly took to Twitter to mock his close encounter with the roach, which is more frequently seen scurrying over refuse.

“The cockroach must have realized that duterte is the trashiest trash it has ever seen,” wrote @andy_crush.

“And I never thought I would say this but GOOD JOB EXPOSING THAT TRASH, DEAR COCKROACH,” @keeyaaraaa posted.

Duterte is on the campaign trail to rally support for his candidates in next week’s midterm polls, in which some 18,000 seats ranging from local councils to the upper house Senate are up for grabs. – Rappler.com