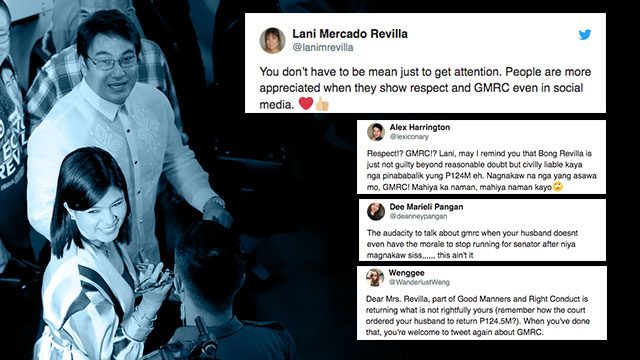 MANILA, Philippines – Filipinos online fired back at Lani Mercado Revilla after she invoked “GMRC” or Good Manners and Right Conduct in a tweet, saying people commenting on issues involving her husband didn’t need to be mean.

She is married to returning senator Ramon “Bong” Revilla Jr, whom the Sandiganbayan acquitted of plunder over the pork barrel scam despite records of the Anti-Money Laundering Council showing that alleged kickbacks matched the amounts deposited in the bank accounts of family members always within 30 days of their release. (WATCH: How Revilla got away from the plunder charge)

The Office of the Ombudsman has appealed the anti-graft court Sandiganbayan to order Revilla to return P124 million to public coffers. He is still facing graft charges in relation to the misuse of his Priority Development Assistance Fund when he was senator. (READ: ‘How to get away with plunder’: Netizens blast Revilla’s acquittal with memes)

Lani, who is the mayor of Bacoor City in Cavite, said in her tweet that people “don’t have to be mean just to get attention.”

You don’t have to be mean just to get attention. People are more appreciated when they show respect and GMRC even in social media.

Twitter user @lexiconary questioned Lani’s request, reminding her that her husband, Bong Revilla, had been accused of pocketing millions of public funds.

Twitter user @deanneypangan squirmed at Lani’s audacity to talk about GMRC when her husband did not even “have the morale to stop from running for senator after stealing.” (READ: 3 ex-senators charged in pork barrel scam running in 2019)

The audacity to talk about gmrc when your husband doesnt even have the morale to stop running for senator after niya magnakaw siss,,,,,, this ain't it

In an interview with PEP.ph, Lani defended her husband from critics and lamented the bashing he had been getting both online and in showbiz.

When Revilla was cleared by the anti-graft court Sandiganbayan in December 2018, he was ordered to return P124 million to the Philippine treasury. Yet, he insisted he had nothing to return.

Twitter user @WanderlustWeng said that part of good manners is “returning what is not righfully yours.”

Dear Mrs. Revilla, part of Good Manners and Right Conduct is returning what is not rightfully yours (remember how the court ordered your husband to return P124.5M?). When you've done that, you're welcome to tweet again about GMRC.

Addressing Revilla’s wife, she said that once the money is returned, Lani is welcome to tweet about morals again.

While Lani asked for respect from people, netizens told her that respect is earned and not demanded.

Twitter user @abbeyygl said that the Revillas do not have the right to ask for respect when they were the first to set it aside.

Other netizens asked the Revillas to take heed of people’s clamor: “Return what you stole.”

Please ask your husband to return the money. Please, ma’am? It will be most highly appreciated! And do remind him not to do it again? GMRC

Lani Mercado, your feelings do not govern what is moral and what is just. Your right to be offended is significantly smaller than our right to be outraged. https://t.co/NkRSfpJRuw

Here are some of the tweets: