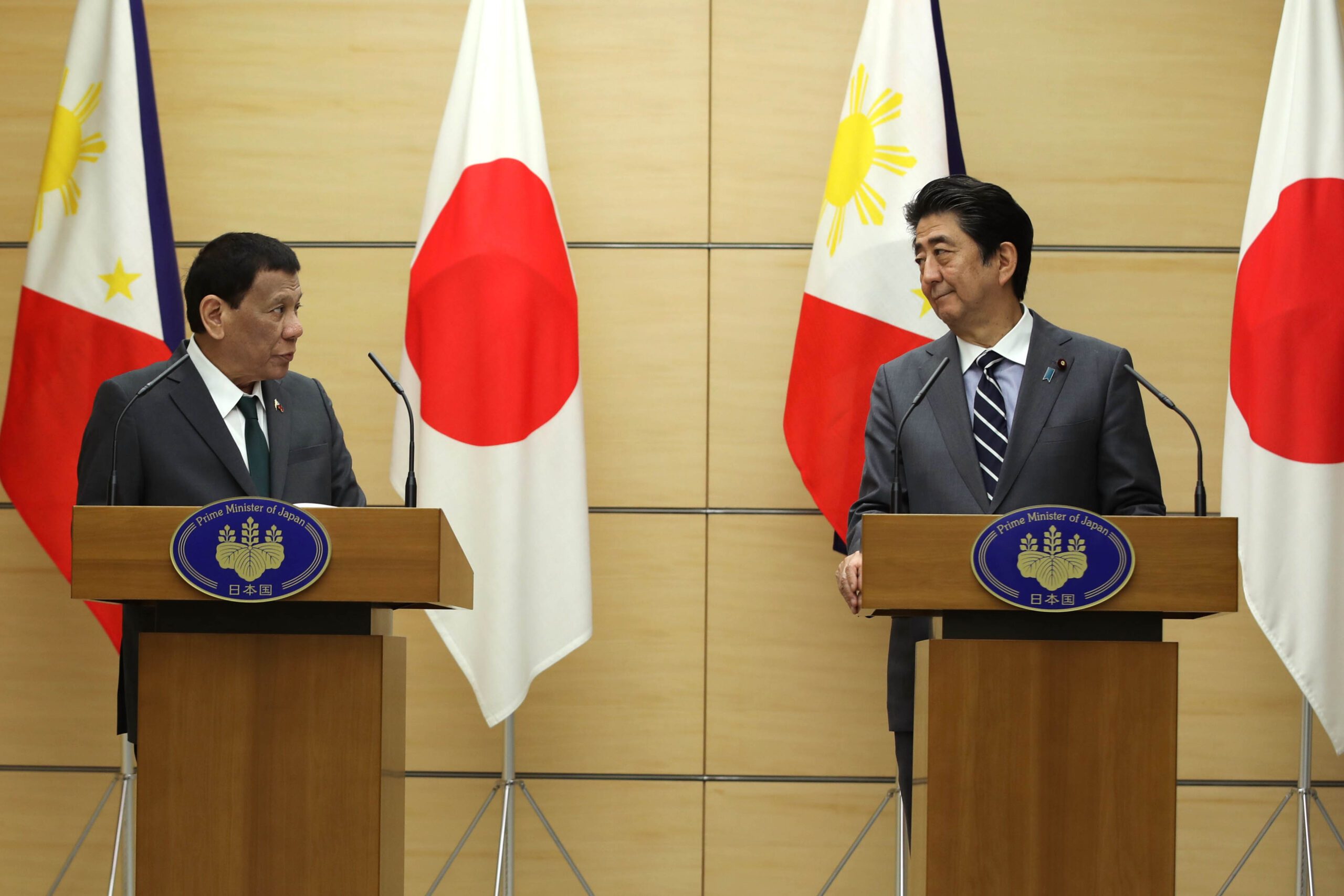 Facebook Twitter Copy URL
Copied
During their summit meeting in Tokyo, among the topics President Rodrigo Duterte and Japanese Prime Minister Shinzo Abe discussed was 'advancing the rule of law, including in the South China Sea,' a Palace statement says

MANILA, Philippines – The Philippines and Japan have agreed to further strengthen their bilateral cooperation in a range of areas, including trade and investments, defense, and maritime security, Malacañang said on Saturday, June 1.

This was among the highlights of the summit meeting between President Rodrigo Duterte and Japanese Prime Minister Shinzo Abe in Tokyo on Friday night, May 31.

“President Duterte and Prime Minister Abe agreed to enhance bilateral cooperation in infrastructure development, trade and investments, agriculture, labor, defense, maritime security and maritime domain awareness, people-to-people exchanges, and the pursuit of just and lasting peace and process in Mindanao,” read the statement on the Japan working visit of Duterte, who returned to the country early Saturday morning.

During their meeting, the two leaders “discussed modalities for greater cooperation in upgrading the Philippines’ defense capabilities, including in maritime security and maritime domain awareness,” the statement said, but did not provide details.

“The leaders exchanged views on regional maritime security, non-traditional threats, ongoing efforts to secure peace in the Korean Peninsula, supporting free trade, and advancing the rule of law, including in the South China Sea,” the statement added.

The summit meeting was held hours after Duterte addressed the Nikkei International Forum on the Future of Asia, where he questioned China’s claims to the entire South China Sea. It was a rare criticism of the country he had consistently praised and defended, and even allowed to venture into oil exploration in Philippine waters despite strong calls against it.

Three days before he addressed the Nikkei forum, Malacañang released Executive Order No. 80  removing a major roadblock in the oil exploration deal with a Chinese state-owned oil producer. Duterte signed it on May 28.

During his meeting with Abe, Duterte also welcomed Japan’s “fresh commitment of around 25 billion yen for the development of Mindanao’s road network, vocational training facilities and equipment, water supply development in the Bangsamoro, and livelihood programs, among other projects,” the statement said.

“They explored opportunities to tap the demographic complementarity between the two countries to drive economic growth, including the possibility of Japan opening its door to skilled foreign labor,” it added.

Duterte’s final activity in Tokyo was a banquet that Abe hosted for him.

Malacañang said about $5 billion in business deals were signed during the trip, estimated to generate over 80,000 jobs. – Rappler.com