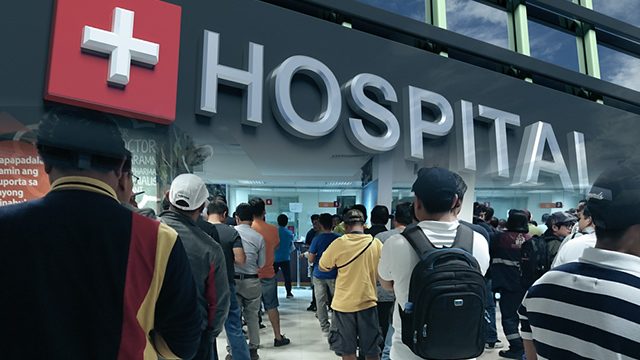 Facebook Twitter Copy URL
Copied
Under House Bill No. 9202, the Department of Health would be mandated to allocate funds for the OFW hospital under the annual national budget

MANILA, Philippines – The House of Representatives approved a bill that would create a hospital dedicated to overseas Filipino workers (OFWs) and their legal dependents.

If passed into law, HB No. 9202 would establish an OFW hospital with “at least tertiary level of care” for Filipino migrant workers and their dependents. The hospital will be under the jurisdiction of the Department of Health (DOH).

Under the bill, OFWs, including active and non-active contributors of the Overseas Workers Welfare Administration, and their legal dependents would be entitled to receive comprehensive and total health care services from the OFW hospital.

Repatriated OFWs in need of medical assistance would be primarily sent to the OFW hospital.

HB No. 9202 would also ensure funding for the OFW hospital, as the DOH would be mandated to allocate funds for it under the department’s proposed annual budget.

The bill’s signing into law, however, seems bleak, as its Senate version remains pending at the committee level with two days to go before session adjourns.

The construction of the country’s first OFW hospital began in May in San Fernando City, Pampanga. The costs of the P400-million hospital will be shouldered by the Bloomberry Cultural Foundation Incorporated, the corporate social responsibility arm of the Razon-led Bloomberry Resorts Corporation, which owns and operates Solaire Resort and Casino. – Rappler.com