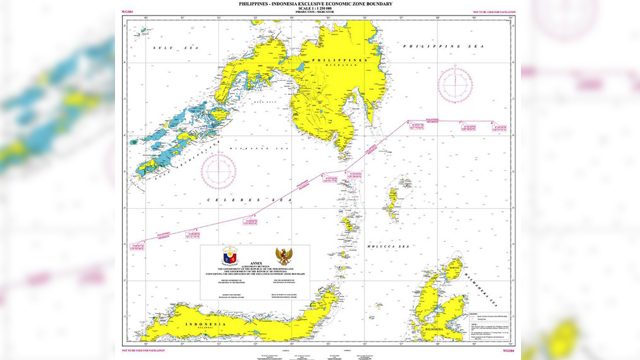 Facebook Twitter Copy URL
Copied
Under the treaty, there will be a clear boundary between the two nations, helping Filipino and Indonesian fishermen to operate peacefully and properly

MANILA, Philippines – The Senate on Monday, June 3, concurred with the ratification of the treaty that draws a boundary between the overlapping exclusive economic zones (EEZs) of the Philippines and Indonesia.

Voting 20-0, senators adopted Senate Resolution No. 1048, which concurs with the historic agreement signed in May 2014. It was the Philippines’ first maritime boundary treaty.

Senator Loren Legarda, chairperson of the Senate committee on foreign relations, said the concurrence with the agreement, which is a legally binding instrument, would help resolve and protect the rights of Filipino vessels and fishermen arrested, detained, or punished for fishing in Indonesia’s EEZ.

“With a clearly demarcated EEZ boundary as guided by the official chart, Filipino fishing vessels and fishermen will be able to operate and undertake livelihood activities in our EEZ knowing where the Indonesian EEZ begins,” Legarda said.

“Law enforcement authorities of both countries will now know the maximum extent of their respective jurisdictions where they are mandated to implement laws, rules, and regulations on environmental protection and maritime security,” she added.

Under the agreement, the National Mapping and Resource Information Authority of the Department of Environment and Natural Resources and its Indonesian counterpart, the Geospatial Information Agency and the Hydro-Oceanographic Office of the Indonesian Navy, shall work together to determine the actual delineation of the sea points and geodetic lines between the two countries.

The Philippines and Indonesia are State Parties to the 1982 United Nations Convention on the Law of the Sea, which gave parties entitlements to a 200-nautical-mile EEZ. States have sovereign rights to explore and exploit, and conserve and manage natural resources, among others, within their EEZ.

The two countries, however, have overlapping EEZs in the Mindanao Sea and Celebes Sea, and in the southern section of the Philippine Sea in the Pacific Ocean.