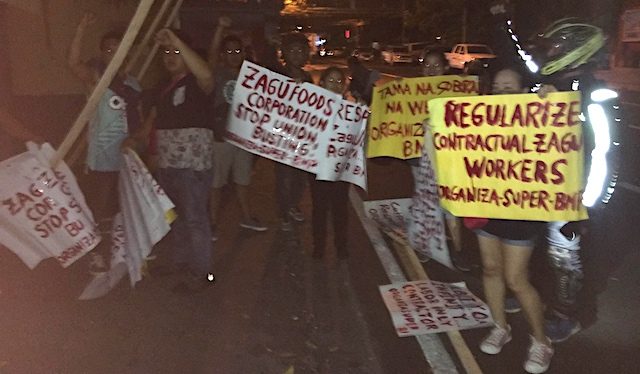 Workers and unionists of the Organization of Zagu Workers-Solidarity of Unions in the Philippines for Empowerment and Reforms (Organiza-Super) began the strike at 4 am on Thursday.

“On Zagu’s 20th year, we demand that management correct their wrongs and treat their workers fairly! Tama na! Sobra na! Welga na (It’s too much! We’re on strike)!” Organiza-Super president Shirley Fulgencio said in a statement.

Zagu, owned by Genevieve Lim Santos, will mark its 20th anniversary on June 20. It has over 500 stores nationwide.

The union filed a notice of strike in January, and the strike pushed through months later, after talks facilitated by the National Conciliation and Mediation Board fell through earlier this week, Organiza-Super said.

Union secretary Hazel Calain said the workers formed the union to address the company’s “illegal labor-only contracting and unfair labor practices.” She noted that about 250 workers serving core functions as machine operators and service crew “are contracted out from 3 different service cooperatives and manpower agencies.”

“This is a clear violation of DO 174 which states that companies cannot contract out jobs that are directly related to their business. Furthermore, all the supervisors and the equipment that these contractual workers use belong to Zagu, not the contractors. These are already prohibited by the same law,” she said.

Fulgencio said there were previous attempts by Zagu management to intimidate the workers against going on strike.

“We will not cower this time! A lot of our union members have rendered more than 10 years of service to this company…. However, not only has our contribution not been recognized, we continue to suffer harassment and illegal contractualization. Enough is enough!” Fulgencio said. – Rappler.com