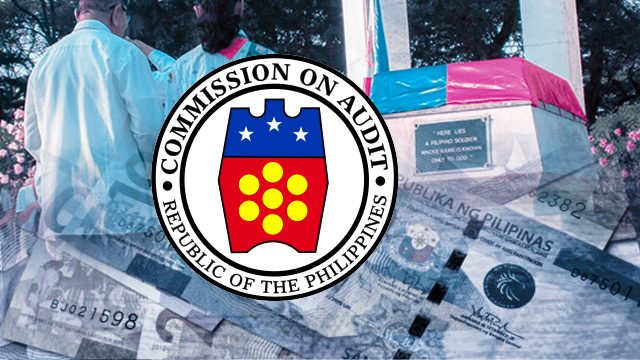 MANILA, Philippines – The Philippine Veterans Affairs Office (PVAO) was flagged by state auditors for its payment of P70.25 million worth of pension to 5,721 soldiers who turned out to be dead.

The pension for dead soldiers made up 84.5% of the total amount that the PVAO paid in pension for 2018, according to the annual audit report on the agency.

“Comparison of the payroll of pensioners and list of reported deaths for CY 2018 disclosed that 5,721 or 84.5% out of 6,768 total reported deaths continuously received their regular monthly pensions which ranged from 1 to 64 months, thus [resulting] in the overpayment amounting to P70,250,300.00,” said the Commission on Audit (COA).

COA recommended that the PVAO identify the officials involved in the lapse and “hold them liable.”

This is apparently a lingering problem in the PVAO because from 2015 to 2016, the agency also paid pension to dead veterans. The agency, in fact, improved in 2018.

“The period covered for the continuous payment of regular monthly pension to deceased pensioners decreased to 1 to 65 months as compared to 1 to 132 months continuous remittance…for FYs (fiscal years) 2015 to 2016,” said COA.

State auditors said that of the P70.25 million given to dead veterans, the PVAO has already recovered P33.79 million, which leaves them with P36.45 million more to get back.

“However, the recovered amounts were still deposited in PVAO servicing banks and not remitted to the Bureau of the Treasury in violation of Section 10 of General Provisions of [the] General Appropriations Act,” auditors said. – Rappler.com