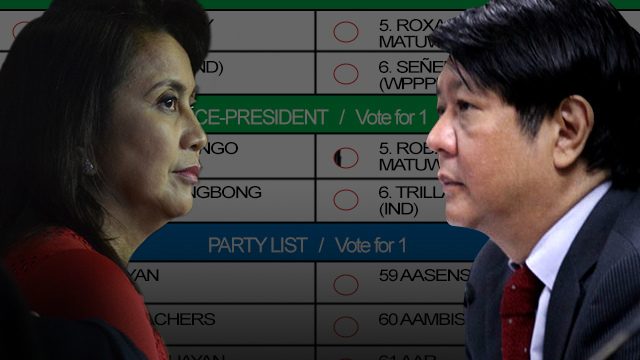 Facebook Twitter Copy URL
Copied
Robredo claims that the recount in 3 pilot provinces selected by Marcos has given her 15,000 more votes, based on unofficial numbers from the electoral tribunal

“Without preempting the resolution of the Honorable Tribunal, the result of the revision, recount, and re-appreciation of the ballots clearly confirm the victory of protestee Robredo. Wherefore, it is respectfully prayed to the Honorable Tribunal to immediately resolve all pending incidents after the revision and recount of the ballots from 3 pilot provinces,” said Robredo’s motion.

What’s the claim? Robredo claims that the recount and revision showed an additional 15,000 votes for her, basing on unofficial numbers from the recount being done by the PET.

PET has not, and does not, give official updates on its ongoing revision. But both the Robredo and Marcos camps have revisors in the recount, making them privy to official proceedings.

The official count from the 2016 results showed Robredo with 263,473 lead over Marcos.

Based on recount from pilot provinces Camarines Sur, Negros Oriental, and Iloilo, the Robredo camp is claiming that the lead has become 279, 215 or an increase of around 15,000 votes.

The discrepancy, Robredo claims, comes from the ballots initially counted as stray for not following the 50% threshold.

(During revision of ballots, some ballots showed that voters did not properly shade the ovals. Those types of votes were not counted by the vote-counting machines.)

(But in the event of a revision and recount, these votes will be counted and it will show that there are close to 15,000 votes on our part which were not counted by vote-counting machines.)

Is it a substantial discrepancy? The pilot provinces were selected by Marcos.

The PET will assess the result of the recount from those 3 pilot provinces and decide whether to move on to a recount of more provinces.

The big issue to be resolved is whether there is substantial discrepancy.

They again attributed the discrepancy to the shading of ballots.

“These botes that should have been credited to protestee Robredo but was declared as stray during the revision, recount and re-appreciation of ballots,” said the motion.

“There are no official findings yet by the PET as to figures recovered by either party. What they have at the moment are all self-serving assumptions meant to mislead the Filipino people who have long been waiting for the result of the election protest filed by Senator Bongbong Marcos,” said Rodriguez. – Rappler.com