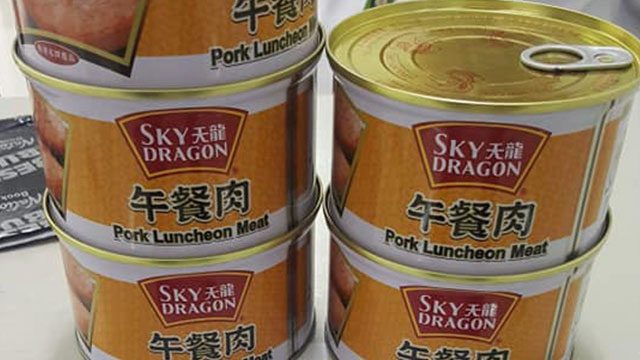 DAVAO CITY – The Bureau of Animal Industry (BAI) has confirmed that the canned goods seized from a returning Filipino at the Clark International Airport in Pampanga in March are contaminated with the African swine fever virus, Agriculture Secretary Emmanuel Piñol said on Friday, June 14.

According to Azul, the protocol used in determining the presence of the ASF virus in the seized canned meat was also the same protocol adopted in 2012 by the Food Agriculture Council and is being used in at least 10 Asian countries.

Azul said that the Philippines remains African swine fever-free despite the findings.

“The detection of the virus in seized products does not change Philippine’s African swine fever-free status,” she said.

Azul added, however, that the latest findings should serve as a warning to the swine industry and to Filipinos who continued to bring in pork products from the affected countries despite the ban.

Azul also noted that this was “an acknowledgment of the catastrophic threat on our doorsteps.”

“If introduced, ASF would have a significant impact on pig health and production and contribute to enormous economic losses,” Azul added.

The virus that infects domestic pigs and wild boars has devastated the swine industry in several countries, including in southern Europe. China, the world’s largest consumer of pork products, has also suffered from the ASF outbreak, with farmers losing billions of dollars due to mandatory culls.

While the ASF doesn’t affect humans, experts advised that pork should be properly prepared as there are also other pathogens that could be transmitted to the consumer.

In the Philippines, the Department of Agriculture has advised against the practice of feeding pigs with discarded food wastes, as a precaution.

In another Facebook post on Friday, Piñol shared a photo of the tainted luncheon meat, and stressed the importance of vigilance in keeping pork products of affected countries out of the Philippines.

“Kung nakalusot po ito at naipakain sa mga alagang baboy ang tira-tira maaring kumalat ang sakit sa ating mga babuyan at magiging sanhi ng pagkasira ng ating hog industry (If this got through and the scraps were fed to pigs here, the virus would spread and would lead to the devastation of our hog industry),” he said.

(To those who are saying that we are only overreacting, and to  those complaining about the strict quarantine protocols, this is proof of the dangers we are facing. Let’s not be smart alecs and stubborn. Follow the quarantine officers in out airports.)

Piñol might have been referrring to the case of a returning Filipino who brought in 32 cans of Ma-Ling from Hong Kong in May, which quarantine officials confiscated at Clark Airport. The woman sought the help of broadcaster Raffy Tulfo, who berated those who seized the goods, and interceded to get the Bureau of Customs to release the goods.

Piñol also said that the DA got President Rodrigo Duterte’s approval to use its Quick Reaction Fund “for the emergency procurement of 20 units of X-ray machines which will be established in all international airports of the country to check agricultural products, especially meat, brought in by passengers.”

He said it was Finance Secretary Carlos Dominguez III, as head of the Cabinet Economic Development Cluster, who endorsed the DA proposal.

Piñol said Customs areas in all airports will be installed with meat and agri X-Ray machines to check hand carried baggage, especially of passengers coming in from ASF-infected countries.

“In the proposal submitted by the DA, a total of P130 million from the QRF will be utilized for the immediate purchase of the X-Ray Equipment and the implementation of additional safeguards against the entry of agricultural products through the airports,” Piñol added.

Earlier in June, a shipment containing meat products from Guanzhou, China, whose hog livestock is being devastated by ASF, was intercepted at Subic Freeport.

Pork and processed pork products from China and other countries which recorded incidences of ASF are banned from entering the country. – Rappler.com