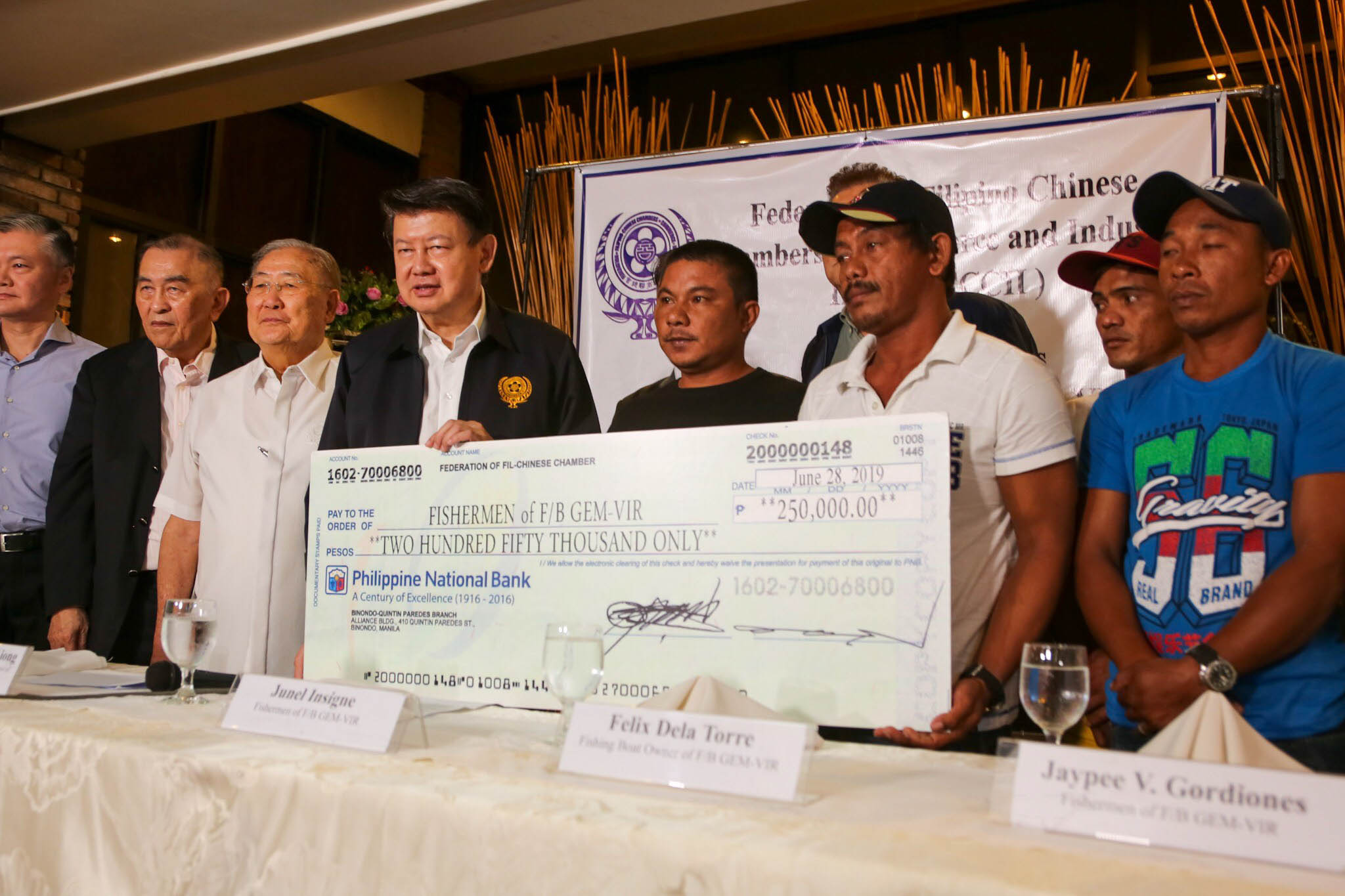 According to Liong, the assistance will be given through a check and is intended to cover the repairs of the boat, which was rammed by a Chinese fishing ship in the West Philippine Sea on June 9. (TIMELINE: Sinking of Filipino boat in West PH Sea by Chinese ship)

“There will be additional cash and rice for them during the repair of the boat,” Liong said, when asked about the assistance the chamber will give for the fishermen alone.

Aside from funds to repair the damaged boat, the 22 fishermen also received P250,000 intended to help support their families while Gem-Ver remained on land. The FCCCII also gave them 50 sacks of rice and promised to fund the construction of 5 public schools for the fishing community of San Jose, Occidental Mindoro.

As he handed over the check to the fishermen, Liong said “Today [we are] giving our immediate assistance and aupport to our fellow countrymen, the 22 fishermen…. We express our sincere concern for their welfare and our solidarity with them.”

Remember the ramming: On June 9, a Chinese fishing vessel rammed the rear of Filipino fishing boat Gem-Ver near Recto Bank (Reed Bank), an underwater reef formation which belongs to the Philippines.

The impact left a gaping hole at the back of the Filipino boat, causing most of it to sink. After the collision, the Chinese abandoned the Filipino fishermen to sink with the boat. The Filipinos were able to survive by rowing to a Vietnamese fishing vessel 5 nautical miles away.

The Gem-Ver was later salvaged and kept afloat by other Filipino fishermen who sailed to the wreckage and strapped water drums to its sides and temporarily patched up the hole with plywood.

Why this matters: The sinking ruined the boat’s machinery (engine, water pump and others), and expensive gadgets were lost along with days-worth of catch.

According to the estimate of the Department of Agriculture and the boat’s owners, the incident has led to the loss of some P2.2 million.

In interviews with Rappler in Occidental Mindoro, the owners of Gem-Ver estimated it would take at least 2 months before the boat can return to the sea and fish once more. – with reports from Sofia Tomacruz/Rappler.com