No bet for Speaker yet, says House party-list bloc 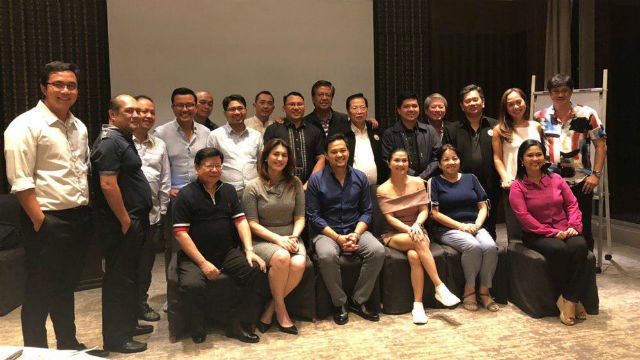 MANILA, Philippines – The 54-member party-list coalition in the House of Representatives clarified on Wednesday night, June 26, that it has yet to choose its candidate in the speakership race.

The bloc issued the clarification after a 4-hour emergency meeting at a posh hotel in Pasig City.

The meeting was prompted by the decision of  1-Pacman Representative Michael Romero, party-list coalition president, to sign a manifesto backing Marinduque Representative Lord Allan Velasco for Speaker without consulting the rest of the bloc members.

Responding to questions, 1-Sagip Representative Rodante Marcoleta, the designated spokesperson that night, said Romero’s signature on the pro-Velasco manifesto did not necessarily mean that the whole party-list bloc had already chosen to support the Marinduque lawmaker.

Romero’s decision to sign the pro-Velasco manifesto on Tuesday, June 26 – initially seen as on behalf of the party-list coaltion – confused members of his bloc who were divided between Velasco and Leyte 1st District representative-elect Martin Romualdez.

AKO Bicol Representative Alfredo Garbin Jr said Romero only signed the pro-Velasco manifesto to thwart a possible term-sharing scheme between Velasco and Taguig City-Pateros representative-elect Alan Peter Cayetano, another aspirant for the top House post who had floated the idea.

“His (Romero) only purpose, as he explained, is to thwart the proposed term-sharing between Congressman Lord and Congressman Alan Peter. But we will vote as a bloc as agreed upon by the coalition [during the] June 19 caucus,” said Garbin.

According to Marcoleta, party-list lawmakers believe a term-sharing scheme would be “inimical to the interest” of the bloc, as explained by Romero.

Romualdez and Velasco are both opposed to a term-sharing scheme.

The hours-long meeting apparenty cleared up the confusion caused by Romero’s participation in the pro-Velasco manifesto, said Garbin.

“Nagtatawanan nga lahat eh (We were all even laughing),” he added.

Anak Kalusugan representative-elect Mike Defensor, who favored Romualdez for Speaker, had the same observation. He particularly praised incoming lawmaker Yedda Romualdez for remaining “civil” even if the speakership bid of her husband was at stake during the discussion.

“Congresswoman Yedda Romualdez was very cordial. She was very respectful, civil the whole time, and I think all of us appreciated the way she handled herself during the discussion,” said Defensor.

The 54 members of the party-list coalition would vote as a bloc during the election for Speaker on July 22.

Their bloc vote will be considered a huge boost for any speakership candidate, as the party-list coalition is the second biggest bloc in the House, after the ruling PDP-Laban’s 90 members. – Rappler.com