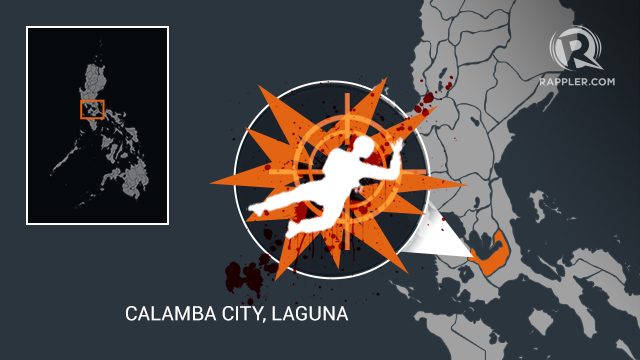 Facebook Twitter Copy URL
Copied
(4th UPDATE) The Department of Education says the victim died at at 4 pm on Thursday, hours after the attack

Police initially said Mark Anthony Miranda had died, but later clarified that he was only pronounced brain-dead.

According to the police report, Miranda was inside a room at the school at about 12:30 pm when he was shot twice. The suspect then fled to an “unknown direction.”

Miranda was rushed to the HealthServ Los Baños Medical Center, where he was pronounced brain-dead.

In an interview with Rappler, Calamba City Police Station chief Police Lieutenant Colonel Jacinto Malinao said the initial investigation showed that the suspect was a security guard at the school, Renz Ivan Balderama.

Balderama and Miranda, according to Malinao, were supposedly living together.

But Malinao said Miranda had filed a case of sexual abuse against Balderama, under Republic Act No. 7610 or the Special Protection of Children Against Abuse, Exploitation, and Discrimination Act.

Miranda’s mother was a drug surrenderer who was arrested again for possession of drugs. She is detained at the Bureau of Jail Management and Penology in Laguna.

The Department of Education (DepEd), which denounced the attack, said in a statement on Friday, July 5, that the victim died at “passed away at 4:00 pm” on Thursday.

“The Department assures the public of its commitment to improve school safety and security, and calls on all stakeholders including the community, the local government, and law enforcement agencies, to help in ensuring that schools continue to be a zone of peace and a safe and nurturing environment for the learners,” DepEd said.

It conveyed its condolences to the victim’s family, and said school officials would provide financial assistance.

DepEd also said that the Castor Alviar National High School will tap Regional and Division Disaster Risk Reduction and Management coordinators, guidance counselors, and nurses, together with the City Social Welfare and Development Office, “to conduct psychological debriefing to address the traumatic effects of the incident to learners and school personnel.”

“It will also gather its School Governing Council, including its Parent-Teacher Association (PTA), to discuss the strengthening of security inside and within the school premises,” DepEd said.

The incident is the latest attack inside a school. In November last year, a Philippine Army soldier shot dead 33-year-old teacher Melody Esbert while she was having class at the Tambubong Elementary School in Bocaue, Bulacan on Wednesday, November 21.

In October 2018, teacher Mylene Veras-Durante was killed as she shielded two students from a knife-wielding assailant who attacked them with a knife inside their school in Pio Duran, Albay. – Rappler.com