Martires on dropping Noynoy charges: No president can be charged with usurpation 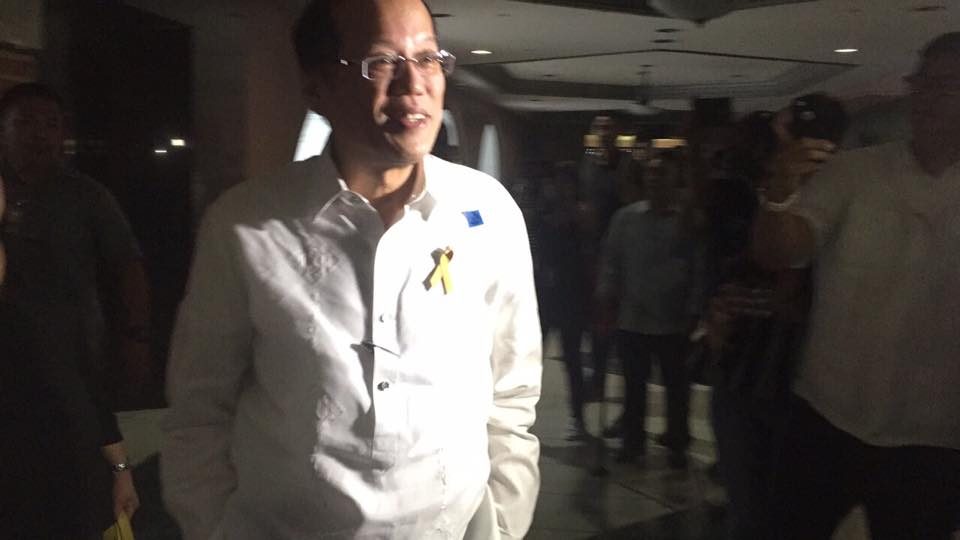 Facebook Twitter Copy URL
Copied
Can homicide charges be filed instead against the ex-president? The Ombudsman says he will 'entertain' a new complaint – if and when it is filed

MANILA, Philippines – Ombudsman Samuel Martires on Friday, July 5, said “no president can be accused of usurpation,” as he defended before the Sandiganbayan his motion to withdraw graft and usurpation charges against former president Benigno “Noynoy” Aquino III over the 2015 Mamasapano bloodbath.

“No president of the Philippines can be accused of usurpation and any lawyer who claims otherwise should go back to law school,” Martires told the anti-graft court’s 4th Division on Friday, in a rare instance when the Ombudsman himself argued for the prosecution in court.

It turned out Martires had wanted to withdraw the charges since he took office in 2018 but it was rejected by his prosecutors until recently. “The prosecutors only agreed with me when I told them that I will sign the motion myself, that’s when they agreed with me, I have been asking them to file the motion since August (2018),” said Martires.

Former ombudsman Conchita Carpio Morales charged Aquno with graft and usurpation for allowing the participation of sacked police chief Alan Purisima in the operation even though Purisima was already suspended at the time. The botched operation, aimed against a top terrorist, ended up killing 44 elite policemen. (READ: Mamasapano clash: What did Aquino know?)

Morales charged Aquino for violating Section 3(a) of the Graft Law which states that it “shall be unlawful for any public officer to persuade, induce or influence another public officer to perform an act constituting a violation of rules and regulations duly promulgated by competent authority or an offense in connection with the official duties of the latter.”

“The President cannot be charged of inducing someone to do something because he is the President, he can direct any civilian to help him. We cannot find a case,” Martires told the court.

Can homicide charges be filed instead? Martires said he will “entertain” a new complaint against Aquino for charges of reckless imprudence resulting in homicide – if it is filed.

“If there’s another case that shall be filed, we will entertain it, we will investigate it,” Martires told reporters on Friday after the hearing.

The Volunteers Against Crime and Corruption (VACC) is expected to file it, depending on scenarios. The VACC, which represents the kin of the slain 44 Special Action Force (SAF) policemen, has always criticized the graft and usurpation charges as “designed to fail” and meant to shield the former president.

Topacio said that if the Supreme Court doesn’t approve filing of homicide charges against Aquino, they will definitely file one before the Ombudsman.

“At that level, which is preliminary investigation, there is no double jeopardy, there is no res judicata, nothing will prevent the Ombudsman, upon the behest of any interested party to file or refile a case with new evidence,” said Topacio.

With the backing of Solicitor General Jose Calida, the VACC and SAF 44 kin have asked the Supreme Court to allow the filing instead of 44 counts of reckless imprudence resulting in homicide against Aquino, Purisima, and former SAF chief Getulio Napeñas.

The SC en banc responded to Calida and VACC’s appeal by issuing a temporary restraining order (TRO) and stopping the Sandiganbayan proceedings. The SC is yet to resolve the meat of the petition, which is to file homicide charges against Aquino.

Does Martires want to file homicide charges? To be clear, Martires said the Ombudsman will not conduct a motu propio reinvestigation, or a reinvestigation on its own initiative.

“Why should I take the initiative?” added Martires.

Asked if he thinks there is a legal basis for filing a homicide case, Martires said: “I don’t want to comment on that.”

Martires’ motion said he is withdrawing charges “without prejudice to the filing of appropriate charges against accused after the conduct of preliminary investigation.”

During the hearing, Aquino’s lawyers simply said they agree to the withdrawal of the graft and usurpation charges. Napeñas’ lawyer appealed that the case against his client be withdrawn as well.

Martires and Aquino. Martires told the court that his objectivity is evident because “if anyone has grudge against Aquino, it is I.”

“I have to make a distinction between my feelings and my brain and my head,” said Martires, who later explained that the grudge stems from the Carlos Garcia plea bargain case that spurred the impeachment complaint and the eventual resignation of Arroyo-appointed former ombudsman Merceditas Gutierrez.

There is another case against Aquino that the Office of the Ombudsman is yet to file – usurpation of legislative powers charges over the Disbursement Acceleration Program (DAP.)

Like the Mamasapano case, complainants in the DAP case – Bayan Muna – do not want usurpation charges. Instead, they wanted to charge Aquino for graft.

“I cannot comment on that because I have not studied DAP, that case is not yet in my hands,” Martires said in Filipino. – Rappler.com