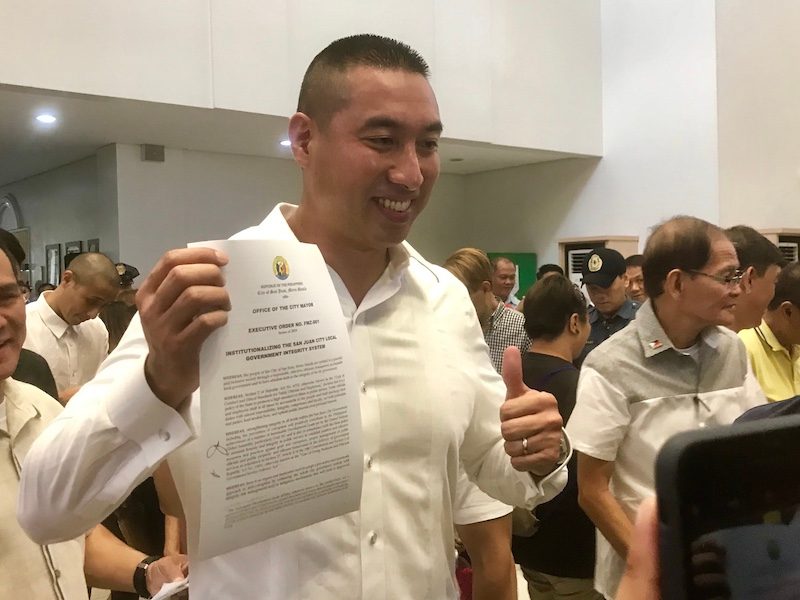 Facebook Twitter Copy URL
Copied
The Gomez administration turned over P1.3 billion to Zamora, but most of the amount will be used for projects already bidded out by the previous mayor

Speaking before city hall employees, he said that the city will need to raise some taxes and look for ways to attract investors, as the city runs on a budget deficit.

The city’s expenses led the new city mayor to enact Executive Order No. 1, institutionalizing the local government integrity system, to keep tabs on all of government transactions. (READ: WiFi for all: Zamora wants to turn San Juan into a ‘smart city’)

Zamora said former mayor Guia Gomez spent a total of P731 million for the new city hall. Of the amount, P520 million went to construction and P43 million to furniture expenses. He questioned the hefty variation order or the alteration to the scope of works in a construction contract which amounted to P167 million.

According to the Local Government Code, only a maximum of 10% of the total construction price is allowed for such variations. The construction cost amounted to P520 million, which means the variation order should be at P52 million only.

Zamora also said the previous administration spent around P500 million for the San Juan Medical Center. He said he will look into whether all commitments were fulfilled and equipment were purchased.

The Gomez administration turned over P1.3 billion to Zamora, but he said that most of the amount will be used for projects that were already bidded out by Gomez.

Zamora said San Juan City is expected to earn a total of P1 billion for 2019, but the projected costs and repayments would amount to P1.1 billion, leaving the city with a deficit of P100 million.

While he questioned the transactions, Zamora said he leaves it to the Commission on Audit to assess the expenses.

(We will review the earmings of the city from the city assessor’s office and business permits, we can still raise a lot from this.) – Rappler.com