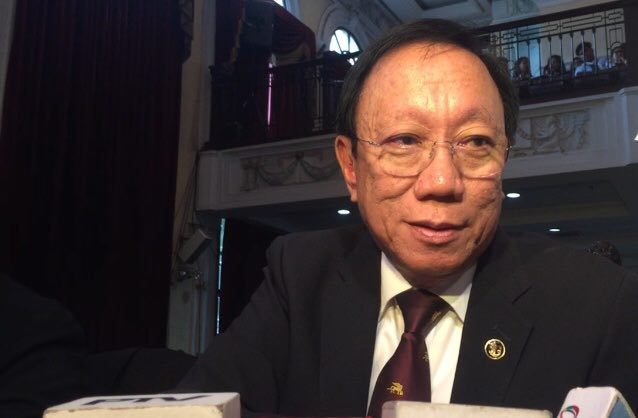 MANILA, Philippines (UPDATED) – A highly-political petition that accuses President Rodrigo Duterte’s administration of neglecting the West Philippine Sea is now in limbo after some fishermen disowned the case prepared for them by the Integrated Bar of the Philippines (IBP).

Solicitor General Jose Calida fired a massive offensive on Tuesday, July 9, during the oral arguments and announced he has secured 19 affidavits of fishermen – or half of those named in the petition – claiming that they did not agree to the case filed on their behalf by the IBP and human rights lawyer Chel Diokno.

The oral arguments on Tuesday were abruptly cut because of the development. All counsels were called for a closed-door meeting by Chief Justice Lucas Bersamin, after which the en banc unanimously agreed to adjourn the session for the day.

After the closed-door meeting, Calida told reporters that he and the petitioners’ lawyers have agreed to dismiss the case altogether.

“The parties, petitioners and respondents, agreed that the case be dismissed by the Supreme Court. To us that’s a win because we are the respondents. This is the fastest case I appeared in,” Calida said.

But asked for confirmation, Diokno and IBP lead counsel Andre Palacios said what they agreed on was to file a motion in the premises by Friday.

“After being called to chambers, both parties agreed to explore the filing of a joint motion in the premises and were given until Friday to do so,” Diokno said.

A motion in the premises is a motion to update the court what the next move will be.

In a message to reporters, SC Spokesman Brian Keith Hosaka said “the Supreme Court cannot confirm what was agreed upon by the parties and their counsels in the case of Abogado et al vs DENR et al, GR No. 246209.”

Calida said the Bureau of Fisheries and Aquatic Resources (BFAR) secured the affidavits after the fishermen themselves reached out to BFAR. Calida claims the fishermen reached out after discovering they had been named in the petition.

(We don’t know anything about this and we don’t support the petition.)

(This is a big deception and they are just using our association.)

The petition was filed by two groups of fishermen:  Kalayaan Palawan Farmers and Fisherfolk Association and Zambales Fisherfolk. The petition was prepared by the Integrated Bar of the Philippines (IBP) and human rights lawyer Chel Diokno.

“The IBP lawyers involved in this case foisted egregious deceit not only on the fisherfolk petitioners but also on this Honorable Court. They bastardized the lofty ideals of the IBP when they used it as a battering ram to take down the Duterte administration,” said Calida.

“One thing sure, they won’t get away with impunity,” Calida added.

Diokno objected to the affidavits because he said the OSG has already made a return of the writ, meaning the OSG has lost the opportunity to raise the matter.

Associate Justice Marvic Leonen said he was “very bothered” by the claims of Calida and expressed disappointment at the fact that both Diokno and IBP lead counsel Andre Palacios barely talked to the fishermen themselves.

“It seems you are blind with your clients,” Leonen said.

Diokno said he spoke to 3 fishermen from Zambales who he said seemed “very aware and very willing” to sign the petition. Palacios said he did not personally speak to any fisherman, and added that IBP local chapter officials had the task to directly coordinate with the fishermen groups.

Leonen asked Calida if he wanted to proceed with the interpellation, since the Court needed further verifications on the supposed affidavits.

Calida instead offered to show a video of the fishermen. Diokno objected but he was overruled by Chief Justice Lucas Bersamin.

After playing the video, Bersamin suspended the oral arguments and called on all counsels from both sides for a closed-door meeting. Leonen later adjourned the session for the day to give more time to resolve the issue.

For the petition, the Supreme Court will assess whether there is sufficient basis to issue a writ of continuing mandamus, which can compel the Duterte administration to enforce better protection of the West Philippine Sea.– Rappler.com