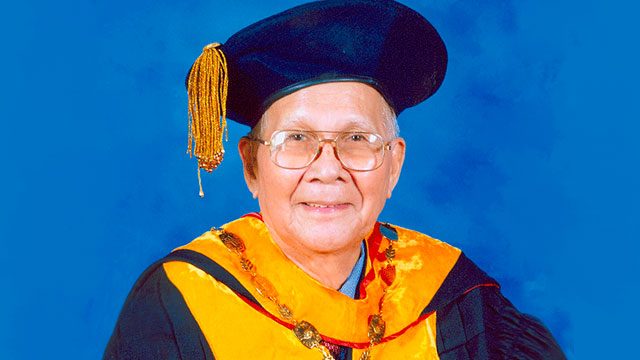 Topacio was conferred the order of National Scientist in 2008. He was elected to the National Academy of Science and Technology (NAST) in 1993.

“We are deeply saddened by the news of the passing of National Scientist Teodulo Topacio. We are extending our condolences and prayers to his family and friends,” said NAST of his passing.

Topacio is known for his contributions to the fields of animal production and animal health in the country.

He studied leptospiral disease in domesticated animals – an undertaking that became the foundation of institutional control measures for the ailment. He also did research on animal diseases like brucellosis, fasciolosis, viral disease in dogs, and tumor in cats.

He also wrote the book Annotated Bibliography on Philippine Biodiversity: Animal Diseases – Prevention and Control. Published by NAST in 2002, the book has served as a guide for veterinary and medical researchers and practitioners in the country.

Topacio, along with other veterinarians, physicians, and the Bureau of Animal Industry, prepared and lobbied for the bill that would eventually be passed as Republic Act (RA) No. 9482 or the Anti-Rabies Act of 2007 and RA No. 9268 or the Philippine Veterinary Medicine Act of 2004.

RA No. 9482 seeks to prevent, control, and eradicate rabies, while RA No. 9268 regulates the practice of veterinary medicine in the Philippines.

Topacio was also a teacher. He taught at the University of the Philippines (UP) Los Baños College of Veterinary Medicine. Throughout his career, he also worked with the Asian Development Bank, United Nations Food and Agriculture Organization, and World Health Organization.

He was born in Manila on November 30, 1924. He finished veterinary medicine at UP and became a veterinarian in 1951. He obtained his master’s degree at Michigan State University in 1956 and his doctorate degree at Purdue University in 1963. – Rappler.com