Jul 24, 2019 6:04 PM PHT
Ryan Macasero
Facebook Twitter Copy URL
Copied
Lawyer Anthony Trinidad, who was shot dead while on his way from a court hearing, is reportedly on the hit list of an anti-communist group 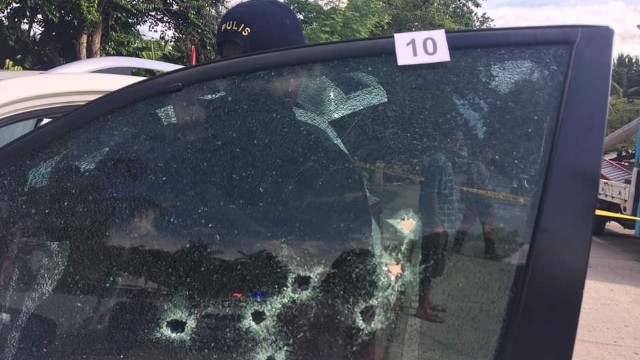 CEBU CITY, Philippines – A lawyer was shot dead and his wife injured when they were ambushed by riding-in-tandem gunmen in Guihulngan City in Negros Oriental on Tuesday afternoon, July 23.

Anthony Trinidad was on his way home from a court hearing when two gunmen aboard a motorcycle drove by his vehicle and shot him and  and wife Novie Marie multiple times.

According to a report from Negros Oriental police, Trinidad, 53, was declared dead on arrival at the hospital while his wife survived the shooting and was treated for injuries in Dumaguete City.

Police officials told local media in Negros that the ambush might be related to cases Trinidad was handling, but they were still determining the exact motive of the attack.

In a statement sent to the media on Wednesday, July 24, the Trinidad family appealed to  authorities to catch the lawyer’s kiillers.

“We are still at a loss on the motives behind this dastardly act because our brother was such a kind-hearted, soft-spoken person who was willing to go out of his way to help people in need,” the family said.

“We are appealing to the government to please help us seek justice for our brother and get the perpetrators behind jail the soonest possible time,” they added.

The Trinidad family also appealed for an end to the “culture of violence”  in the Philippines.

“We cannot and should not constantly live in fear. Stop the killings,” the family said.

In a statement, opposition Senator Leila de Lima called for justice for Trinidad who, she said, represented “political prisoners in Negros” and “was reportedly among the names on a hit list by an alleged anti-communist group.”

The senator said the incident should prompt her fellow lawmakers to support her bill seeking to ensure the safety of human rights defenfers and the unhampered pursuit of their advocacy.

“This latest incident underscores the compelling necessity and urgency for the passage into law of the Human Rights Defenders’ Protection bill, which I refiled this 18th Congress,” De Lima said.

The Defend Negros Network said in a statement on Facebook that Trinidad was reportedly among the names on a list of an alleged anti-communist group called Kawsa Guihulnganon Batok Komunista (KAGUBAK).

“Defend Negros #StopTheAttacks Network condemn in the strongest terms the senseless killings and the violence aggravated by the Memorandum 32 in the entire Negros Island,” the group said in the post.

Trinidad’s killing happened in the same week that 4 police officers were killed after being allegedly set up and ambushed bythe New People’s Army. – Rappler.com