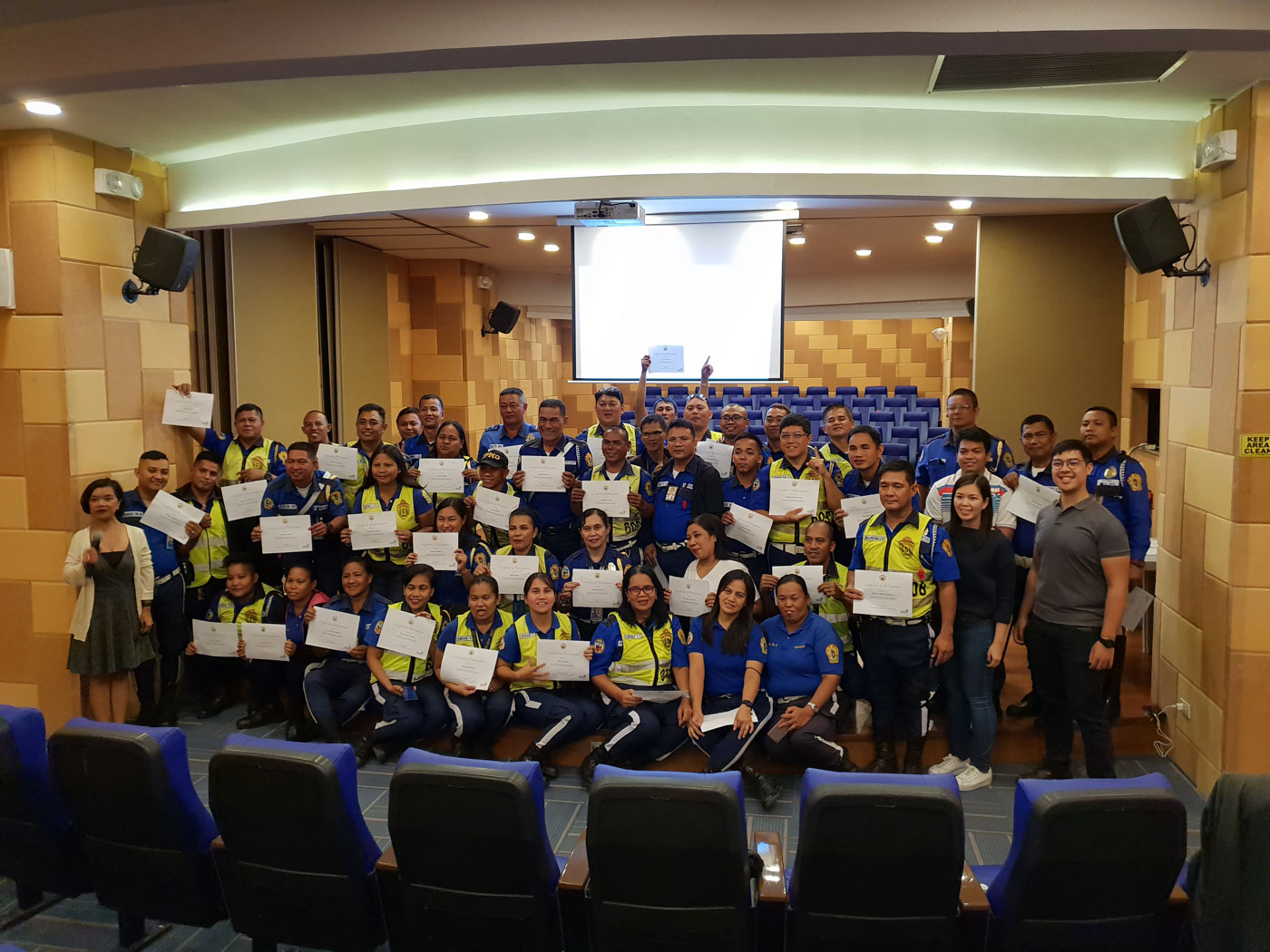 MANILA, Philippines – The “Blue Boys and Girls” of Pasig City have begun taking time off the streets for a brief course on professionalism, which Mayor Vico Sotto promised could lead to their regularization as employees.

Known for their bright blue uniforms, enforcers from the city’s Traffic and Parking Management Office (TPMO) on Friday, August 2, started their Continuing Professional Development Program to reacquaint them with traffic regulations and retrain them in the proper way of doing their jobs, especially dealing with motorists.

“Ang makikiisa sa pagbabago ng kultura ng TPMO at magsisilbi nang may integridad, ay magiging regular pagkalipas ng 1 taon (Those who will follow the culture of change of the TPMO and will serve with integrity, will be regularized after one year),” Sotto said on his official Facebook page after the first session of the training course, adding that the “lazy” or “corrupt” will be apprehended and dismissed.

Sotto aims to fix the TPMO’s “notorious” reputation for extortion and taking bribes from motorists, but also acknowledges the plight of its enforcers who work under 6-month contracts and get paid the minimum wage with barely any other benefits.

The TPMO’s 641 enforcers – a good number of whom are women – will each take a daylong course in batches of 50 over the next several weeks.

On Friday, the first batch of enforcers were in good spirits, sitting in an air-conditioned auditorium at the city hall, away from the smog and blaring horns of Pasig’s busy, congested streets.

After earning their certificates for completing the session, the enforcers said they were grateful for the opportunity to expand their knowledge and be taught new ideas about their job, beyond facilitating vehicle traffic.

But the best part, jested one of the participants, was “nakakain kami nang tatlong beses ngayong araw (we got to eat 3 times today),” because they were served meals and snacks throughout the day.

The enforcers took the chance to air their concerns to officials from the City Transportation and Development Management Office (CTDMO), who were their instructors during the session.

It’s been years since some of them received new uniforms and boots; the ones they have are faded, the boots so worn out it hurts their feet.

They are supposed to receive a monthly ration of rice; they haven’t received any.

Their overtime pay has been delayed for months; they only recently received their backpay from February.

They take offense at being called “notorious.” Why must they bear the shame for the wrongdoing of only a few among their ranks when most of them make an honest living?

(We are the lowest mammals here in Pasig. The way they regard us is now so low, as though they just walk all over our pride in our jobs.)

Sotto has called out the TPMO several times during the city hall’s weekly flag ceremony and warned them to cut their corrupt practices or face sanctions.

He publicly scored the traffic enforcers after he received reports and social media videos of a number of them fleecing motorists. 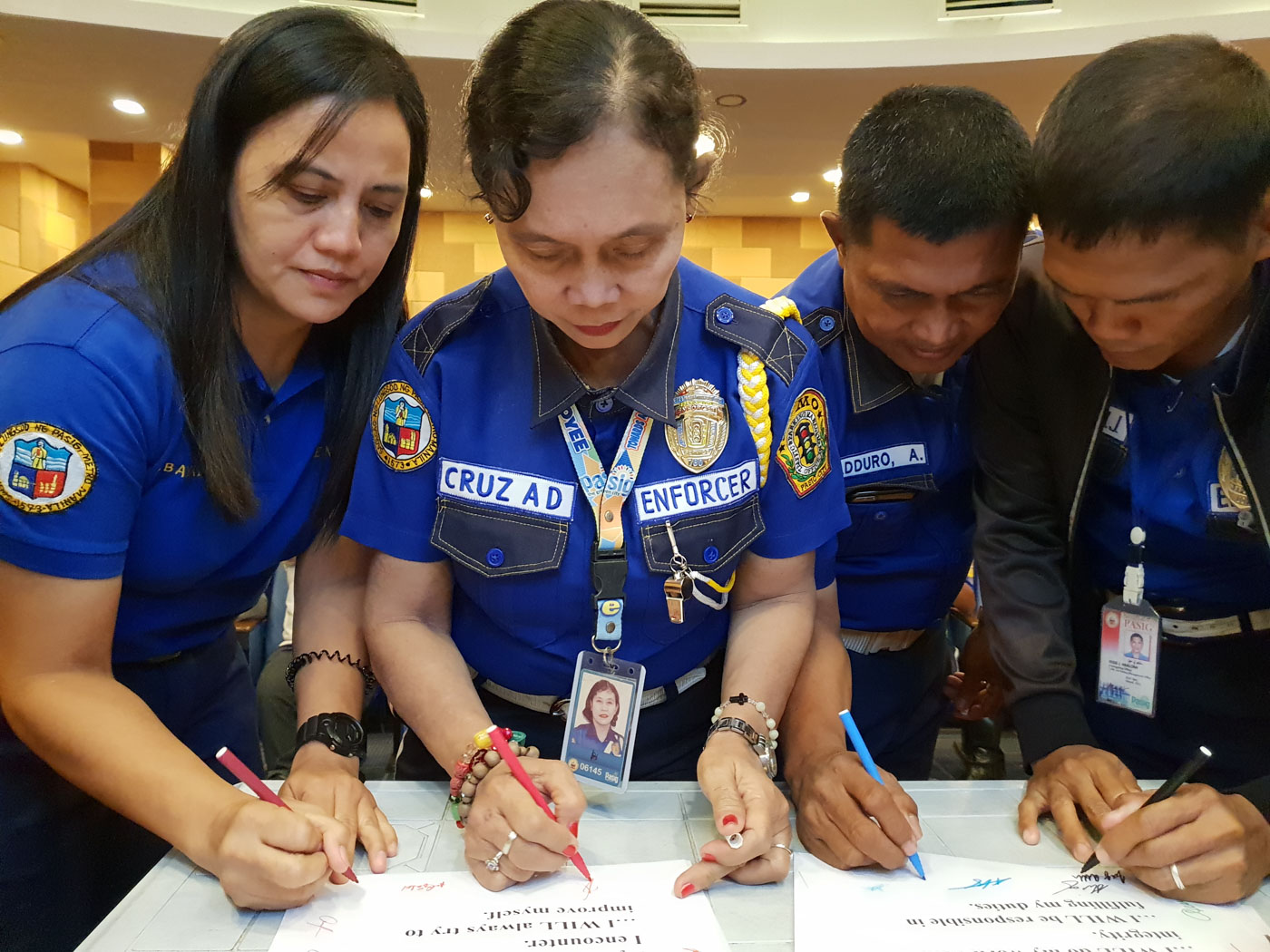 However, Sotto was just as quick to admit the city government’s shortcomings.

He recently cut the traffic enforcers’ weekly duty from 6 days to 5 because they were only paid for 5 days; they had been working a sixth day for free.

“Malaking kaluwagan na po sa amin ‘yon (That is already a big relief for us),” said Alejandra Cruz, a TPMO enforcer since 2008, about having two days off in a week.

“Marami pa kaming magagawa sa bahay. Matutulungan pa namin ‘yung mga anak namin. (There’s a lot we can do in the house. We’ll even be able to help our children.)”

Despite having worked as a traffic enforcer for years, Cruz has been unable to send her 3 children to college. Her son, the youngest, only got to second year high school.

When Cruz started out, TPMO enforcers were only paid P5,000 a month. Now, she gets about double that amount, but it is still barely enough for her family’s needs. Her husband, who used to drive a tricycle, is now unemployed.

(I saw to it that no matter how many Christmases went by, I never took even a centavo from them, not food, nothing at all.)

Cruz said she chose to be a traffic enforcer because she did not like sitting all day at factories, where she used to work. At 55, her decade of standing daily in the sun has taken a toll on her eyes, so she now works the ticket booth at the city hall’s parking building.

Although proud of her clean record, Cruz said she understands how some of her colleagues could not help a few indiscretions, especially when the motorists themselves try hard to wiggle themselves out of a violation ticket.

(My colleagues, they don’t really intend to, say, extort money. They must have really just been so tempted because of their exhaustion, hunger, at least to get some money for a snack. And then they get in trouble. I feel sorry for them, somehow.)

But with the mayor’s new directive to “professionalize” the TPMO’s ranks came hope for the Blue Boys and Girls.

Karen Silva Crisostomo of the Pasig CTDMO, who taught Friday’s course, said although she wished she had more time with the traffic enforcers to make sure the concepts sink in, the hope of getting hired permanently should be self-fulfilling.

“It will affect the department where they work as well as it will also be for their life. If they do good, it also becomes a promotion for them. Then because people will see there’s a change, then there is really reason to make them permanent or to regularize them,” Crisostomo said.

Cruz said she is delighted at the thought of having a permanent job.

(At least we wouldn’t have to worry anymore about the same thing every 6 months…. We would have peace of mind that we’d be permanent in this work. We’d do even better, right?)

Esquivel said a permanent contract would naturally make him better at his job.

(That’s your assurance. You’re finally a  regular employee. You’ll work even harder because you’ve made it. Until you grow old, you’ll have nothing to fear such as a new mayor taking you out because you’re just a casual employee.) – Rappler.com