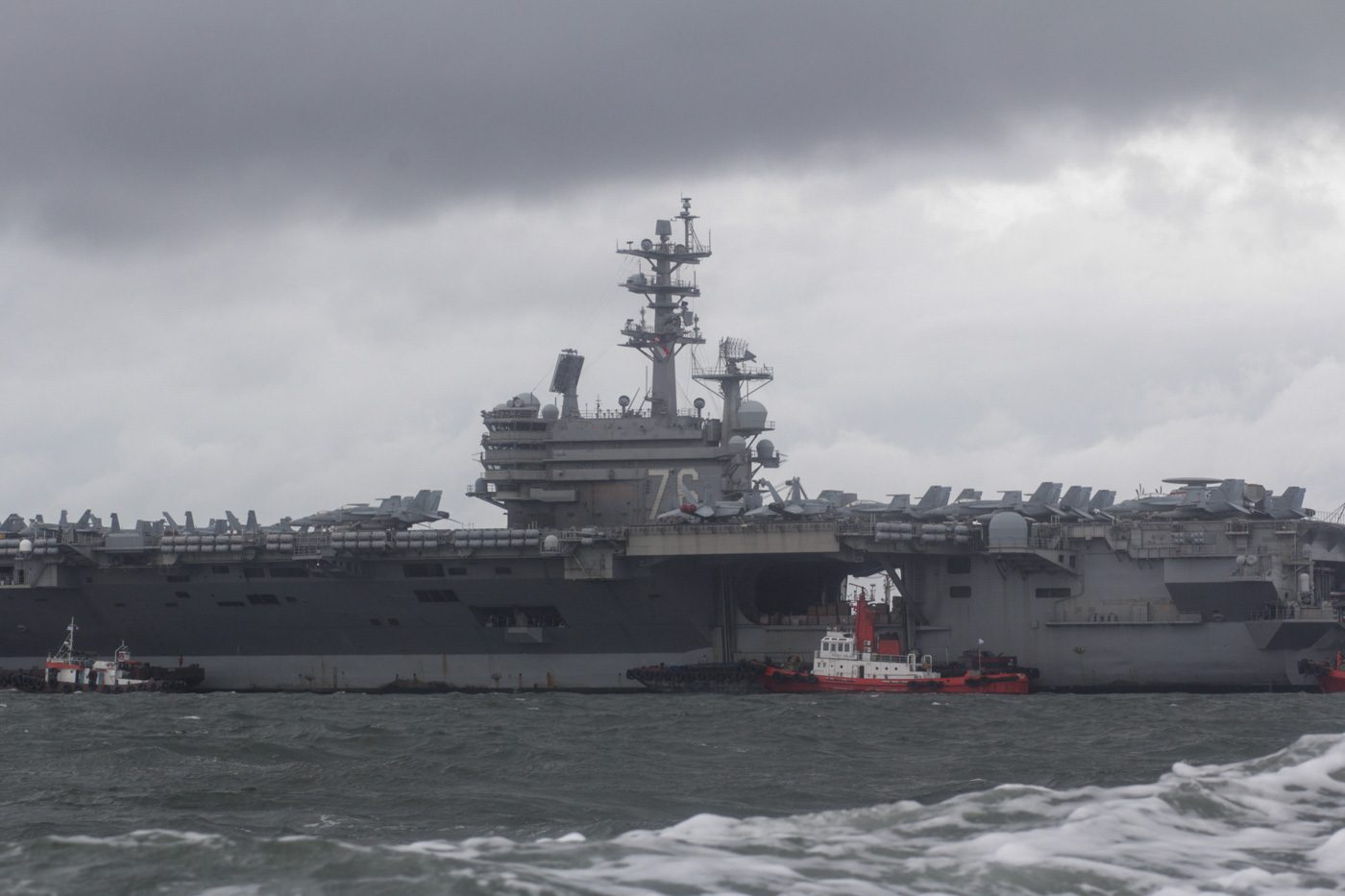 MANILA, Philippines – Its unmistakable silhouette stood out from among the ships dotting the Manila Bay horizon, a dark grey hulk against the rainy monsoon sky.

It was the USS Ronald Reagan‘s second port call in Manila in just over a year, and on Wednesday, August 7, it carried the same message of constancy and assurance as earlier warship visits to its traditional military ally, the Philippines, but against a more blustery geopolitical climate.

Officially, the Ronald Reagan Carrier Strike Group or naval flotilla is in town for “liberty,” a break from patrol duty during which the ships’ more than 5,000 crew get some rest and relaxation in and around Manila, as well as engagements with the Philippine Navy and social events to highlight bilateral ties.

The port call, however, coincides with Manila trying to deal with Beijing’s ships – grey or otherwise – crisscrossing its territorial waters. Philippine attempts at exacting accountability are met with empty rhetoric from the Chinese, as defense chief Delfin Lorenzana pointed out.

Unable to dodge journalists’ questions on geopolitical tensions in the region, the strike group’s commander Rear Admiral Karl Thomas asserted that part of Washington’s response is its naval presence.

“The beauty of this aircraft carrier is that it provides a lot of security and stability to this region. It allows us to go out there and set an environment where these kinds of disputes can be solved in a peaceful manner,” Thomas told reporters in a briefing onboard the warship.

“Our goal is to allow folks to be able to sail and operate wherever international law allows and I think we do that fairly effectively,” he added.

The regional scenario is fraught with unwanted Chinese presence in waters beyond Beijing’s entitlements based on international maritime law: Vietnam has been demanding China to pull out a survey vessel. Reports of Chinese warships traversing Philippine waters incognito have trickled in over the past weeks.

A Chinese trawler suspected to be maritime militia rammed a Philippine fishing boat in June, causing it to founder and leaving the 22 Filipino crew adrift in the waters of Recto Bank near Palawan.

Chinese vessels have also been spotted foraying closer to US territories in Oceana.

Although Washington has held fast to its neutrality on sovereignty disputes, it has consistently asserted freedom of navigation or international ships’ unencumbered access to the vast waters of the South China Sea, including the West Philippine Sea, beyond the 12-nautical-mile territorial waters of coastal countries.

China has laid a supposedly historical claim to practically the entire South China Sea. It has reclaimed and put military installations on 7 reefs in the West Philippine Sea despite an international arbitral ruling that invalidated its sweeping claim.

Esper on Sunday accused China of “weaponizing the global commons,” referring to its virtual occupation of the busy sea lane where roughly $3.4 trillion in international trade passes each year.

“So we have a vested interest, a national interest in ensuring that those maritime commons are free and open,” Thomas said. The Philippine government has also recently used a tougher tone on China. The military called the clandestine passage of Chinese warships a “deception.” Lorenzana characterized China’s actions in the West Philippine Sea as “bullying.” President Rodrigo Duterte said he would raise the arbitral ruling when he visits China later this month.

Manila has openly admitted incapability to drive out Beijing’s vessels from its territorial waters and EEZ, and it benefits incidentally from Washington’s push for freedom of navigation in the South China Sea.

Aside from its overt naval vessels, China wields its presence in the West Philippine Sea through its coast guard that has recently been attached to its navy, and through fishing trawlers that function as maritime militias.

“We certainly operate in a professional manner and that’s what we expect of the other navies of this part of the world,” Thomas said in the briefing.

Three US Navy aircraft carriers, , including the USS Ronald Reagan, made port calls in Manila in the first half of 2018.

The US is expected to maintain a rotational presence in the Philippines under an Enhanced Defense Cooperation Agreement that gives US troops access to a number of Philippine military bases.

Both the US and Philippine militaries hold yearly “Balikatan” or “shoulder-to-shoulder” joint exercises under a Visiting Forces Agreement.

Manila recently got its long-sought affirmation from Washington that their Mutual Defense Treaty covers the West Philippine Sea, where an armed attack on Filipino troops or civilians would trigger a military response from Washington.

Lorenzana earlier proposed to update the treaty after questioning its relevance, but it remains unclear whether that will push through. – Rappler.com