BuCor changes tune: Sanchez may not be freed soon after all MANILA, Philippines (3rd UPDATE) – Bureau of Corrections (BuCor) chief Nicanor Faeldon said on Thursday, August 22, that convicted murderer and rapist Antonio Sanchez may not be among the thousands of inmates set for release soon.

Faeldon acknowledged that there were reports of Sanchez’s violations inside prison that deducts from his good conduct time.

A law on good conduct time allowance (GCTA) can slash the sentence of inmates jailed in the 1990s by up to 19 years. A Supreme Court ruling in June made the 2013 law, Republic Act No. 10592, retroactive.

On Thursday, Faeldon said Sanchez’s misdemeanors may mean he would not be among the thousands to be released soon.

“He may not be qualified to go home today or in the next few months. Mukhang hindi sya mapapasok kaagad (It looks like he would not qualify right away),” Faeldon said.

The BuCor had released around 200 already.

Limping across the maximum security compound on Thursday, Sanchez made a brief appearance before the press wearing khaki pants, his orange shirt tucked in, and thinning hair neatly combed. Sanchez was wearing sunglasses.

Faeldon swore the man was Sanchez in a bid to dispel social media posts that the convict had been  spotted in Calauan, Laguna. 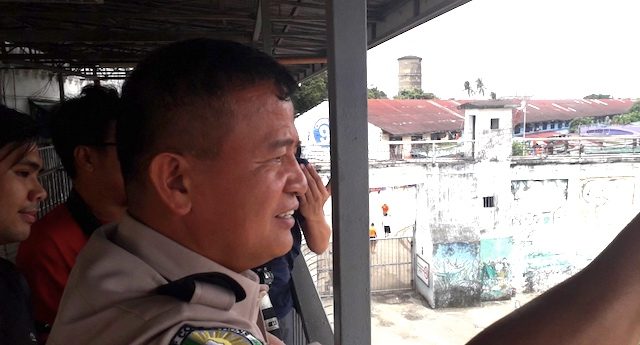 Although Sanchez may not be among those set for the mass release soon, there was no telling for now what a re-computation of his records would reveal.

“Baka abutin pa siya ng several years (he may stay here for several more years). Because that is not discretionary, that is what the law says, we have to compute,” said Faeldon.

So far, he has served 25 years of a maximum 40-year jailtime. (Read our explanation here on why his sentence is limited to 40 years despite 9 terms of reclusion perpetua)

The GCTA law sets  standards on the number days that can be reduced from one’s sentence for a month of good behavior.

In 2006, police filed a complaint against Sanchez when a surprise inspection yielded shabu and marijuana inside his jail cell. That case was dismissed 5 years later, or around 2011, Faeldon said on Thursday.

“I think 2011 it was dismissed by the court. but as far as the BuCor is concerned we have records that it was actually confiscated inside his kubol so again those are other grounds,” said Faeldon.

In 2010, P1.5 million worth of shabu was found stashed inside the statue of the Virgin Mary inside his cell. Sanchez was among those who had kubols inside the Bilibid and in 2015, jail guards seized a television and ab airconditioning unit in his cell – all violations of Bilibid rules.

(His luxurious apartments here…it’s an anti-thesis to what is deemed good behavior. Those are points against his availing of good allowance.)

Faeldon explained that criminal offenses such as the possession of drugs is subject to a separate criminal proceeding. “But that has an administrative counterpart,” said Faeldon, meaning that if determined by the BuCor to be a violation, Sanchez would not be able to avail of the points for that month.

Faeldon added that there would also be an investigation. “If it’s drug trade, you cannot be trading for just one day, so upon investigation, you will lose your GCTA for the period before that,” Faeldon said.

Faeldon cited other examples of “bad conduct”: “If you figure in a brawl without reason, you instigated a riot, you destroyed property, you hurt a fellow inmate, you assaulted a jail officer, you brought in cigarettes.”

Faeldon said there were around 60 personnel reviewing the records round the clock.

He also said the BuCor was exerting its best effort to make sure the review could not be corrupted or manipulated.

“Sometimes there are loopholes in the implementation, based on the weaknesses of humans, but we want them to implement it religiously as specified by the manual…. But to assure that that is 100%, I would be lying,” Faeldon said.

On the same day Faeldon made the statement, thousands signed a petition on Change.org urging the Department of Justice to affirm the 7 life sentences of Sanchez, over the rape and murder of Eileen Sarmenta, and the murder of her boyfriend, Allan Gomez, in 1993.

The families of the victims, anti-crime groups, and some lawmakers have opposed the early release of Sanchez. Eileen Sarmenta’s mother demanded proof from the government that Sanchez really behaved while in jail.

To this, Faeldon said, “We are inviting everyone to please go here and participate; not just the family, we are inviting all of you.”  – Rappler.com