Lawmakers to DOH: Why only 33 areas for Universal Health Care rollout? 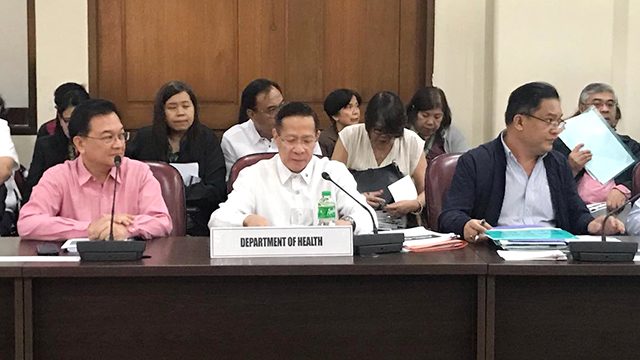 MANILA, Philippines – Lawmakers on Wednesday, August 28, asked the Department of Health (DOH) to explain why only 28 provinces and 5 cities – a total of 33 areas – were chosen for the rollout of the Universal Health Care (UHC) law.

The DOH identified the following provinces and cities as “UHC implementation sites” as it defended its proposed P160.15 billion budget for 2020 before the House committee on appropriations:

Health Secretary Francisco Duque III said that the DOH has made a “progressive realization” that there could not be a national rollout of the UHC for its first year of implementation in 2020.

“The keyword is progressive realization given that we cannot do a national rollout because of budgetary constraints and also because of readiness,” Duque added. (READ: EXPLAINER: What Filipinos can expect from the Universal Health Care Law)

The DOH said it would need about P257 billion to implement UHC in its first year.

President Rodrigo Duterte signed the landmark law – Republic Act (RA) No. 11223 which grants health coverage for all Filipinos – on February 20. The law intends to automatically enroll every Filipino in the National Health Insurance Program, which will be handled by the Philippine Health Insurance Corporation (Philhealth).

During the hearing, Lanao del Norte 1st District Representative Khalid Dimaporo asked the DOH how it chose the 33 sites.

DOH Undersecretary Gerardo Bayugo explained in a mix of Filipino and English that the 33 were chosen as “they were the first ones to indicate that they are committed to implement UHC, and we included it in preparing our budget proposal for 2020.”

She said that other local governments expressed their commitment to implement the UHC later on, or after the DOH had submitted its proposed budget to the Department of Budget and Management. Bayugo added that these are areas would be included in the next budget cycle.

DOH  officials further explained that they asked for letters of commitment signed by respective governors and resolutions from provincial councils ensuring the provinces’ initiative to implement the landmark program. This was done after consulting with DOH regional offices about potential provinces that could be included in the first UHC rollout.

Not taking the agency’s explanation lightly, Dimaporo said he felt that his entire province was “discriminated.” He said the basis for inclusion should be which local government units (LGUs) that need UHC most.

“I think that we (Lanao del Norte) have been cheated out of the possibility of joining the first batch of the rolling out of this UHC. I feel that the DOH and the regional directors chose the easiest LGUs to implement UHC when they could have instead looked into areas where we’re really having a hard time,” Dimaporo said.

“I hope, Mister Chair that, the good secretary will remember the province of Lanao del Norte when they consider the second batch,” he added.

Duque stood by the DOH decision to roll out UHC in batches, citing the agency’s “limitations.”

“This is a progressive realization because there are really limitations. [First] the budget is not even enough. Given the constraints, we thought it prudent to roll out not nationwide but within areas that [have] undergone an assessment of capacities,” the health secretary said.

In this way, he added, the DOH and LGUs could learn from the experience of the first batch of provinces and cities, in their bid to optimize service delivery, health regulation, health care financing, governance and performance accountability, and health systems development under the law. – Rappler.com