‘How about according to zodiac sign?’: Netizens mock ‘brand coding’ traffic scheme 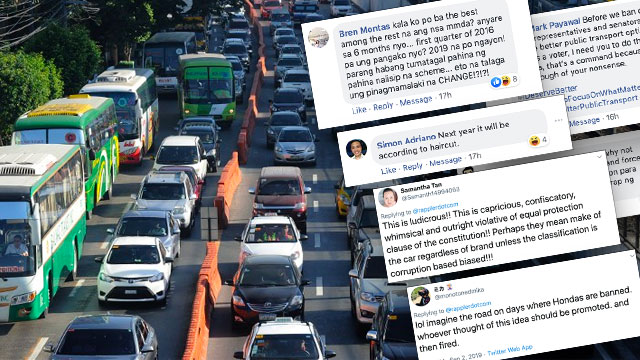 Netizens on Monday, September 2, poked fun at the traffic scheme proposed to the Metropolitan Manila Develeopment Authority (MMDA) seeking to ban certain car brands from EDSA on specific days to address traffic congestion. (READ: How about you’re banned from EDSA according to the car you drive?)

The proposal, which was submitted by former Philippine Amusement and Gaming Corporation consultant Ariston Gorospe, included the number of units sold per car brand in 2018 and used them as identifying which brand should be banned on specific days:

Netizens, however, did not buy the idea of the new proposal, saying the scheme is another “band-aid” solution to traffic. Some even took a swipe at the MMDA, saying it’s not the traffic but the agency that should be fixed first so it could come up with “well thought of” solutions to the traffic problem.

Carlo Cruz expressed his frustration over the government, saying the administration seemed to be “experimenting” on its solution to the traffic problem.

“We basically are all their guinea pigs at this point,” wrote Cruz.

Tessa Banal-Pascual shared that sentiment. She said the government seemed to come up with traffic solutions the way one would do a school project.

Just last week, the MMDA publicized another proposal – making EDSA a one-way road – which commuters and a senator called “ridiculous and not well thought of.”

What’s next? According to haircut?

While most netizens pointed out the serious effects of the proposed “brand coding” traffic ban on EDSA, some handled the issue with humor.

‘Why not fix public transpo?’

But for many the government should still focus on fixing public transporation. John Mark Payawal appealed to lawmakers to provide better public transportation options first before banning cars.

This was echoed by Rj Mesina and Miguel Florendo.

This was not the first time that a proposal concerning cars was publicized by the MMDA. In 2018, the proposed traffic scheme banning driver-only cars during rush hours also angered motorists. (READ: Why single out singles, netizens ask MMDA)

In August, commuters also slammed MMDA for its strict implementation of the yellow bus lane policy, which resulted in traffic gridlocks and affected mostly city buses. This also coincided with the dry run of the provincial bus ban, which netizens considered “anti-poor and anti-commuter.”

Halfway into his term, President Rodrigo Duterte claimed he has fulfilled all of his campaign promises, except for the one about easing traffic along EDSA. (READ: Duterte claims he fulfilled all promises except easing EDSA traffic)

What do you think is the biggest problem with the proposed solutions to traffic? Sound off in the comments! – Rappler.com