Sep 6, 2019 3:32 PM PHT
Lian Buan
Facebook Twitter Copy URL
Copied
(UPDATED) Satur Ocampo, a co-accused, is excluded in the warrant because of an earlier bail grant by the Supreme Court 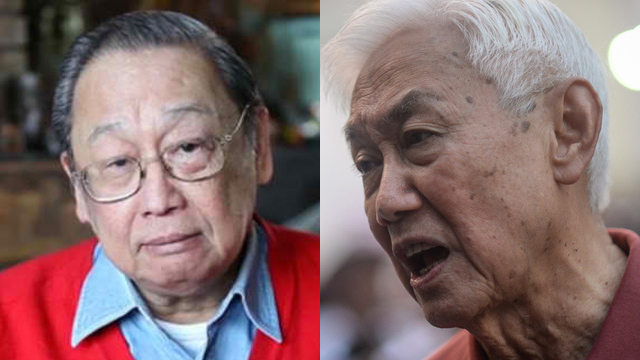 The warrant includes other key figures of the CPP-NDF like Rodolfo Salas and Eduardo Sarmiento.

This is for multiple counts of murder filed in 2007 related to the alleged purge of communists. The military claims to have discovered a mass grave in Inopacan, Leyte in 2006 that contained alleged skeletal remains of at least 100 people executed from 1985 to 1992.

This case has reached the Supreme Court, which granted activist Satur Ocampo bail. The Department of Justice (DOJ) earlier moved for the rearrest of Ocampo, but it was denied by the same court on lack of authority to supersede the Supreme Court bail.

The warrant also excluded other co-accused Rafael Baylosis and Randall Echanis who were also earlier granted bail by the Supreme Court.

The Public Interest Law Center (PILC) said the Department of Justice (DOJ) moved for the issuance of a warrant on the basis of a 2014 amendment to the charges, which changed the information from multiple murder to 15 counts of murder.

“The motion came as a belated maneuver, filed when the cases are now at the trial stage and after the presentation of more than 25 witnesses,” said PILC managing counsel Rachel Pastores.

Malacañang called on Sison to heed the warrant. Sison is in exile in The Netherlands.

“Mr. Sison should unchain himself from his exile and face the music. His illusive if not illusory dream of wresting political from the present dispensation should give way to a principled and courageous stand to face trial. He is welcome to come home to avail of his constitutional right to confront his accusers and prepare for his defense,” said Presidential Spokesperson Salvador Panelo in a statement on Friday, September 6.

Pastores called the move to rearrest “an attempt to have critics of the Duterte administration jailed.”

“It has become all too obvious that the prosecution is desperate and hell-bent on putting all accused in jail,” said Pastores.

The Department of the Interior and Local Government is pushing for the restoration of the anti-subversion law which would make it illegal to be a member of the Communist Party of the Philippines (CPP).

The DOJ is also seeking to tag Sison and 7 others as terrorists. The others covered by the warrant are: