Sep 9, 2019 6:47 PM PHT
JC Gotinga
Facebook Twitter Copy URL
Copied
The chief of the military’s Western Mindanao Command says terror groups in Mindanao could be weakening, while an analyst says they are evolving and could launch devastating attacks in the future 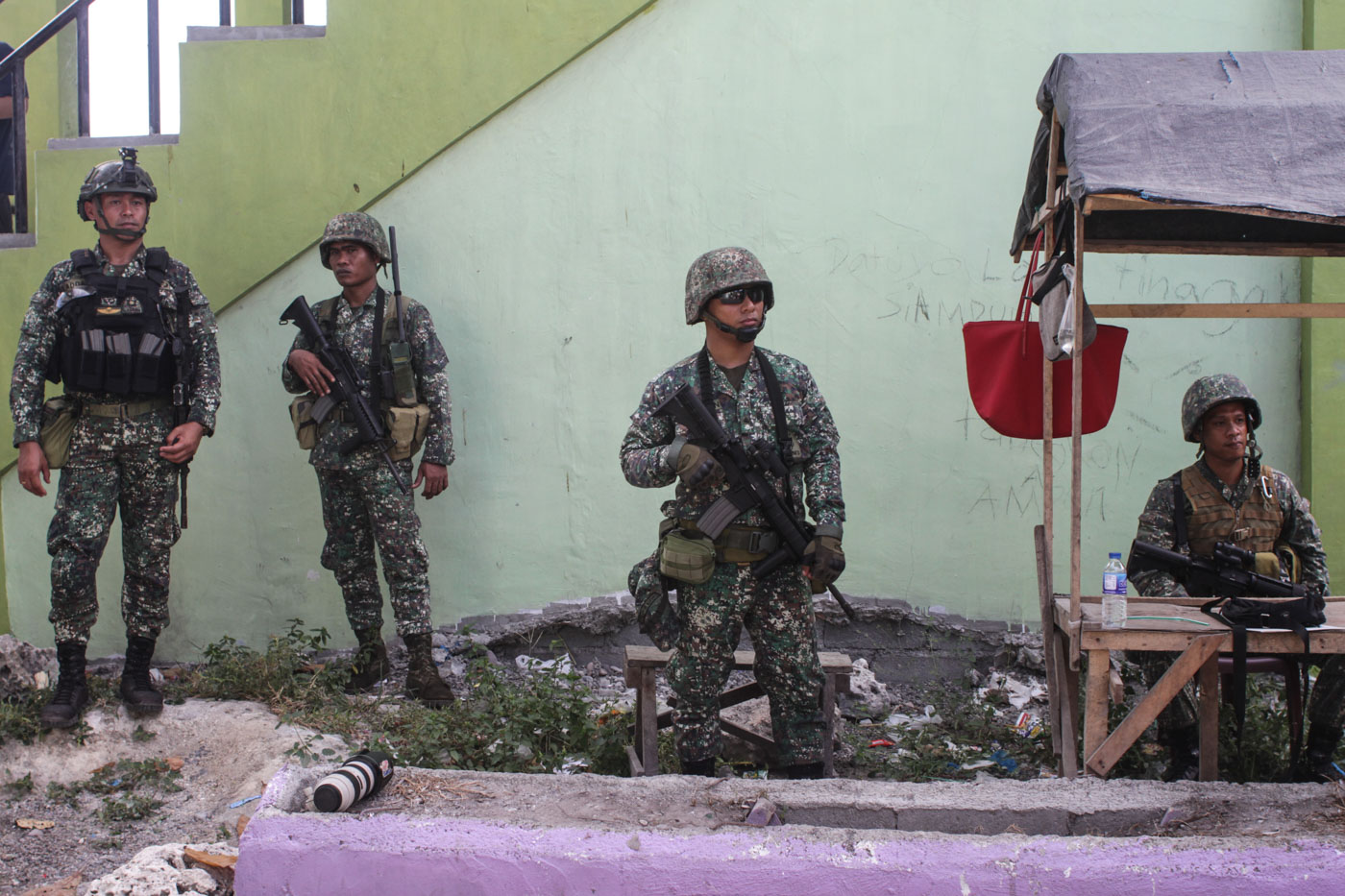 MANILA, Philippines – The woman who self-detonated as she tried to attack a military checkpoint in Indanan, Sulu, on Sunday, September 8, was from a pro-Islamic State (ISIS) faction of the Abu Sayyaf Group (ASG), said the region’s military commander.

“For sure, she was with the group of [Hatib Hajan] Sawadjaan, because only Sawadjaan maintains bombers among the sub-leaders under Radullan Sahiron, who is the overall head of the ASG in Sulu,” Armed Forces of the Philippines (AFP) Western Mindanao Command (Westmincom) chief Lieutenant General Cirilito Sobejana said in a mix of English and Filipino on Monday, September 9.

Sawadjaan is “ISIS-inclined,” Sobejana added, but is somehow held back by Sahiron, who “does not want ISIS to prevail over their organization.”

Sawadjaan has earlier been described as the “head of ISIS in the Philippines” by Interior Secretary Eduardo Año.

On Sunday at around 4pm, the “Caucasian-looking” female attacker was spotted walking from the Philippine Army 35th Infantry Battalion’s Kilometer 4 detachment to the next checkpoint, Kilometer 3, in Barangay Kajatian, Indanan, Sulu.

She was wearing an abaya, the long, flowing traditional garb of Muslim women. Witnesses who saw her had thought she was pregnant because of a bulge on her torso.

As she approached the Kilometer 3 detachment, the soldier on guard duty told her to halt but she kept walking slowly. It then became obvious that she had a bomb strapped to her body, Sobejana said.

(The way she walked, she seemed confused, as though uneasy, and she was alone. You really could observe that she was moving very unusually.)

The soldier called out to her, “Huwag kang lumapit (Don’t come near)!” But the attacker kept on walking, so the soldier shouted to alert the other members of the detachment that there was a “suicide bomber,” said Sobejana.

At this, all the soldiers went behind a bomb-proof barricade and dropped to the ground.

The attacker then cried “Allahu Akbar!” and blew herself up.

“She was holding the trigger mechanism, so we really can say that it was a suicide bombing,” Sobejana added.

He clarified an earlier statement that a severed hand recovered from the scene appeared to be from a man. It was a woman’s, investigators found after taking a closer look.

Lessons learned from 3 earlier alleged suicide bombing incidents paid off, the Westmincom chief said, because no other person was killed except the attacker.

Meanwhile, the suicide bomber has been hailed as an “ISIS martyr” in jihadist social media circles, said Sobejana.

The Army’s Kilometer 3 detachment secures Jolo town proper, which could be the reason the attacker targeted it, Sobejana said.

The fact that she was alone could be a sign that the ASG has weakened, because it might mean the group was trying harder not to be conspicuous.

(They do not have popular support anymore. No support from the community. In fact, our Tausug brothers and sisters are furious at what these terrorist groups are doing. With the loss of popular support, their maneuver space has been reduced. That’s why if you look at it, before it was in pairs. Now, it was just one [attacker].)

On January 27, an Indonesian couple self-detonated during Sunday mass at a Catholic cathedral in Jolo, killing at least 23 people. On June 28, two men blew themselves up as they tried to enter an Army camp in Indanan, killing at least 7. One of the bombers turned out to be a Filipino, the police and military said.

On July 31, 2018, 10 people, including a child, were killed when a van exploded in a military checkpoint in the outskirts of Lamitan, Basilan. The military suspect the driver, believed to be a foreigner, was a suicide bomber.

At the forum, Philippine Institute for Peace, Violence and Terrorism Research chairman Rommel Banlaoi warned that terrorism is an evolving threat that will linger in the Philippines for the foreseeable future.

Jihadist groups in Mindanao will find ways to recruit members and gain firepower, Banlaoi added, and they will want to target Metro Manila.

“They will still continue to mount violent incidents. And this is the current trend right now, the future direction of terrorists will be more and more carrying out suicide terrorism,” he said.

Factions of the Bangsamoro Islamic Freedom Fighters may form a “tactical alliance” with the New People’s Army in central Mindanao, if only to launch stronger attacks on government forces, he added.

Sobejana acknowledged the possibility of a “tactical alliance” between jihadist and communist insurgents, but he said none has been “consummated” so far, and any cooperation between the two groups would be “temporary,” resulting from government troops pressing either side.

The Westmincom chief did admit that 7 foreign terrorists with suspected links to ISIS are still at large in western Mindanao, while 60 others may be operating in central Mindanao.

The military hopes to contain the threat from these suspected terrorists within these areas, Sobejana said.

Mindanao has remained under martial law ever since the siege of Marawi City by the pro-ISIS Maute terror group from May to October of 2017, which killed more than 1,000 people. – Rappler.com