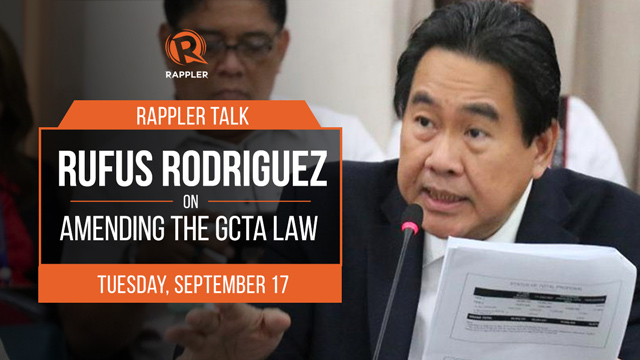 MANILA, Philippines – Six years since the passage of the legislation allowing the early release of well-behaved inmates, controversial loopholes have emerged in the Good Conduct Time Allowance (GCTA) law.

At the heart of the debate among lawmakers and lawyers is whether or not persons charged with heinous crimes should be excluded from availing of GCTA.

But the feisty congressman also said President Rodrigo Duterte’s word is not enough to force the surrender or arrest of convicts who were already freed under the GCTA law. (READ: Warrants needed to rearrest freed convicts – GCTA law author)

What amendments does Rodriguez propose to fix the gaps in the GCTA law? Watch his interview with Rappler at 3 pm on Tuesday, September 17. – Rappler.com