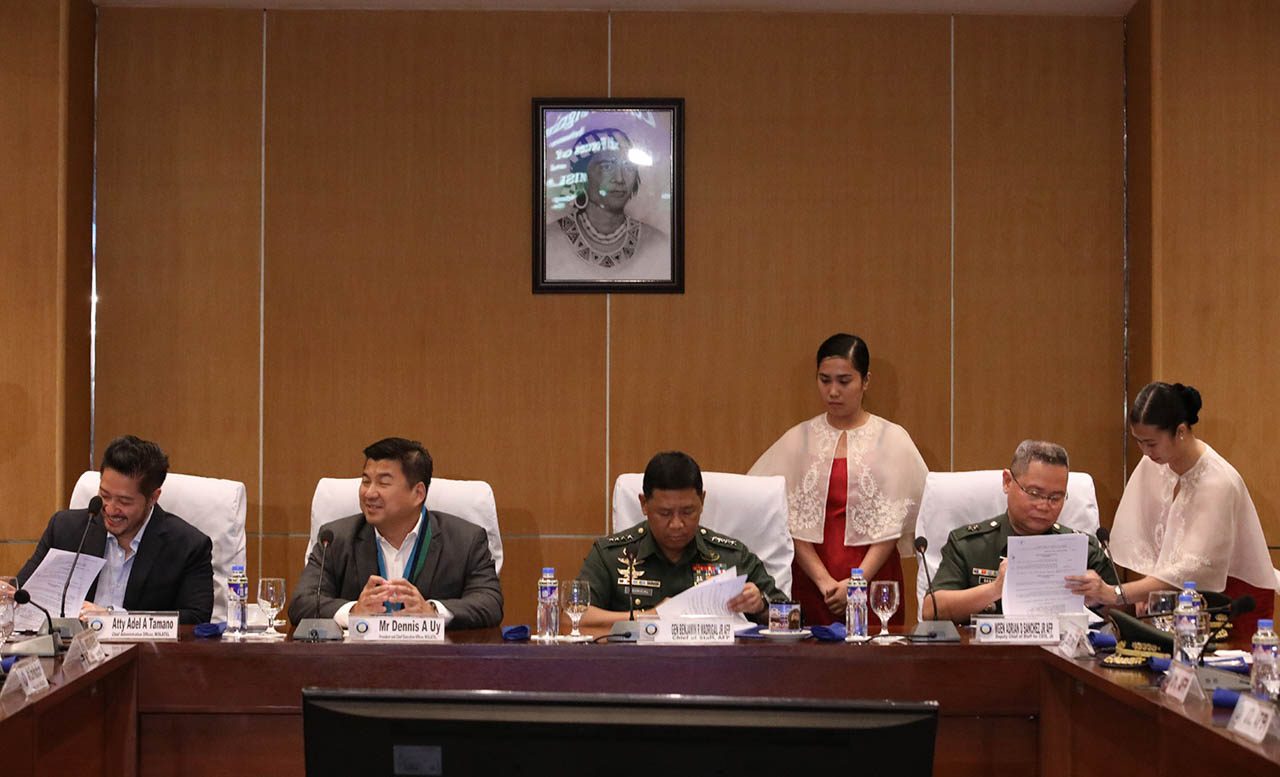 Facebook Twitter Copy URL
Copied
The defense chief says he was unaware of the deal to let Dito Telecommunity (formerly Mislatel) build facilities in military camps, and will check it before giving his approval

MANILA, Philippines – Defense Secretary Delfin Lorenzana said on Monday, September 16, that he would scrutinize a deal allowing a China-backed telecommunications company to build facilities in Philippine military camps – before approving it.

The Armed Forces of the Philippines (AFP) on September 11 signed a memorandum of agreement (MOA) with Dito Telecommunity (formerly Mislatel), the country’s third major telco player that includes the Chinese government-controlled China Telecom in a consortium.

The deal raised concerns over the possibility of Chinese espionage using the AFP’s communication lines and within its own premises.

“I [was] traveling kasi when this came out. When I inquired, the Chief of Staff of the AFP said the MOA [was] going to my office for my approval. So now I am aware of it and I will scrutinize it carefully before giving my approval,” Lorenzana said in a message to reporters on Monday, September 16.

Lorenzana is out of the country and said he would be back in Manila on Friday, September 20. He’s traveling to the US and Europe.

Earlier on Monday, Presidential Spokesperson Salvador Panelo said Lorenzana told him he was unaware of the deal between the AFP and Dito Telecommunity, and that he would investigate the matter.

Senator Francis Pangilinan earlier questioned the deal and warned that Chinese companies such as China Telecom are mandated to gather and provide intelligence – or to spy – for the Chinese government.

The opposition senator added that the Philippines’ security and foreign polices “have become so absurd,” pointing out that Lorenzana himself earlier flagged the threat of espionage from Chinese-dominated Philippine online gaming operator (POGO) hubs near military camps.

At the plenary hearing for the Department of National Defense’s (DND) 2020 budget at the House of Representatives on Monday, Gabriela party-list Representative Arlene Brosas asked security officials to “say outright” what would be the deal’s national security implications.

Muntinlupa City Representative Rufino Biazon, sponsor of the DND budget, responded on the agency’s behalf, saying the DND and AFP “are the experts,” and they found no threat from the arrangement with Dito Telecommunity.

The third telco would only “co-locate” its equipment with those of Globe Telecom and Smart Communications on existing towers, Biazon said, adding that no new communication towers would be constructed.

The telco facilities would be limited to reflectors and relay stations atop mountains on military reservations, not necessarily camps, AFP public affairs chief Colonel Noel Detoyato told reporters in a separate interview on Monday.

AFP Spokesperson Brigadier General Edgard Arevalo said as much when he defended the deal in yet another interview on Monday, saying there was “no cause for concern.”

At the congressional budget hearing, Biazon emphasized that the deal was not yet final, and that it still needed Lorenzana’s approval.

Capping off her round of questions, Brosas asked, “Just to be clear, kanino po ba ang loyalty ng DND at AFP (who holds the loyalty of the DND and the AFP)?”

Biazon responded for the security establishment: “The loyalty of the DND and the AFP is with the Filipino people, I think there is no doubt about that.”

Satisfied, Brosas thanked Biazon, then added, “We cannot use our resources to aid China in its colonization of the Philippines.” – Rappler.com