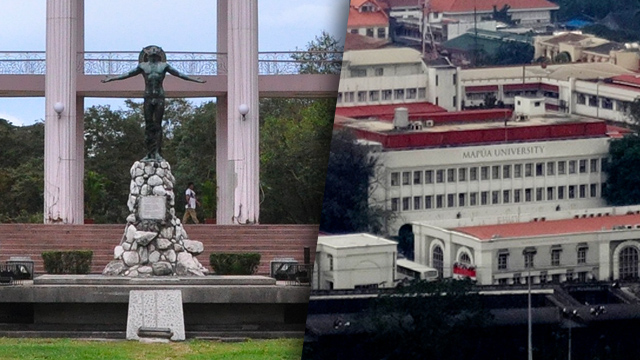 MANILA, Philippines – Student councils of the University of the Philippines (UP) Diliman and Mapua University have adopted a resolution seeking to ban the Marcoses from their school grounds.

“Be it further resolved, that the said Marcoses be denied entry to said educational institutions, as they post a threat to students’ democratic involvement and participation in civic, social, and political affairs,” the resolution said.

The anti-Marcos resolution came ahead of the anniversary of the declaration of martial law under the late dictator Ferdinand Marcos, the family patriarch, on September 21. (READ: Martial Law, the dark chapter in Philippine history)

“Be it finally resolved, that NCR [National Capital Region] student councils and school administrators shall work collaboratively to create and support initiatives and calls in condemnation of the Marcos and Duterte regime,” the resolution read.

On Wednesday, September 18, the senator had said that she hoped UP would be fair in teaching a course on the Martial Law regime by letting their family air their side too.

n a report by the Philippine Daily Inquirer, Akbayan Youth secretary-general Justine Balane said there are ongoing talks for the student councils of the Ateneo de Manila University, the Pamantasang Lungsod ng Maynila, and the Polytechnic University of the Philippines to adopt the resolution.

‘How about the others?’

“The challenge here when a certain public official is specially targetted for some crimes committed [versus] the republic is that the list does not nor should stop there,” Carlos said.

Carlos, who clarified that her post was not a “defense” of the Marcos family, posed this question, “How about those leaders who have also committed heinous acts of corruption and other crimes who may not have been documented as finely as this family?”

“How many, many more stories of other officials have not been documented and how many have hidden under the cloak of ‘heroism’ but have actually committed equally heinous crimes against the republic?” Carlos added.

She questioned whether the move by the university student councils would count as an “acceptable action.”

Ferdinand Marcos’ Martial Law regime was marked by killings, torture, disappearances, media oppression, and corruption that has left the Philippine economy reeling to this day.

In 2018, UP students and faculty members decried the appearance of Senator Imee Marcos at a Kabataang Barangay reunion inside the Diliman campus. Students were also outraged by the presence of UP President Danilo Concepcion at the event.

Some groups also wanted the senator to be declared persona non grata after attending an event in Cebu late 2018, where she said that it’s “her right” to visit the city thanks to democracy.

The same backlash also happened over Irene Marcos’ attendance at an Ateneo event in April this year, which led to the resignation of an official. – Rappler.com