Locsin: U.N. ‘not free to interfere’ when a country goes tough vs crime 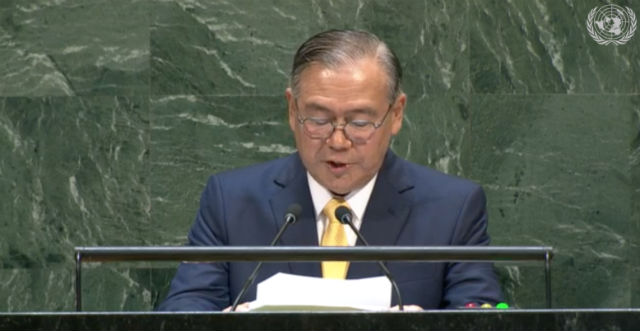 MANILA, Philippines – Philippine Foreign Affairs Secretary Teodoro “Teddyboy” Locsin Jr said the United Nations is “not free to interfere” when a state chooses to take a hardline stance against crime.

Locsin did not mince words as he addressed the 74th Session of the UN General Assembly on Saturday, September 28 (Sunday, September 29, Manila time).

“Still, we are warned of states’ eroding multilateralism, by each one asserting too much sovereignty. But in what respect? Perhaps by insisting on carrying out a state’s defining duty to protect its population against harm by any means sufficient to achieve that purpose,” said Locsin.

“Civil society is free to complain. Better yet, they should run for public office to gain legitimacy to be able to do something about it. But the UN is not free to interfere with the state in its defining function of protecting its citizens and stamping out threats,” added the Department of Foreign Affairs (DFA) chief.

Facing other leaders and diplomats from UN member-states, Locsin then urged world leaders not to allow the UN to be used as a tool against their efforts to curb crime in their respective countries.

“The nations here in United [Nations] should not let this platform be used to threaten others with accountability for taking a tough approach to crime,” said the DFA secretary.

President Rodrigo Duterte has long been criticized for waging a bloody war against illegal drugs.

More than 6,000 people have been killed in police anti-drug operations, but human rights groups estimate the numbers could reach almost 27,000 to include victims of vigilante-style killings. (READ: The Impunity Series)

Locsin’s speech before the UN came just a week after he downplayed the impact of a Malacañang memo suspending talks for loans and grants from countries that voted in favor of a UN Human Rights Council resolution to review drug war killings in the Philippines.

Proposed by Iceland, the resolution asked UN rights chief Michelle Bachelet to write a comprehensive report on the situation in the Philippines and present it to the council.

Duterte was outraged by the resolution, prompting him to mock Iceland and mulled cutting diplomatic ties with it. – Rappler.com