Malacañang said in a statement that Duterte relayed this to Putin during a bilateral meeting in Sochi, Russia, on Thursday, October 3, the second day of his official visit to that country.

“President Duterte told President Putin the remarkable progress of Philippines-Russia relations after he sought the rebalancing of traditional partnerships and the deepening of relations with non-traditional partners at the onset of his administration,” Presidential Spokesman Salvador Panelo said in a statement on Friday, October 4.

In his opening remarks at the meeting, Duterte spoke about the goal of visit and also how Philippine ties with Russia grew over the last two years, or since his first visit to that country.

“I am here today to reaffirm our strong commitment to build a robust and comprehensive partnership with the Russian Federation. In the past two years, we have seen a dramatic increase in bilateral activities across many areas of cooperation at various levels of government,” Duterte said.

He cited the historic port call of the Philippine Navy vessel BRP Tarlac to Vladivostok, Russia, in October 2018.

“This was highly a political issue and importance given that a few years back this would have been unthinkable,” Duterte told Putin.

The Philippine leader also cited the presence of defense attachés in both countries which, he said, “is an indication of our long-term commitment to elevate our defense relation and I am indeed very pleased with this development.” 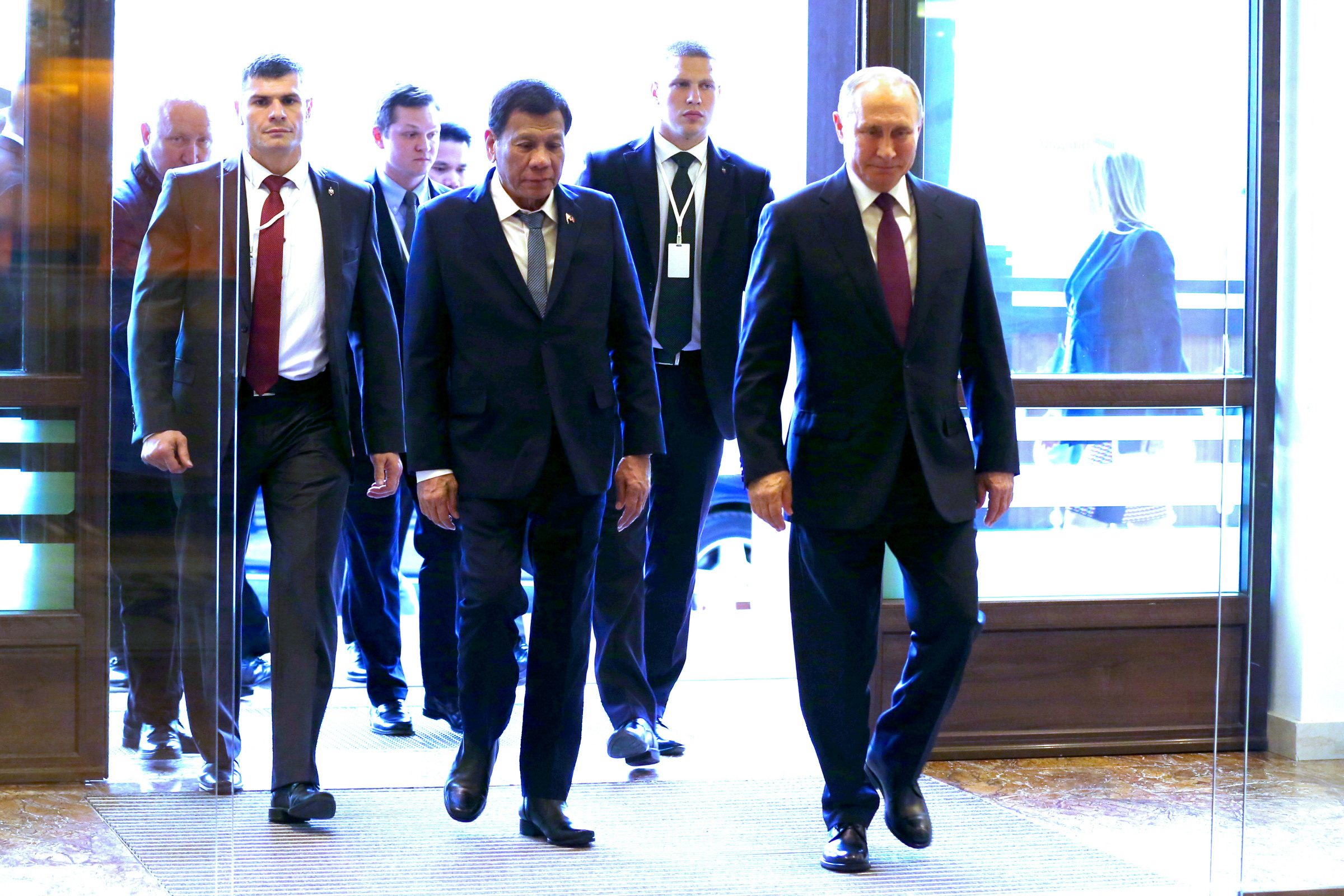 The Russian Navy has also made goodwill visits to the Philippines. Last year, 3 Russian warships docked in Manila as the Philippines held its annual military exercises with the United States, its oldest ally.

In his opening remarks, Putin said that the Philippines “is a very important partner of Russia in Asia,” and noted improvements in bilateral ties since Duterte assumed the presidency.

“We have reached lots of success in our trade and economic cooperation. Last year, our trading has grown two-fold…. And Russian export also grew four-fold. We have major reserves in place and Russian companies are ready to increase the supplies of energy carriers, aircraft, transport, special equipment,” Putin said.

He said Russia is eyeing increased “industrial cooperation” and also cooperation on “the exploration of space and the use of digital technologies.”

Putin also said that since Duterte’s visit to Russia, the Philippine leader “managed to lower the level of terrorist threat in your country and to strengthen the potential of your security bodies.”

“We are prepared to develop our partnership when it comes to countering terrorism and share our experience and all the developments,” he said.

In the first few months of his administration, Duterte announced an “independent foreign policy” that would steer the Philippines away from its traditional allies like the US, to forge stronger ties with countries like China and Russia. Experts have questioned this policy in light of Duterte’s inaction on China’s continued incursions in the West Philippine Sea.

The October 3 meeting in Sochi was Duterte’s 4th with Putin, who the Philippine chief had called his “idol” and “favorite leader.”  They first met on the sidelines of the Asia-Pacific Economic Cooperation (APEC) Summit in Lima, Peru in November 2016. (READ: Duterte on Putin: We’ve become fast friends)

During their first meeting in 2016, Putin invited Duterte to visit Russia, which the Philippine leader did the following year. But Duterte had to cut short that first trip following the eruption of the Marawi siege.

Duterte and his official delegation arrived in Moscow on Wednesday, October 1, for his second visit to the country. (READ: Duterte’s Russia activities: Speeches at think tank forum, institute for Russian diplomats) – Rappler.com