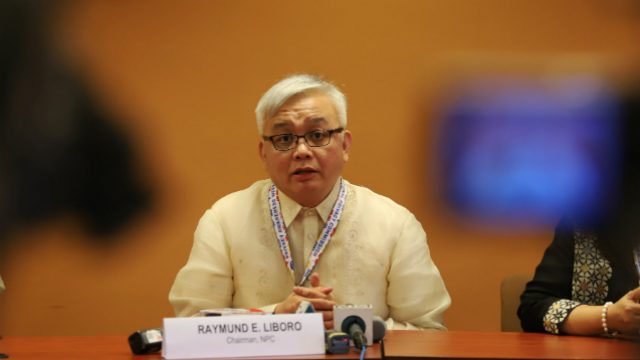 MANILA, Philippines (UPDATED) – An anonymous complainant filed a complaint against Privacy Commissioner Raymund Liboro at the Civil Service Commission (CSC) over alleged procurement irregularities and bullying to some employees.

In a 9-page complaint dated August 26, the employee said he wrote “on behalf of the many employees” of the National Privacy Commission (NPC) who experienced the same treatment from Liboro.

“In the past, we let such abusive behavior slip. Had we corrected this abusive behavior then we might not find ourselves in this predicament to the detriment of the Filipino people,” the anonymous complainant wrote.

The complaint detailed the alleged irregularities at the NPC from the time Liboro assumed office in 2016 up to the present.

According to the complaint, the CSC had already ruled in 2018 on the powers of the officials of the NPC, and yet Liboro continued to “act by himself,” except for privacy cases that needs to be decided with the deputy commissioners.

“To this day, Commissioner Liboro continues to treat rules and regulations not emanating from his office – such as civil service rules and directives from the Civil Service Commission and the Commission on Audit – as mandatory only when convenient,” the employee said.

“Even more alarmingly, he ignores the law on procurement whenever it benefits him,” he added.

Rappler reached out to Liboro. He refused to comment on the matter.

According to the complaint, Liboro would be on numerous official trips and extend his stay in these countries, “making it appear that an official trip is several days longer than the actual event.”

According to documents provided to Rappler, Liboro went on 10 official trips in 9 countries from 2017 to 2019. Oftentimes, he extended the travel outside the main dates of events and scheduled meetings.

There were two trips – in Europe and in New Zealand – where Liboro was away for 9 days, even when the actual event was only for two days. The rest of his trips would span from 8 to 3 days.

On official trips, government officials receive a daily subsistence allowance (DSA) based on the rates prescribed by the United Nations Development Program per country, and a representation allowance of $1,000, which should be used for meetings.

While the representation allowance is subject to liquidation, the DSA is not. That means that the longer an official extends his trip, the higher DSA is being given by the government.

The complainant also said that the official trips would be used as a “reward for employee loyalty.” Those who are under Liboro’s ire would not be allowed to join some of these trips.

“Together with his extensive trips abroad, the slowdown in services to people is palpable. To make matters worse, he will look toward other lower-ranking officers as the source of his violation of the Anti-Red Tape Act, without looking at himself,” the complainant wrote.

As of September 27, privacy complaints at the NPC have reached about 2,000 since 2016. Of the figure, only 35% were closed, 34% are being investigated, while the rest have yet to be acted upon. This does not include thousands more complaints on online lending issues.

In its 2018 report, the Commission on Audit (COA) had flagged “significant delays” in its ICT Data Center, resulting to the delayed delivery and installation of procured equipment. The NPC explained that the detailed floor plan of the site were “revised for at least 5 times.”

“Because of Commissioner Liboro’s insistence on approving everything, the delivery of services to people are delayed,” the complainant said.

The complainant also detained numerous instances where Liboro had allegedly mistreated employees – some being threatened of administrative cases – leading to the high turnover rate of the commission.

Sometime in 2017, Liboro purportedly ordered to “find material on the deputy commissioners in order to remove them from office,” the complainant wrote. After the incident, 6 officials, half of the policy review division, and half of the public information office – or about one third of the NPC – had resigned.

In May 2019, the complainant said that some NPC officials were placed on “floating status,” as Liboro requested for special power to reassign officials from the Commission on Elections.

Come July 2019, two more high ranking officials left the NPC. These officials were the subject of Liboro’s ire. According to the complainant, Liboro allegedly ordered another official, under the threat of administrative action, to make a memorandum pinning the two as the cause of delay in the issuance of a certification closing a privacy case.

Because of the high turnover rate within the commission’s infant years, the NPC’s human resources office in August has issued a memorandum saying that the problem continues to be “unabated”.

In closing, the complainant said that he is writing in anonymity out of fear from “undue retribution”.

“We only wish to serve the Filipino public to the best extent of our ability, with integrity and honesty. I only wish that we could come forward and sign this letter, but his control of the bully pulpit and the instruments of power ensure we cannot do so without undue retribution,” the complainant said.

Liboro is the first privacy commissioner, when former President Benigno Aquino III signed the Data Privacy law that created the NPC. His term expired in March 2019, but continues to hold office in a holdover capacity.

Since he took office, there had been 3 complaints filed against him at the CSC.

The first one was in May 2017 when a member of the privacy policy office wrote to the CSC over bullying. The complainant resigned not long after she filed the complaint.

Another anonymous complaint against the privacy chief was brought to the attention of the CSC in August 2017. It was about the promotion of an executive assistant to be the acting chief of data security and technology standards division, with the employee questioning the ethics and the legality behind the decision. – Rappler.com