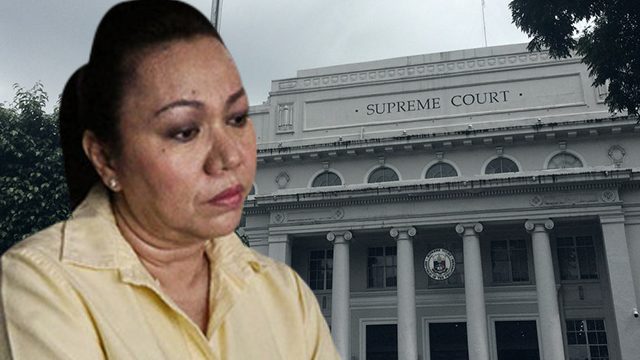 MANILA, Philippines – Janet Lim Napoles has filed a petition before the Supreme Court asking for a temporary restraining order (TRO) to stop her plunder trial at the anti-graft court Sandiganbayan.

This is related to the P183-million pork barrel scam plunder case of former senator Jinggoy Estrada, which is now at the stage of the defense presentation.

Napoles and Estrada were granted the leave of court to file a demurrer of evidence, or a pleading that seeks the outright dismissal of a case on basis only of weak prosecution evidence.

But months later, the Sandiganbayan 5th Division denied their demurrers, moving the case to a defense presentation.

Napoles’ petition before the High Court, filed on October 3, seeks to stop the Sandiganbayan proceedings.

Napoles is following in the footsteps of former president Gloria Macapagal Arroyo, who, after her demurrer was denied by the Sandiganbayan, ran to the Supreme Court where she scored her victory and freedom.

In her petition, Napoles largely relied on the SC’s acquittal of Arroyo, a ponencia by Chief Justice Lucas Bersamin that introduced the element of a main plunderer. It is also the decision that helped Estrada obtain a bail grant from the same division.

Napoles said the 5th Division acted with grave abuse of discretion when it denied her and Estrada’s demurrers.

Explaining that the SC only introduced the main plunderer doctrine  in 2016, Napoles said there was no way that the charges filed against her in 2014 could have identified a main plunderer.

“Petitioner adamantly holds the position that the Information in this case failed to expressly identify Estrada as the mastermind or main plunderer,” said Napoles.

She also used the Sandiganbayan 1st Division’s acquittal of Bong Revilla. In that decision, a majority of 3 justices in the 1st Division said there was no direct evidence that Revilla really did receive the kickbacks as claimed Richard Cambe.

Cambe and Napoles were the ones convicted in that case.

Napoles said that in the Estrada case, there was also no direct evidence that Estrada received kickbacks.

“Clearly, therefore, the assailed Resolutions, with due respect, are wrong in saying that the lack of evidence of receipt of accused Estrada of the alleged commissions and kickbacks is immaterial to prove the crime of plunder,“ said Napoles.

Estrada tried this route before in the High Court, but he lost in a narrow 6-4-4 decision when the SC upheld the Ombudsman’s indictment against him. – Rappler.com