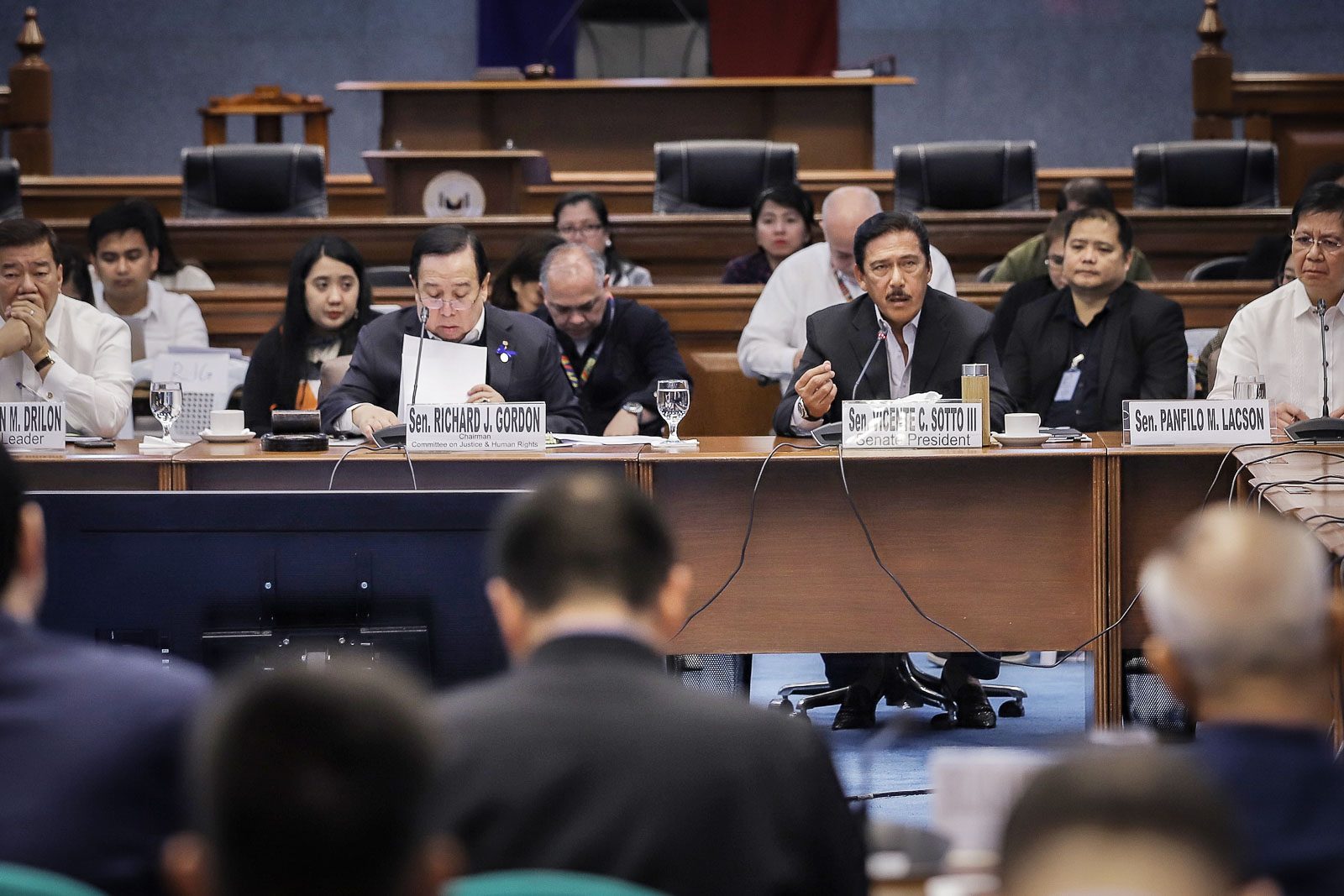 MANILA, Philippines – Senate President Vicente Sotto III on Wednesday, October 9, opened the Senate blue ribbon hearing with a statement that he hoped would finally “clear the air” on why the probe had evolved from the good conduct time allowance law to rogue cops involved in recycling seized illegal drugs.

Sotto said the “few executive officials who have been wondering” why the Senate was now tackling the drug recycling controversy at the Philippine National Police (PNP) were apparently not monitoring the hearings, and more importantly, not properly informed on Senate rules. (READ: ‘Spectacle of a grand cover-up’: Senate hearing bares how ‘ninja cops’ remain in service)

“For those not familiar with the Senate rules, my message is, ‘Zip it,'” the Senate President said.

Though he did not identify the officials, the message was apparently intended for Presidential Spokesperson Salvador Panelo who recently questioned the motive behind the Senate hearing on the drug recycling probe. Panelo had claimed that the investigation had become “politicized” as it “makes it appear” that the Duterte administration was failing the drug war.

Initially responding to Panelo’s questions about the Senate hearing on Saturday, October 5, Sotto stressed that the ongoing probe was the natural outcome of the hearings into the GCTA law and illegal drugs at the Bureau of Corrections that happened during the previous administration.

Sotto reiterated this position on Wednesday, but did not refer to Panelo or any other Palace official.

“We just want to clear the air that this has been turned into a political scenario. Definitely, you are completely wrong when you say that. The events that transpired in 2013 have nothing to do with the present administration. It has nothing do about the present drug war,” Sotto said.

Aside from reiterating that the ninja cops issue was the product of the marathon hearings on the issues hounding the BuCor, Sotto gave a crash course on Senate rules that allow the Senate blue ribbon committee to shift to the drug recycling probe without need for a resolution or a privilege speech.

He said the Senate blue ribbon committee is the only Senate panel with motu propio powers, authorizing it to conduct an investigation into any matter involving public officials.

Gordon chimed in, saying nobody “should be making statements haphazardly,” and hoped that the officials involved heard them.

“We are supportive of President Duterte’s drug war. This has nothing to do with the drug war,” Gordon said.

The issue of drug recycling among cops was revived during the September 16 budget hearing of the Philippine Drug Enforcement Agency when its chief Aaron Aquino, in response to senators’ questions, confirmed that the act persisted to this day, even with the Duterte administration’s war on drugs.

The issue on the ninja cops surfaced on September 19, when retired policeman and now Baguio City Mayor Benjamin Magalong bared in an executive session the involvement of the 13 Pampanga cops in an anomalous buybust operation in 2013. Magalong said it was among the examples of drug recycling. – Rappler.com