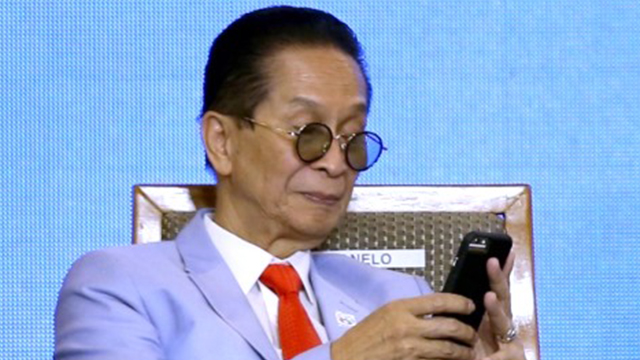 MANILA, Philippines – Malacañang has no problem with the harassment and threats lobbed by Duterte supporters against Skimmers, the University of the Philippines Visayas student group behind a viral cheer critical of the government.

Presidential Spokesman Salvador Panelo on Monday, October 21, said it was “very natural” for pro-Duterte netizens to harass members of the University of the Philippines Visayas student group.

(Of course, that’s a natural reaction because, to them, they aren’t joking.)

“That’s [a] very natural reaction for supporters of the President,” said Panelo.

Asked if the Palace would at ask the most aggressive supporters to lay off the students and faculty members involved with the controversial cheer, Panelo said there would be no such intervention.

“It’s a free country. As I said, they can react too,” said the Duterte spokesman.

What does Palace think of the cheer? But Panelo also defended the right of the Skimmers to criticize the President through their cheer dance performance.

“It’s a free country, they can dish out jokes, criticisms,” he said.

He also believes the portion of the cheer that mentioned “killing Duterte” followed by a humorous “charot!” was just a joke. He pointed out that even Duterte has made “jokes” about killing people.

(It was just a joke anyway. The President also uses the word ‘kill.’)

Harassment. The UP community and various groups have condemned harassment, cyberbullying, threats, and red-tagging by rabid Duterte supporters against the students and faculty members behind the cheering routine.

The University of the Philippines Visayas said it values critical thinking and freedom of expression among students and vowed to protect members of the Skimmers in their campus.

The UPV University Student Council also stood by the group.

The hashtage #HandsOffSkimmers also trended on Twitter on Saturday, October 19, as netizens stood in solidarity with Skimmers, commending their courage for putting a spotlight on issues the country is currently facing.

For years, the annual UP Visayas cheering competition has served as a creative protest where students can tackle social and political issues from the university administration level all the way to national and global scales. – Rappler.com