Q&A: Is General Sobejana the one to end the Abu Sayyaf? 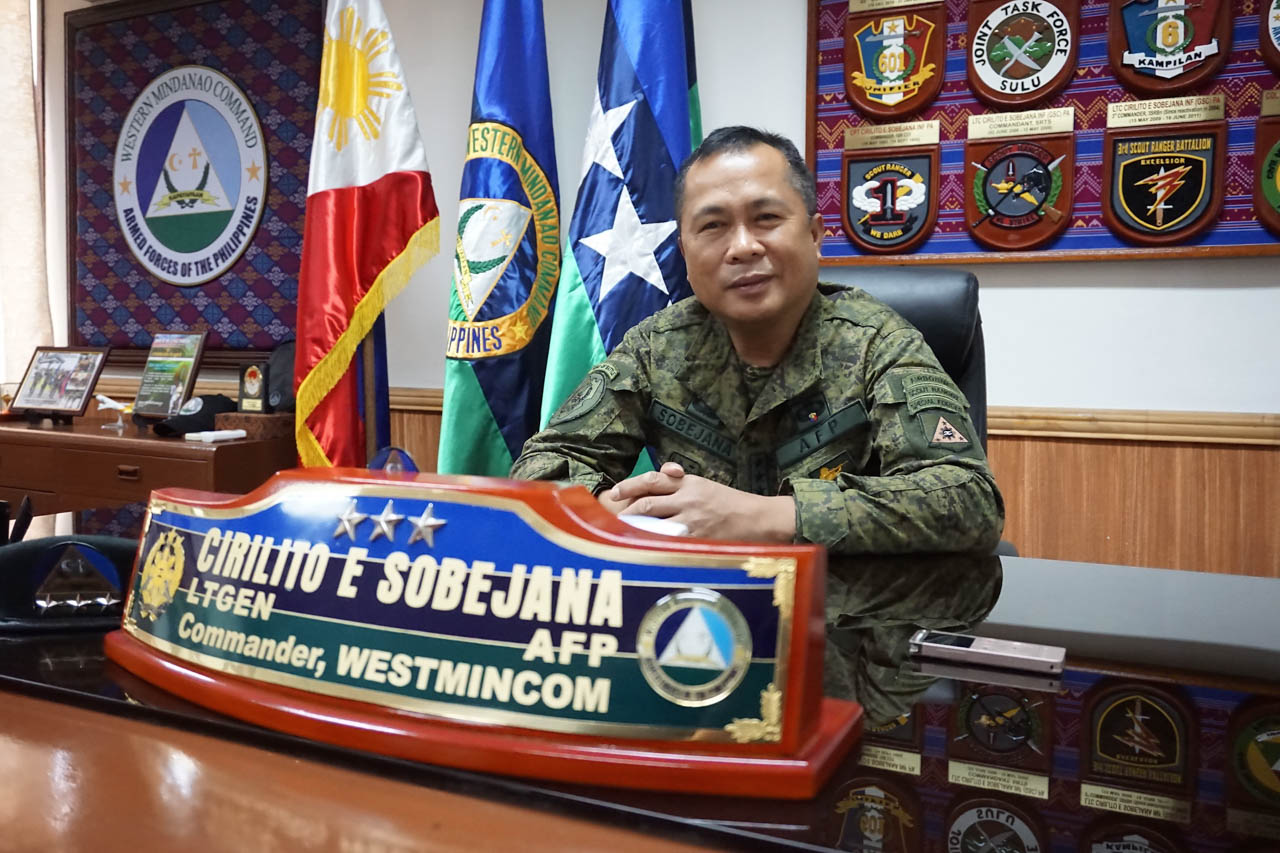 MANILA, Philippines – Lieutenant General Cirilito Sobejana has been fighting the Abu Sayyaf Group since he was a young officer in Basilan in the ’90s. Now chief of the military’s Western Mindanao Command (Westmincom), he is determined to end the armed group that has been a menace to the region for decades.

Will he succeed where others failed?

Here are excerpts from a recent interview with the general by Rappler contributor Carmela Fonbuena.

What is the biggest security threat in Western Mindanao?

We have all kinds of threats. You name it, we have it. We have the communist terrorist group, the Bangsamoro Islamic Freedom Fighters in Central Mindanao, the Maute and the Dawlah Islamiyah-inspired group in Marawi and some parts of Lanao Del Sur, and the Abu Sayyaf Group in the island provinces. Among these threats, the Abu Sayyaf Group is the biggest threat because they are involved in kidnapping activities.

Is the Abu Sayyaf Group the biggest threat because of its kidnapping activities, not due to its links to the Islamic State (ISIS)?

They have a new victim recently, a couple. They were not actually the ones doing the abduction, But what happens is that the victims are given to them. Kapag nasa kanila na, they demand ransom. It became a cottage industry on their part. With the ransom that they get, they can sustain their operations.

Lately, Islamic State elements managed to enter the country and made connections with local terror groups such as the Abu Sayyaf. But not everybody in the Abu Sayyaf Group accepted the ideology brought by the Islamic State. Hajan Sawadjaan is inclined but Radullan Sahiron, as we learned, is against it. They are divided. There is struggle from within. But we do not treat them separately. We are treating them as one.

Is the Maute Group still a threat?

We have put a conclusion to the Marawi problem. The Maute Group is almost non-existent now. There are a few remnants, but some of them are returning to the fold of the law. The death of Abu Dar created a leadership vacuum in their organization. In due time, the Maute Group will disappear.

How do you describe the current threat from the Islamic State-linked groups?

Their strength is dwindling and the people are now realizing that their existence does not offer any good to them. It hampers development. With the aggressive efforts of the government and the civilian sector, we are transforming the region into a better place for investors.

How about the new threat coming from suicide bombers?

Suicide bombing came about because of the presence of ISIS-inclined international terror elements. To some extent they were able to motivate people, and there was even a Filipino bomber that exploded himself. With our relentless focused military operations, some of them are getting away from the area. As we speak, I think they are already disorganized into small groups.

We were able to account for 5 [suicide bombers] in the entire Westmincom area. They are all in Sulu. It’s a mix of local and foreign [bombers]. Three had already exploded themselves. We neutralized another one during one of our armed engagements against the group. We are still looking for one more.

The military is able to identify who they are?

Yes. Because of our intensified intelligence operations, we were able to uncover this information. These are the ones who were trained [to do suicide bomgbings]. They were not only trained in skills, they were motivated to do this. There’s brainwashing.

How many foreign fighters remain?

We confirmed 7 foreign fighters, but there are 60 others who are under validation. We captured one Swedish national of Turkish descent in Sultan Kudarat, which makes [the total] 8. He was not part of the 7 before.

They are already here. We are validating if they are [here to join the local armed groups]. We are not so sure of it. Our operatives are watching them closely. The Swedish national was in the list of the 60 we have been validating. We got him as soon as we confirmed it. The same thing will happen to the others if we confirm they are part of the terror group.

Are there more foreign fighters coming to the country?

I don’t think so. With our TCA (Trilateral Cooperation Agreement) with our neighboring countries, we are able to closely guard the southwestern frontier. Other area commands are doing their part. The immigration bureau is also closely watching the entry of foreign nationals.

Abu Sayyaf has been a menace for decades. Why can’t the military get rid of the group?

I should say that we are gaining ground significantly. The Abu Sayyaf Group started in Basilan. We were deployed in Basilan, where I was wounded in 1995. When the original leader Abubakar Janjalani got killed in 1998, his brother took over. They shifted their operations to Sulu. Basilan is now generally peaceful. There are a lot of economic activities. The local government is very active in our [counter-terrorism] programs. Delivery of basic services is being done. When I was here 30 years ago, the situation was very different. Tourists can now go to Basilan. Before we cannot do that.

Sulu is now attractive to investors. I just went there with foreign investors for natural gas and oil extraction. We can always dedicate units to secure these investments. We brought them there to build their confidence. They saw that there are pockets of areas where we can start the development.

You want to bring in investors even when the Abu Sayyaf threat is not over?

If we will not let these investors come in, hindi matatapos itong guerra (The war will not end). We need to provide employment. Terrorism cannot be solved through military actions alone. The Armed Forces of the Philippines cannot provide employment.

As we let people go back to the fold of the law, if you abandon them without a good program for them economically, they will [return to the group]. When I was there, there were some surrenderers from the Abu Sayyaf Group. They were telling us that the reason they joined the terror group was due to economic problems. They don’t have any permanent job, they have so many children, and some have more than one wife. The Abu Sayyaf Group offered them money.

We need to be proactive. We need to really introduce economic developments so that everybody will be earning income. If everybody has a house, is able to feed their children, can send their children to school and buy the things they need, I think they cannot think of joining the terror group.

You think the military can finally end the Abu Sayyaf Group?

The soonest possible time, with the convergence of our efforts, I think we will be able to get rid of them. Initially, we have to neutralize their key leaders so that there will be big leadership vacuum. I do believe that the members are just there for survival. Their commitment or their sincerity is not that much compared to their leaders. That’s why when we were able to neutralize Abu Dar in Lanao del Sur, there was a significant reduction in their will to fight, resulting in the surrender of some of their members. We have not monitored anybody trying to or doing something to replace Abu Dar.

I still have two years remaining in my military service. With that amount of time available to me, I will do my best effort especially here in the Bangsamoro region. – Rappler.com