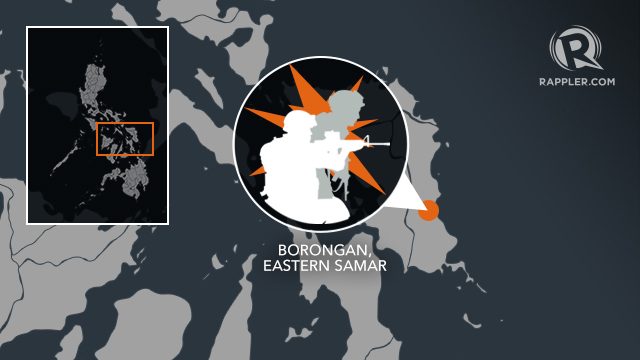 At around 5 pm Monday, 3 platoons of the Army’s 14th Infantry Battalion (IB) acted on a tip from a civilian who said that armed NPA insurgents were extorting money and food from communities in the vicinity of Barangay Pinanag-an, Borongan City.

Six improvised explosive devices (IED) went off “simultaneously” as the soldiers arrived in the mountainous area, followed by a firefight with an estimated 50 guerrillas that lasted about 30 minutes.

Aragones said the IEDs appeared to have been planted beforehand, and the blasts were mainly what killed the 6 government soldiers and wounded 20 others.

The clash left an undetermined number of guerrillas wounded. An initial report of the incident said that a “captured CNT was killed during the encounter.” CNT stands for “communist NPA terrorist,” the military’s term for communist guerrillas.

Aragones asked to withhold information on the casualties because their families have yet to be informed.

President Rodrigo Duterte has ordered the Armed Forces of the Philippines to end the communist insurgency, after unsuccessful attempts at peace negotiations with the National Democratic Front (NDF), the political wing of the Communist Party of the Philippines (CPP) and the NPA.

The Duterte administration has instead pushed for “localized peace talks” through the National Task Force to End Local Communist Armed Conflict (NTF-ELCAC), created in December 2018, to hold negotiations between local government units and local fronts of the communist rebels.

The CPP-NPA-NDF rebellion started in 1969 and is now Asia’s longest-running insurgency. It had about 25,000 guerrillas at its peak in the late 1980s, but its numbers have since dwindled to about 4,000. The fighting between government forces and the rebels have have killed thousands.

The islands of Samar and Negros in the Visayas are among critical areas in the battle between the government and communist guerrillas. On October 26, the military launched “surgical airstrikes” on an alleged NPA encampment in Las Navas, Northern Samar, that caused “heavy casualties” among the guerrillas, the military said.

The Army is still in pursuit of the guerrillas they encountered on Monday, Aragones said on Tuesday. They suspect the presence of an NPA encampment near the site of the battle. – Rappler.com