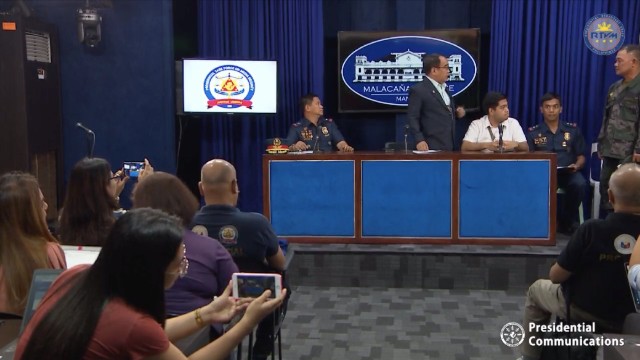 CEBU CITY, Philippines – The cop suspected to be gunman in the murder of Dumaguete City radio broadcaster Dindo Generoso has surrendered to authorities, the Presidential Task Force on Media Security  (PTFoMS) and the Philippine National Police (PNP) announced on Friday, November 15.

“We are proud to announce that Rubio is now in government custody,” Egco, an undersecretary of the Presidential Communications and Operations Office (PCOO), announced at the briefing.

It was previously reported that Rubio was an inactive police officer.

Dumaguete City Police Chief Wilfredo Alarcon said that they believe Rubio is the gunman in the killing of the 67-year-old radio blocktimer. Generoso was attacked on his way to work at dyEM 96.7 Bai Radio, on Thursday morning, November 7.

“We have gathered info identifying Rubio [as the gunman] based on info from the cell phone of the other suspect Teddy Salaw,” Alarcon said in a mix of Filipino and English.

According to Alarcon, the exchange included messages about Rubio’s whereabouts, when he was “on his way” somewhere, but there were no messages which specifically said that the cop was going to kill anyone.

There were also messages exchanged about changing plate numbers, presumably on the motorcycle used in the killing.

Responding to questions, police officials said they were looking into politics as motive for the killing.

Generoso’s radio show slot was sponsored by the Dumaguete City government and would often tackle community development issues.   Police have yet to specify the motive, but ruled out that it was connected to a possible land dispute. They said they would review the content of his recent radio programs to narrow down the motive further.

Two of the suspects were arrested following the attack.

Earlier this week, the Department of Justice (DOJ) issued a lookout bulletin for Tomasino Aledro, another suspect in the killing and an alleged gambling lord, while waiting for the Dumaguete City Prosecutor’s Office to issue a hold departure order against the Aledro.

Generoso is the second radio broadcaster killed in Dumaguete City in more than a year. – Rappler.com