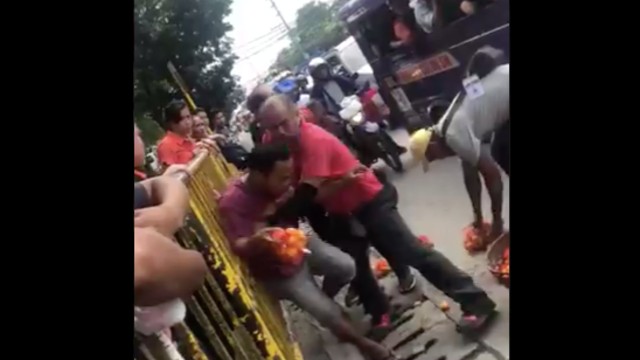 CEBU CITY, Philippines – Cebu City Mayor Edgar Labella ordered a probe into the manhandling of a street vendor that was seen in viral video on Facebook

The video showed 3 members of the city’s PROBE (Prevention, Restoration, Order, Beautification, and Enhancement) team physically restraining and pushing a street vendor near the SM City Cebu in Barangay Mabolo.

“Let this be noted by all Probe team members that although they need to do their job, they should make sure that they are not harming the vendors,” Labella posted on his Facebook page on Friday, November 22. “They have to temper it with compassion. I will never tolerate this kind of incident,” he said.

The city’s PROBE team has been intensifying its operation against ambulant vendors after a memo from the Department of Interior and Local Government (DILG) ordered local government units to clear streets from obstructions.

The city’s PROBE head Racquel Arce apologized for the incident, but explained their side in an ambush interview with reporters on Friday.

“I apologize that it came to that,” Arce said in Cebuano. “They were at their wits end because this was the 3rd time he (the vendor in the video) was told to leave.”

“By the way, that area is included in our road inventory in the DILG [order], 5 vendors were there and starting with that we deployed operatives in the area to sustain – because that was the DILG’s mandate – the clear roads,” she said.

The vendors who left the area by SM City Cebu did not return. However, the one seen in the video being mauled by the law enforcers was accused of being caught 5 times in different parts of the city. He has not been named.

“By Santo Niño [basilica], on Manalili [street], along Carbon, and he was caught two other times by Gaisano main [mall],” the city’s beautification head said.

“Every time he gets caught, I personally conduct a seminar so he would understand our jobs,” she added.

She said that they were just doing their jobs to maintaining clear streets.

According to a report in The Freeman, Vice Mayor Michael Rama said that he was disappointed over the PROBE’s mauling of the street vendor and urged the mayor to be clear on his policy on this matter.

“The council already made a stand. The mayor should be very clear if they can return (selling) or not,” said Rama.

Labella’s legal counsel Rey Gealon said he would head a team that would investigate the conduct of the PROBE personnel.

“We will look into the issue of whether or not proper legal and regulatory procedures were observed by the elements of PROBE in the conduct of that apprehension of the fruit vendor,” said Gealon. – Rappler.com