Nov 24, 2019 7:45 PM PHT
Rappler.com
Facebook Twitter Copy URL
Copied
(3rd UPDATE) Malacañang says this is 'in response to the taunt and dare' of Vice President Leni Robredo for President Rodrigo Duterte 'to just tell her that he wants her out' 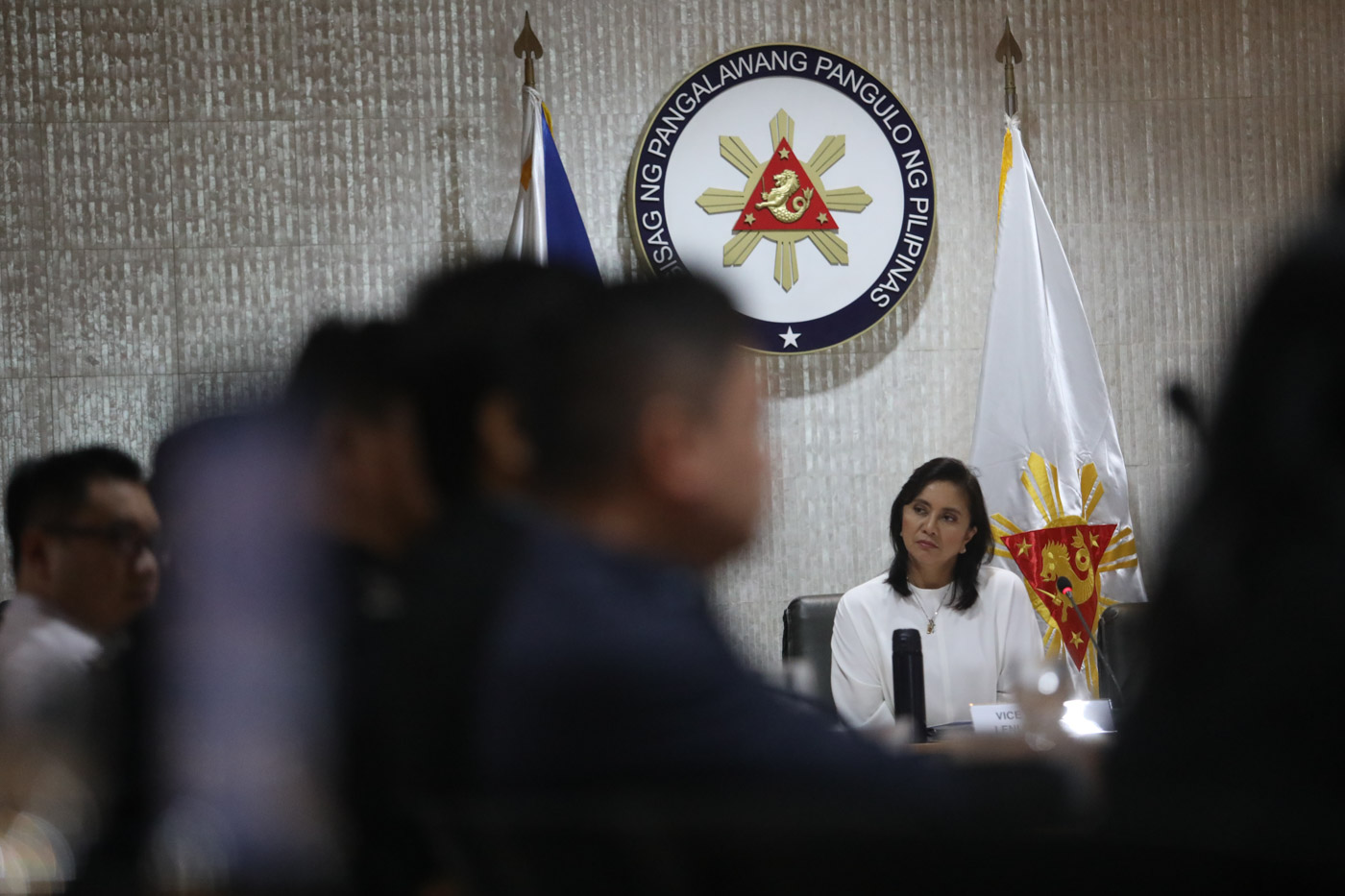 “This is in response to the suggestion of Liberal Party president, Senator Francis Pangilinan, to just fire the Vice President from her post. This is also in response to the taunt and dare of VP Robredo for the President to just tell her that he wants her out,” Panelo said in a statement.

Duterte’s spokesman added that Robredo “wasted” the chance “to make the campaign against illegal drugs better” by using her post “as a platform to attack the methods undertaken by this administration.”

“The President has been more than patient enough, giving the Vice President adequate opportunity to discuss possible courses of action with him…. But she has not presented any new program that she envisioned to implement. In a campaign where people’s lives are at risk, a day is an eternity,” Panelo said.

Robredo’s spokesman Barry Gutierrez told Rappler on Sunday evening that they have yet to receive a formal notice regarding Duterte’s move.

“Panelo, as usual, announced to media without the courtesy of directly informing the Vice President,” Gutierrez said. (READ: Opposition ‘not surprised’ by Robredo’s firing as ICAD co-chair)

Robredo, who accepted the post on November 6, has had to deal with lack of trust from Duterte himself and the President’s men. (READ: The gamble of Leni Robredo)

Duterte earlier said he “cannot trust” Robredo because “she is with the opposition” and he does not “know her.”

He had also threatened to fire her if she aids foreign investigations into his so-called war on drugs, which has left thousands of Filipinos dead.

Duterte’s remarks prompted former president Benigno Aquino III, an ally of Robredo, to ask why the President even appointed the Vice President to the ICAD in the first place.

Robredo also wrote to Duterte, asking him to clarify her mandate as ICAD co-chairperson. The other co-chairperson is Philippine Drug Enforcement Agency (PDEA) Director General Aaron Aquino, who earlier said Robredo would fail if she leads the anti-drug campaign.

The President said the Vice President should check the executive order (EO) that created the anti-drug body, but it does not detail her responsibilities or the extent of her powers. (READ: Stripped of authority, Robredo doomed to fail as anti-drug czar – Lacson)

Panelo maintained on Sunday, however, that the ICAD’s functions are spelled out in EO No. 15.

“If VP Robredo wanted clarification in the scope and limits of her new task, she could have sought audience with the President, which she failed to do. As always, she talked – not with her appointing authority – but right in front of the cameras asking the President on her supposed mandate,” Panelo said.

Reacting to Robredo’s firing, PDEA chief Aquino said in a separate statement on Sunday: “PDEA respects and believes in the wisdom of the President. Whatever happens, PDEA will continue to carry out its mandate to rid the country of illegal drugs with utmost sincerity and integrity.”

Right after Robredo accepted the ICAD post, Panelo had said she would be given access to documents and intelligence reports on the anti-drug campaign.

But he later claimed that giving the Vice President access would “imperil” national security, to which Robredo gave an assurance that she would not disclose state secrets or sensitive information. (READ: State secrets? De Lima, Lagman slam Duterte for restricting Robredo)

On Sunday, Panelo said, “Given the transparency of her motive to politicize the issue, the intention of the Vice President to seek access to confidential law enforcement information cannot be given the benefit of the doubt as being free from malice or manipulation.”

Malacañang was irked as well after Robredo met with the United Nations Office on Drugs and Crime, among others, to tackle a health-based approach to the drug problem. Duterte has frequently slammed foreign officials who have criticized his bloody anti-drug campaign.

Panelo again hit these meetings with foreign officials, claiming on Sunday that the Vice President was “unduly baiting international attention on the matter, particularly from persons or entities that know little or none at all about our situation.”

In accepting the post, Robredo had said that her primary consideration was the chance to help put an end to the deaths. Her allies, however, questioned Duterte’s motives for appointing Robredo, saying it seemed that Malacañang did not want her to succeed. (READ: 5 fatal obstacles in Robredo’s target of a deathless drug war) – Rappler.com